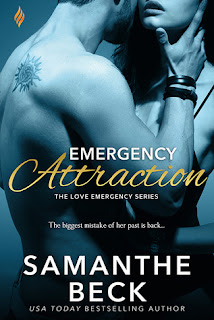 Ten years ago when Shane Maguire chose the Marines as his escape from some trouble of his own making, he only regretted one thing—leaving Sinclair Smith behind. Despite his best intentions, she ended up as the one that got away. Now he’s back, determined to reclaim everything he gave up, including Sinclair.

Sinclair is immune to Shane’s charms. She’s immune to stolen kisses behind the gym. And she’s definitely immune to that maneuver he did in the back seat of his car… Okay, maybe her hormones are susceptible, but she has absolutely no desire to risk anything on the bad boy who broke all his promises.

When a little emergency lands her at his mercy, he offers her a deal she can’t refuse. And this time, she’ll show Shane what it means to be left wanting…

Each book in the Love Emergency series is a standalone story that can be enjoyed out of order.

Samanthe Beck is one of my favorite Entangled Brazen authors - and adult romance authors in general. I haven't read a book of hers that I didn't enjoy, which is saying something! Some books have been better than others, but in general, her books work for me. I read the first book in this particular series (Emergency Engagement), but passed on the second book (Emergency Delivery). I almost passed on this one as well (for reasons I'll talk about!), but I'm glad I didn't. This book was a quick, enjoyable read.

Shane Maguire and Sinclair Smith grew up together in a small town, and when they were teenagers, they shared a powerful connection beyond physical attraction. But circumstances led to Shane joining the Marines and Sinclair staying behind. Ten years later, Shane is back, working as in risk management for emergency planning. It's been ten years but Shane's feelings for Sinclair haven't changed, and even though her left her, Sinclair's feelings haven't changed either. She can deny it all she wants, but their chemistry hasn't cooled and the pair have missed each other. But Sinclair might not be ready to give Shane a second chance, even if Shane is committed to staying with her.

One of the reasons why I almost passed on this book is because it's a second-chance romance, and I really don't enjoy second-chance romance novels. I hate all the drama and angst and hurt - someone is always hurt (usually both of them), and usually it's because of miscommunication. In this book's case, the second-chance aspect was not as dramatic and angst-ridden as I'd expected! Sure, there were painful, heartbreaking parts to Shane and Sinclair's mutual past, but the book was fairly low on drama.

Shane is such a good guy, and clearly very different than at eighteen. Years in the military straightened him out and made him a stronger, better person. For years, he sent Sinclair letters, trying to reach out, but she never responded. But Shane never stopped loving her, thinking about her, wanting her. Ten years later, Shane is persistent, protective, thoughtful, and a little naughty. He's a sweet guy who is incredibly patient with Sinclair.

Sinclair has ten years' worth of pain stored up, and she blames Shane. She lost faith in him when she never heard from him (his letters never reached her), and thought he didn't care about her anymore. Ten years later, she's still incredibly angry with him, and very hurt. Sinclair is a tough lady, but she has been through a lot, and she has walled herself off since Shane left to join the Marines. I didn't totally like her, but I understood her. Her hurt and pain were legitimate, even if she was a little unreasonable with all of that blame she directed at Shane.

As with every second-chance romance, there is a lot of communication between the pair about the past, and mistakes they made. I was happy to see both of them work things out slowly but surely. I was especially happy that Sinclair recognized that she was also in the wrong, and that not only did she have to forgive Shane, but he had to forgive her. The blame went both ways.

Shane and Sinclair have a lot of chemistry between them! Their passion for each other clearly never wore off, even with ten years of time and distance between them. Honestly, that's impressive and I love how the author brought about the chemistry and tension. I love how persistent and patient Shane was, because Sinclair was trying really hard not to budge with him. There are a few pretty hot scenes in this book (and some shorter semi-hot scenes). Beck always does a great job with the sexy times!

The climax involves a certain trope that I hate, but I did not mind it, in this book. It should have bothered me (like it did in a previous book in the series) but in this case, it seemed to work for the story. And the climax in general is relatively drama-free, and I like how Sinclair knows she is in the wrong, as does Shane.

In general, this was another Beck winner for me. Great characters, good character development, a good balance of emotional and physical growth between the characters' relationship, and a steamy romance, that did not disappoint. I also really liked the epilogue, which featured the three couples of this series (Beau and Savannah, Hunter and Madison, Shane and Sinclair). So much cute!

More steamy scenes would have been great (or maybe make the abbreviated scenes less brief). Also I mentioned that I didn't totally love Sinclair, though I understood her. I stand by that. She was a little too standoffish and sometimes mean, when it came to Shane. Poor guy! He didn't deserve all of the negativity and blame.

I can't speak for Emergency Delivery, but I'd recommend this entire series! This book isn't my new favorite or anything, but it's a great, satisfying novel. If you're looking for a quick, steamy, second-chance romance novel, this is one for you!

4 stars. I'm hoping Beck will continue writing books in the Compromise Me series, because those books are awesome! The first book, Compromising Her Position, is one of my favorite Beck books. I recommend it!