Review: The Enforcer by HelenKay Dimon 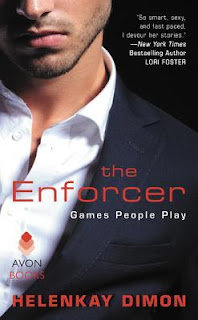 Security expert Matthias Clarke hunts down people who don’t want to be found. His latest prey: the sole survivor of a massacre that killed his brother years ago. Kayla Roy claimed she was a victim of the carnage. Then she disappeared. Matthias thinks Kayla may have actually been the killer—and he wants justice.

Kayla Roy never stays in one place too long and never lets a man get too close. But keeping Matthias at arm’s length may be impossible. Dark and enigmatic, Matthias draws Kayla in from the start. She knows nothing about his connection to her dark past, or his thirst for vengeance. She only knows their attraction feels overpowering—and very dangerous.

Matthias’ suspicions about the sensual Kayla clash with his instinct to protect her, especially when he realizes her life is in danger. But Kayla’s not looking for a savior—especially one who seems hell-bent on tempting her down a lethal path.

Last year, I read The Fixer and I liked it. It was a new HelenKay Dimon favorite of mine, but I enjoyed it a lot, especially for its originality and uniqueness. I don't read a ton of romantic suspense, but I've enjoyed the ones I've read, especially those by Dimon. The Enforcer was no exception! If anything, I enjoyed this book even more than I enjoyed The Fixer.

The Enforcer is the story of the enforcer, Matthias. He owns a security company and he is an expert at what he does. Right now, he is interested in finding Kayla Roy, sole survivor and former suspect of a brutal massacre (in which his brother died). But when he finds her, he quickly realizes that she didn't do it, that she wasn't and isn't capable of such a crime. Kayla has been running and hiding for years since the horrible massacre in her house at college seven years ago. Someone has been stalking her, leaving threats and watching her, no matter where she goes. When Matthias shows up, she isn't sure who he is, but some part of her knows he isn't here to hurt her. Matthias realizes that she isn't the murderer, and when Kayla's apartment is broken into and trashed, he also realizes that he isn't going to walk way. He will protect her at any cost, even if she doesn't want his help. Matthias isn't backing down, and Kayla isn't going to run and hide anymore.

This book was so entertaining, even for a romantic suspense novel! Well, that's not to say that suspense novels can't be entertaining. But often times, they are tense and a little odd and creepy. This book had tense moments, and a good build-up to the big reveal of the culprit, but it was also fun to read. That's one of the many things I love about romance novels - the tone of the book can still be fun and somewhat light, no matter the content of the book.

I love Matthias and his anti-human self. He isn't really antisocial, but he tries to avoid people. He would much rather be working through some security problem or puzzle or case in his office, than dealing with people. Matthias is similar to Wren (from The Fixer), because he is careful with his words, doesn't say anything he doesn't mean, is direct and honest, and sometimes doesn't have good people skills. Matthias is commanding and bossy and very used to getting his way. He also dresses really nicely and has nice manners. I adore him.

Kayla is the perfect match for Matthias. She is headstrong, independent, bossy, and doesn't take anyone's crap (definitely not Matthias's). She's very smart too, and she has good instincts. Sometimes Kayla is a little too bossy and a bit mean to Matthias (like, one or two times), but she does well to correct her mistakes and/or feel bad about them. I like that she is cautious with him and doesn't trust him immediately, but at the same time, she lets him in.

Kayla is the type of girl who doesn't like to ask for help, and Matthias is the type of guy who will help you whether you like it or not. They are perfect together! They have a lot of back-and-forth banter and comebacks (mostly Kayla, since Matthias is too sophisticated for comebacks - so it seemed). There is a lot of tension and chemistry between them from the start. It was funny to see Matthias do a 180 in terms of his opinion of her (he was hunting her because he thought she was responsible for the murders), but it was also funny to see Kayla do a 180 in terms of her opinion of him (she knew something was off about him and she thought he was a bad guy, but realized that he was on her side).

Suffice it to say, I liked their dynamic. Matthias is demanding, commanding, bossy, and used to people listening to him and being afraid of him. Kayla is independent and bossy herself, and she doesn't like Matthias's high-handedness at first. But she's also not stupid enough to think that she can take of herself after her stalker trashes her apartment. I like that she accepts his help. I also like that he gets put in his place every now and then by her.

Dimon's books are usually pretty hot, but like The Fixer, this one was not nearly as hot as her usual. But still, the chemistry between Matthias and Kayla was on fire, and there were a few steamy scenes that were well-written. The romance was well-written too, and there wasn't too much drama.

The "suspense" part of this romantic suspense novel was pretty interesting! I had a feeling about the culprit when that particular character was first introduced, BUT I never guessed the entire climax. Like, I guessed part of it correctly (in terms of the culprit), but not all of it. I don't want to give anything away so I'm being purposefully vague. I like how the big reveal wasn't entirely what the author set us up to believe! It's more than that. Good for Dimon! This book had a lot of action, plot twists, and a puzzling mystery (several, really). I was hooked! I could not put this book down until I was finished.

Overall, I enjoyed this book a lot - probably more than I enjoyed The Fixer, which I liked (though the female protagonist got on my nerves sometimes). I really hope there will be another book in this series (Garret + Lauren?), because I am here for it!

I mentioned earlier about how I wanted the steamy scenes to be more, well, steamy. I've read other Dimon books outside this series and those books were smoking hot! This book (and The Fixer) weren't super hot. I think I have too high expectations. Someone new to Dimon might think these books are plenty hot, so don't mind me!

If you like romantic suspense, give this series a chance! But in general, I highly recommend Dimon's books. Her stories are always so creative and her characters are (for the most part) really likable. Strong, fierce females and swoony, sexy alphas. My favorite of hers is Mine!

4 stars. Another Dimon winner! I had a feeling I would enjoy this book and I definitely did. I'm excited to see what Dimon comes up with next! Hopefully a book three in this series.