Review: What to Say Next by Julie Buxbaum 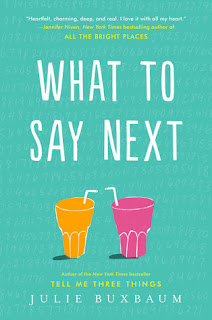 Sometimes a new perspective is all that is needed to make sense of the world.

KIT: I don’t know why I decide not to sit with Annie and Violet at lunch. It feels like no one here gets what I’m going through. How could they? I don’t even understand.

DAVID: In the 622 days I’ve attended Mapleview High, Kit Lowell is the first person to sit at my lunch table. I mean, I’ve never once sat with someone until now. “So your dad is dead,” I say to Kit, because this is a fact I’ve recently learned about her.

When an unlikely friendship is sparked between relatively popular Kit Lowell and socially isolated David Drucker, everyone is surprised, most of all Kit and David. Kit appreciates David’s blunt honesty—in fact, she finds it bizarrely refreshing. David welcomes Kit’s attention and her inquisitive nature. When she asks for his help figuring out the how and why of her dad’s tragic car accident, David is all in. But neither of them can predict what they’ll find. Can their friendship survive the truth?

My sincerest apologies to the publisher, who sent a review copy to me, probably with expectations of me reviewing this book about a month before publication. It is April 18th and I hate to review a book almost three months in advance, but I had been dying to read this book for so long and I've had it for months and I couldn't wait any longer! I had fairly high expectations for this standalone, after the perfection that was Tell Me Three Things, and I was not disappointed.

David can best be described as a loner in high school - he is always by himself, in his own world, with his headphones and his notebook and his incredible IQ. David is on the autism spectrum, with high-functioning autism, possibly Asperger's. No one outside of his family and his guitar tutor really talks to him. Until one day, when Kit Lowell sits at his table at lunch. Kit's father died a month ago, and she is grieving in her own way. She pulls away from her friends and wants peace and quiet - which is why she chooses to sit with David, on the day one month after her father died. David is incredibly honest and he doesn't quite have social skills like everyone else. But Kit likes this about him, and realizes that she enjoys his company. And David - David realizes that he enjoys talking to Kit. He has always liked her, but talking to someone like they do is new for him. This unlikely friendship blossoms, but it's not without its problems. But both Kit and David will learn things that they were not expecting, when it comes to Kit's father's death, and they may not be prepared to deal with what comes next.

I think I loved pretty much everything about this book. David, Kit, David and Kit, friendships, family, the "story" (that's a vague term) - everything about this book clicked for me. I don't usually like tough-issue YA contemporary novels, but I really enjoyed this book. Though the book should have carried a dark, depressing tone, it didn't, and I think this definitely boosted my enjoyment. This is a light book (though not fluffy), but it also addressed the deeper issues with a more serious tone. I also loved that it was written in alternating POVs (David and Kit's first-person POVs).

I'm going to start with David. Ahhh, David! I adored David. You can tell right from the start that he is different. He is incredibly intelligent, and extremely literal, and his social skills and mannerisms are very different compared to many of the other high school students. David has high functioning autism, but you might never know. Unfortunately, the kids at school have always known, and in middle school, many boys were really cruel to him. But David has really grown since then, and he is doing much better in terms of discerning "good" people from "bad" (in terms of their intentions toward him). David is a sweetheart! He is also kind of a superhero - he practices karate and krav maga (though why he learns/practices is heartbreaking).

Also, I think Buxbaum really captured the struggles of being autistic (David) and having an autistic child (David's parents). So much prejudice and judgment rolled off everyone around David, which infuriated me - but it happens in real life all the time, which is a big part of why it made me mad. The author included so many obvious and subtle reminders of the way society treats those who are intellectually different or "weird".

On the other hand, we have Kit Lowell. Her father died a month ago in a car accident, and Kit has not been handling his death well (that sounds insensitive, I'm sorry!). Kit shuts out everyone, including her best friends and her mother. Talking to David helps Kit, and his friendship matters a lot to her. Kit is such a strong and tough girl, and my heart hurt for her over and over. But I also loved how kind and "normal" she was with David (i.e. she didn't really treat him any differently compared to anyone else). Kit is a good person as well.

And what's neat is that Kit is half-Indian! Her dad is (was) white, and her mom is Indian (as in India). I'm Indian and I always get tickled pink when I stumble upon an Indian main character. You wouldn't  be able to tell (sorry to stereotype, but "Katherine Lowell" doesn't scream Indian girl), and she's half-Indian (as opposed to "full" Indian),  but I love how important her's mother culture is to Kit. Well, the food definitely is. But there are lots of sprinkles of Indian culture and Sikh religion throughout the story, which were subtle and much appreciated. Kit's identity isn't really part of the story (meaning, she isn't struggling with her mixed ethnicity), but I like that it comes up every now and then.

Also, it's cool that the author did her research in terms of Indian culture, to really nail down Kit's mom. Kit herself isn't as "Indian" as her mom, but the author still made a point to make Kit's mother's culture and past a part of the story. I think the author did just fine with that.

I loved seeing David and Kit's friendship develop! At first it's tentative and awkward, with the two of them trying to navigate each other's worlds. But they fit well together, and they understand each other. I've not read too many books with a protagonist with autism (of any part of the spectrum), so it was very interesting for me to read from David's POV. I loved seeing Kit through his eyes, as odd as his mind is. The progression of their relationship is sweet, from friendship to something more.

The romance was swoony in a subtle way. There isn't a ton of kissing in this book, but it's a swoony book nonetheless. David is such a sweetheart. Kit is great, but guys, DAVID.

Did I mention that David is seriously good-looking and tall and super muscly from all of that karate and krav maga? Yeah. Intelligent, sweet, tall, muscular? He's my type, I can tell.

Another thing worth pointing out is Kit's relationship with her (existing) friends. She pushes them away, and you would have thought that they would turn into mean girls and ignore her and whatnot. And they did for a second, but I love that they were patiently waiting for her to come back to them (so to speak), and they stuck with her. And they eventually accepted David, which was nice (although took them long enough). I hate Kit's male friends - they are walking cliches of high school douchebags that I hated (sorry not sorry). Buxbaum captured those guys pretty well.

The climax comes up pretty quickly, and it involves something about Kit's father's death. Buxbaum put the together such that Kit's father's death was slowly unveiled to readers, and you knew a big thing was going to be revealed at the end. It seemed periphery compared to all of the changes happening to and between Kit and David, so the big thing took me by surprise. It was heartbreaking, but it made sense. The ending in general is bittersweet, but also hopeful. It made me smile. It's the type of ending that is incredibly realistic, but also very satisfying. I loved it - and the book!

More kissing! This book is fairly short (though incredibly dense), and what better to plump it up than with kissing scenes? (This is most definitely an Alyssa complaint, don't mine me!)

4.5 stars -> rounded down to 4 stars. I'm a picky rater. I can't wait to read more from Buxbaum! She is wonderful and so are her books. I think I may try her adult books, though I am on cloud nine with her YA books and might stay content with just these. Heart eyes for days!