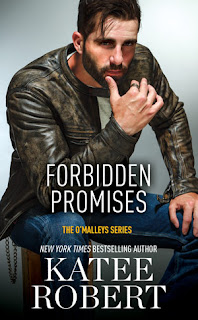 From the start, I knew that this would be a very different book compared to the previous three. I loved The Marriage Contract, and enjoyed The Wedding Pact and An Indecent Proposal. The books have been incredibly engrossing, entertaining, and sexy. This book was all of those things, and yet it is distinct when compared to its predecessors. I loved Jude and Sloan's story - I think theirs is my second-favorite of the series now!

Sloan O'Malley, the fifth O'Malley child in a brood of seven, has finally gotten out. With the help of her older brother Teague, she has fled Boston and is neatly ensconced in a small seaside town in Oregon with an old woman - Sorcha Sheridan. Everything is new and interesting to her... especially her next-door neighbor. Little does she know, Jude MacNamara has been watching her new house. He has been tracking Colm Sheridan's sister for a long time, for revenge. And now he has found her, but he didn't expect Sloan O'Malley to appear. Sloan doesn't know at first who Jude really is, but it doesn't matter: one looks is all it takes. Jude and Sloan can't keep away from each other. But it's not long before the dangers of Boston catch up with Sloan, and Jude's own deals catch up with him. Jude will have to choose between his plans of revenge and his growing feelings for Sloan, and Sloan will have to decide if Jude is worth it.

This book had a bit of a different tone, compared to the others. Maybe because most of the book is far-removed from Boston, and all of the crime stuff in Boston? Not that the crime stuff doesn't come up - remember, Jude is very much involved in all of that (not that Sloan knows, at first). But the crime and the Russian mafia and all that aren't physically present in most of this book. Which makes the story a little more about our couple, especially in the first half.

I always felt bad for Sloan in the previous books, but I didn't love her, necessarily. She seemed a bit bland to me, and not outwardly strong as her older sister Carrigan, or her sister-in-law Callie. She isn't as stubborn and rebellious as her younger sister Keira. She's just Sloan. young and innocent and desperate to get out of the crime that surrounds her life. Right? Well. Sloan is much tougher than she outwardly appears, and she is her own brand of strong.

Jude is a rough, gruff, no-nonsense hardened man who is the last of a dynasty - the MacNamara's. He is bent on revenge and wants nothing in his way, so he isn't quite sure what to do with his instant attraction to Sloan, at first. But he is also a man of action, and he likes to have all of the control. Jude has made himself believe that he is a cold, merciless, heartless man who isn't worth more than his revenge, but that isn't true at all. This book is as much about Jude's self-worth as it is about Sloan's.

The two of them together are incredibly hot! The attraction and lust are there from the start. The sex starts off very early, which I don't always love, but I was fine with it in this book. The first half of the book is very focused on Jude and Sloan's physical attraction to each other, and there is a loooot of sex. The second half of the book deals more with their growing emotional connection, and the growing threat of Dmitri Romanov. But back to June and Sloan's chemistry - so hot. Jude is 100% alpha, and Sloan is... well, she isn't a meek and submissive innocent, but she is innocent and she likes it Jude being controlling and demanding, when it comes to sex. The two of them fit perfectly together and in so many ways.

So the physical attraction started off very quickly, but the emotional connection took longer. I liked seeing Jude and Sloan slowly trust each other and lean on each other. They don't know each other for very long before they have to make several decisions about Sloan's safety. But they begin to trust in their feelings for each other, which was sweet to see.

There is one trope that appears in this book that I usually hate - but I found that I did not mind it at all, in this book. The presence of this trope makes sense to me, and its purpose is something I understand. I love how the author switches up romances and relationships and keeps things original or at least on shuffle.

Don't think that this is purely a romance novel! It's dark romance, and the crime aspect of this series does not disappear at all, don't worry. The second half of the book really picks up speed with several crime-related plots, both back in Boston and in Oregon. The ending is pretty explosive! In terms of crime, and in terms of Jude and Sloan's relationship. Not in a bad way!

I love how we don't just get Jude and Sloan's POV. Occasionally (very rarely), we read from Aiden's, and Dmitri's. While Aiden has definitely grown on me, it is Dmitri who I have really gotten to like. I can't wait to read his and Keira's book (O'Malleys #6)! The snippets in this book between him and Keira are downright tantalizing.

I'm going to wrap this up and end with saying that I really enjoyed this book. It's my second-favorite, or possibly my favorite, tied with The Marriage Contract (I don't know that any of these books will touch Teague's - though maybe #6 will!). This book was different compared to the rest of the series, and so, so good.

Nothing specific that I can think of! Though this book is not getting a five-star rating.

4.5 stars -> rounded down to 4 stars. I am looking forward to reading Undercover Attraction (Aiden and Charlie's story)! But more so, Dmitri and Keira's, which publishes in February 2018. This series is easily one of my favorite adult romance series of all time!