Review: Dark Breaks the Dawn by Sara B. Larson 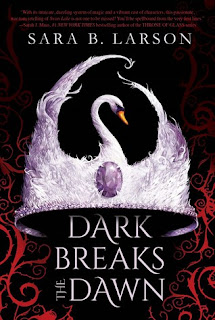 Dark Breaks the Dawn by Sara B. Larson
Book One of an untitled duology
Publisher: Scholastic Press
Publication Date: May 30, 2017
Rating: 3 stars
Source: ARC sent by a fellow blogger

On her eighteenth birthday, Princess Evelayn of Eadrolan, the Light Kingdom, can finally access the full range of her magical powers. The light looks brighter, the air is sharper, and the energy she can draw when fighting feels almost limitless.

But while her mother, the queen, remains busy at the war front, in the Dark Kingdom of Dorjhalon, the corrupt king is plotting. King Bain wants control of both kingdoms, and his plan will fling Evelayn into the throne much sooner than she expected.

In order to defeat Bain and his sons, Evelayn will quickly have to come into her ability to shapeshift, and rely on the alluring Lord Tanvir. But not everyone is what they seem, and the balance between the Light and Dark comes at a steep price.

In the first book of a remarkable duology, Sara B. Larson sets the stage for her reimagining of Swan Lake -- a lush romance packed with betrayal, intrigue, magic, and adventure.

I didn't hate this book, but I didn't love it. Words that everyone hates to hear, because they don't really mean a whole lot. Was this book really good until the ending? Was it a mix of positives and negatives? Was there one or two big things that threw everything off? In this case, there were positives and negatives. And I suppose the ending was pretty terrible (cruel), though it's so dramatic and ghastly and it leaves room for so much to happen in book two.

I've read Larson's debut trilogy (Defy, Ignite, and Endure), and I enjoyed the series. I have been pretty excited about this new book of Larson's for quite some time. I don't know much about Swan Lake, but I didn't care about that because the book sounded great, and I'd had good experiences with Larson's books in the past. This book, while fairly intriguing, was not Larson's strongest.

Princess Evelayn has just turned eighteen and gained full access to her power. She is thrust into ascending the Light throne when her mother is killed in battle, fighting King Bain of the Dark Kingdom. Evelayn manages to keep control of the Light, but she must quickly come up with a plan to defeat King Bain and his sons. But Evelayn is under a lot of pressure, especially to hone her abilities and to shapeshift. With the help of her trusted General, her best friend, and Lord Tanvir, Evelayn sets out to defeat her Dark enemy and restore balance with his heir, or die in the process.

It took a little while for the story to grow on me - and Evelayn as well. The story moves at a very slow pace initially, and I can't say I was all that interested. I think things started to pick up for me when Evelayn and Tanvir's relationship started to pick up. I'll get to that. Anyway, the story starts and follows Evelayn's ascent to the throne, and how she handles the pressure. It's so much pressure, to be thrust onto the throne without being able to grieve, to be thrown into the middle of a war, to be expected to be strong and without fear or weakness, to be expected to bind to a male and produce an heir. So, yeah, the story wasn't interesting at first, but then it really began to shape up with all of Evelayn's duties and worries and plans.

Evelayn seemed distant and cold to me at first, and I didn't really like her. But then I started to understand her better. She takes on an enormous amount of pressure, and the author makes perfectly transparent how much Evelayn struggles with it all. But Evelayn becomes a much stronger, commanding leader, as the story goes on.

This book is written in third person, and there are multiple POVs. We read from Evelayn's, Tanvir's, Ceren's, and even Lorcan's (the heir of the Dark Kingdom/son of King Bain). Evelayn's POV dominated, but Tanvir's was sprinkled throughout, and Ceren's (Evelayn's best friend). Lorcan's POV was the most boring. Lorcan has no affection or pity for the Light Kingdom, but he also hates his father. Lorcan is cold and sly, and an interesting but merciless villain of the story.

I adored Tanvir. He's just so good, and kind and noble and sweet. Don't get me wrong, he is also fiercely protective and war-hardened. He's the High Lord of a set of lands, but he is also a soldier and and very good with his power and his skills in fighting and battle. Tanvir almost seemed to be too good to be true, with his kindness and gentleness with Evelayn, but I rolled with it. I like him too much, and it's not hard to see why.

The romance is sweet. At first I thought it developed too quickly, but weeks pass before things really progresses. Time moves quickly in this novel, but we don't get to see each and every day. Tanvir and Evelayn are a great couple, and very good for each other. I like that Evelayn kept questioning why Tanvir wanted her, and I like how persistent and yet respectful Tanvir was. While this isn't a favorite romance of mine, it is a cute and shippable one.

I also liked Ceren's budding romance with the son of an important lord. So cute!

The ending is pretty cruel and I don't love it, so I won't really talk about it. But it's a cliffhanger. So I may read book two, especially since this is only a duology series.

There are a bunch of things that I didn't really enjoy about this book. I've already mentioned that the pacing of the story is slow. The beginning is dreadfully boring. You know it's bad when you don't even care that an important character just died (Evelayn's mother). I really only started to get interested when Evelayn's feelings for Tanvir start to progress.

This story is kind of cliche. The girl magically comes into her powers when she turns eighteen. There is a Light Kingdom and a Dark Kingdom (i.e. some kind of balance). They are at war. There is always a war. The King of the Dark Kingdom is an evil caricature. Honestly, this book is full of cliches, and they weren't necessarily welcome ones. I didn't mind, but I also didn't like them.

I'm also very confused about the species of these people. They aren't human - they are Draíolon, and I have no idea what that means. It would appear that some of them have blue skin and lavender hair and strange-colored features? I'm not really sure. I couldn't get a handle on the physical aspects of the Draíolon, or anything about them, really. They are magical, immortal, and there is a balance of them. That's about it. I'm very confused about what they actually are though.

Honestly the world-building in general is a little confusing for me, or just completely absent. It seems like a typical, cliche YA fantasy world, and yet, I really couldn't get a good grasp of the world. There were so many strange things that seemed out of place. Maybe I'm missing something?

I'm not all that convinced that there won't be a love triangle! I love Evelayn and Tanvir and I ship them so hard, and there is no hint of a love triangle in this book. But because Lorcan and his brother Lothar also have POVs in this book (in addition to Evelayn and Tanvir - and Ceren too, not that she is part of this), I'm a little nervous. Lorcan seems like an off-his-rocker kind of villain, but Lothar... I could see the author somehow working Lothar into Evelayn's path. They have never met and she has never seen him before, but I just have this feeling. You know? I want to write off Lorcan altogether but somehow, Lothar... he has too much pity and sympathy for Evelayn. Despite not knowing her and her never having seen him before. I'm just not convinced. I don't know though.

I can't say I fully recommend this book, even if you are a YA fantasy fan. It's an interesting concept - a Swan-Lake-inspired fantasy tale about a girl who has loved swans all her life and has taken on the difficult task of ruling the Light Kingdom. This book wasn't totally impressive though, and it wasn't always fun to read (sometimes I was bored or just didn't care). I'd either wait until the second book publishes, since this is part of a duology, or skip the series altogether. While I enjoyed some aspects of the story a lot, I can't say that this is a new favorite or a life-changing story.

3.5 stars -> rounded down to 3 stars. It's an okay book, but not great, and certainly not worth gushing over. I really wish I was gushing over the book because I was very prepared to be doing so, but ultimately, I'm a little disappointed. I think I will still read the conclusion though!