Review: A Fool For You by Katee Robert 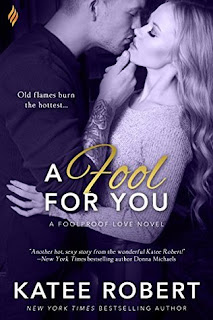 I'm a little frustrated with this book. I loved Foolproof Love and Fool Me Once, but this book... this book was disappointing. Daniel and Hope's story has been a long time coming, and the buildup has been fantastic as the series went. But actually getting to their book (this one), and experiencing the story... disappointing.

I suppose I liked the HEA, but that was pretty much guaranteed. I do like Katee Robert's writing, her world-building, and the characters she builds (in general). But this story was incredibly disappointing, because it just wasn't fleshed out (among other things). The lack of... everything makes this review so difficult to write. But here I go!

This story was supposed to be the "big" one of the series, the story that was a long time coming. Hope left town thirteen years ago, after a car accident left her knee broken up. Her parents moved with her, for her to get better treatment. Her brother died in that accident. Daniel had been driving. Daniel hasn't tried to contact Hope in those thirteen years, because he blames himself for the accident, and is wracked with guilt because John died and Hope was injured. Hope never contacted Daniel because she thought he couldn't stand to look at her anymore.

In any case, Hope comes back to establish a scholarship in John's name. Daniel and Hope have sex once, the condom rips, and six weeks later, Hope is back because she is pregnant. Daniel is determined to be in her and the baby's lives, and he wants her to stay in Devil's Falls. But Hope doesn't want any of this. Or does she?

First complaint - this book was way too short. 132 pages or so - not enough. The story felt so incomplete, like there were key events that were missing. I felt like Hope and Daniel needed to have gone through MUCH more in this story, before the HEA.

Throwing in the pregnancy complicated things, and I felt like Robert didn't handle this pregnancy situation well at all. Things felt way too rushed. Only a week or two after Hope finds out that she is pregnant, the pair are googly-eyed in love again, and Daniel wants to marry her, etc. It was just badly done; there was no development, nothing that made me believe that they were in love again, that they wanted to be married, that they weren't just doing it for the baby.

And the big angsty stuff - honestly, I didn't get it. Daniel has a complex over the car accident, and I get that. I understand his guilt. I do not understand how the author twisted this to make the climax (the big fight) all about Daniel's... guilt? Basically I don't understand the conflict, because the author doesn't really do a good job of explaining to us what Hope's problem was (at the climax). I don't understand why Daniel suddenly wanted to leave, and then he changed his mind, and then Hope changed her mind... I was getting whiplash. There was no basis to all this crazy back-and-forth.

I did not like Hope. She seemed like a child, stomping her feet in the ground, trying to seem "tough" and independent, but it was obvious that she needed someone. I didn't like how she was acting to Daniel. It was like she didn't want to stay in Devil's Falls just to spite him... don't do that. The baby is much his as hers. Hope was so difficult and refused to really listen.

The communication between Hope and Daniel is atrocious. Honestly, 90% of the problems in this book could have been solved with one conversation. Which Hope refused to have. Which Daniel refused to push.

And then this book was just NOT sexy at all. I kind of expect a certain level of steam now, when it comes to Katee Robert's books... this book was totally lacking. This book was so abbreviated and short, and NOT steamy. No character development, no relationship development, and very flat sex scenes. Come on!

While I totally recommend Foolproof Love and Fool Me Once, I do not recommend this book. It's better if you skip it, especially for that price - it's not worth it. This book was incredibly short, especially compared to the first two books in the series (they were much longer!). I think this is the first real disappointment that I've had from Katee Robert - but trust me, her other books are really good! Especially her O'Malleys series.

2 stars. I can't believe I'm giving a Katee Robert book such a low rating! I'm sorry if this review didn't seem to make sense - but trust me, it was as hard for me to write as it was for you to read. There was so much wrong with this book. I guess I'm just happy that it ended well! The series is a good one, but not this book.