Review: The Row by J.R. Johansson 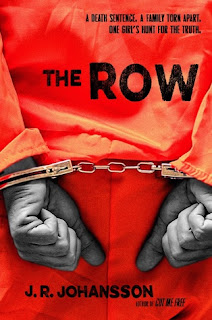 A death sentence. A family torn apart. One girl’s hunt for the truth.

Seventeen-year-old Riley Beckett is no stranger to prison. Her father is a convicted serial killer on death row who has always maintained that he was falsely accused. Riley has never missed a single visit with her father. She wholeheartedly believes that he is innocent.

Then, a month before the execution date, Riley’s world is rocked when, in an attempt to help her move on, her father secretly confesses to her that he actually did carry out the murders. He takes it back almost immediately, but she cannot forget what he’s told her. Determined to uncover the truth for her own sake, she discovers something that will forever change everything she’s believed about the family she loves.

WOAH. I had a feeling that I would enjoy this book, but dang. I really really enjoyed it. I've read all of Johansson's published books - Insomnia, Paranoia, Mania, Cut Me Free, and now this one - and I have to say, despite my varying ratings, this one is probably my favorite of her books. This book was so engrossing and a little twisted, and I couldn't read it fast enough.

Riley is used to being the girl whose father is on death row. When she was six, her father was convicted of murdering three women. Eleven years later, he has maintained his innocence, and Riley has grown up believing that he will be released someday, because he didn't do those crimes. But when the latest hearing goes poorly, and her father only has a month before execution, Riley scrambles to find out more details about the case. She was so young when everything went down - what really happened? Riley digs deep to uncover shocking truths about the case, her parents, and the murders.

I could not put this book down, and read it in one sitting. It's getting harder and harder to just sit for hours and read, without getting up to do this or that, work or schools, etc. But this book had my attention and held it until the end. If I say nothing else, let me say that this book was so engrossing and page-turning. Johansson sets the tone and there is no way I was putting this one down until I was finished. I needed answers as much as Riley did!

I liked Riley and was totally behind her drive to find answers. Her father has four weeks to live, and she needs some of the blanks to be filled. One thing that I really liked about her was that she knew she wasn't going to make a difference in the case or find some groundbreaking clue that none of the lawyers saw - she wanted answers for herself, because there were so many things kept from her because of how young she was when the murders first happened. Riley is so tough and strong, not in a physical way necessarily, but mentally and emotionally. She's grown up visiting her father for two hours on a Friday. She's grown up with a stressed mother who has gotten fired from one job to the other because of her husband. Riley and her mother have dealt with so much, but both have stood behind Riley's father every step of the way. The family loyalty was pretty great, especially on Riley's part.

The mystery of it all was so fascinating. Did her father kill those women? Did he not? If he didn't, who did? Why would he confess that he did do the murders, but then take it back? One way or another, there are only four weeks left, and Riley wants answers. I loved how Johansson spun us round and round, bouncing suspicion from one character to the other. The only person who I felt was supremely innocent was Riley, and Jordan.

Riley meets Jordan at the mall one day, early in the book, with his little brother Matthew. After this encounter, Riley and Jordan become friends. Riley tells Jordan about her father and the case, and Jordan wants to help her. Jordan becomes a very important part of the story, and an anchor to Riley. He is sweet and caring, but also protective of her. He's such a nice guy, even with everything he has going on in his personal life. He is a good friend to Riley, and eventually a good more-than-friend.

Yup, there is some subtle romance in this book. Very minimal, but very sweet. I shipped Riley and Jordan from the start, and I'm glad to see things work out for them.

I won't say more about the case and who actually did it but... trust me, the build-up is worth it. You think you know what happened, and who did it, but you don't. I came up with so many potential suspects, and even towards the end, I guessed wrong. Johansson wrote this very well! Overall, I was really pleased with this book.

I can't think of anything specific that I didn't like!

I do recommend this one, if you like suspense novels! I don't seem to read much suspense/mystery novels in YA, so this was a welcome change. I like Johansson's novels but this one is probably my favorite. It's too bad it seems to be flying under the radar because it is such a fascinating, disturbing, and intriguing book!

4 stars. I am curious to see what Johansson will come up with next! I think this is her best yet, so I'm excited to see.