Review: Temporarily Yours by Diane Alberts 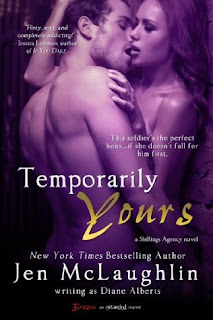 This marine's the perfect hoax…if she doesn’t fall for him first.

Stats whiz Kayla Moriarity knows her way around numbers and algorithms. Men, on the other hand, are unsolvable equations. Now Kayla’s en route to her sister’s wedding—alone and without the fictional boyfriend she invented for her family. Fortunately, her plane comes complete with complimentary cocktails and a ridiculously hot ex-marine in the seat beside her. And that’s all it takes for Kayla’s inhibitions to go sailing out the airlock...

Cooper Shillings has soft spot for people in trouble, but he certainly wasn’t expecting to land in it himself—and definitely not while getting naughty mid-air with a sexy southern belle. When he hears Kayla’s predicament, however, he offers his services as a stand-in boyfriend. After all, he’s heading overseas soon...and how could he refuse a little no-strings wickedness?

It’s the perfect plan. And all Kayla has to do is ensure her family falls for the ultimate bluff, without falling for it—and Cooper—in the process...

Even though I'm giving this book three stars, I enjoyed the story. Jen McLaughlin/Diane Alberts is one of my favorite adult contemporary romance authors, and she hasn't really disappointed me yet. While three stars is the lowest rating I've given one of her books, I'm still quite a fan of her and her books, and I'd still recommend any number of them. This one probably wasn't her best - but that's not the worst thing ever (especially since this one was one of her oldest ones).

This is the first book in the addicting Shillings Agency series. We are introduced to Cooper Shillings, an ex-Marine who is on his way to a new job in a private security firm. Awaiting the same flight in the airport is Kayla Moriarty, an actuary with a passion for numbers and being single, who is heading to her little sister's wedding. The problem is that Kayla lied to her parents and told them that she was bringing her "boyfriend"... but she doesn't have one. Cooper, who was sitting with her in the airport, offers to go to the wedding with Kayla. Neither of them are the one-night-stand types, but circumstances and fiery attraction bring them together for one steamy night together... and then another, and another. But Cooper is leaving for his new job overseas - will this fake relationship that is slowly becoming more real have a chance?

Cooper and Kayla meet within the first few pages of the book. Kayla hates flying, and she's very nervous. Cooper sits next to her while they wait to board, and they start talking. Cooper upgrades his ticket to first-class when he sees how nervous she is - so he can sit with her and distract her. This leads to a rather steamy plane ride... and then night at a hotel.

I liked Cooper so much; he's an ex-Marine, but he's 100% an honorable man in uniform regardless. He likes helping people, feeling like he is doing something. He hates failure, especially since his best friend Josh on-duty, and Josh's fiancee was completely crushed. Cooper is haunted by his friend's death. But Cooper is such a sweet guy, even though he hurts inside. He is selfless and considerate, and he's very charming. Like a Southern gentleman!

Kayla IS a Southerner, and she's has nice manners and a sweetness to go with that. She's an actuary, and she loves percentages and statistics. When she's nervous, she babbles and spouts numbers, and it's cute. Kayla is perceptive and sweet, and definitely a good match for Cooper. And vice versa!

While I thought the romance was a little rushed, I totally approved of the hot chemistry between these two. Phew! It built and built, and McLaughlin kept that tension going. In terms of the physical relationship, McLaughlin did not hold back.

As with the other Brazen novels, this book has a nice HEA. I love HEAs, and one of the reasons why I love Brazen books is because of the HEAs. This one pretty good!

The most important I'm going to say in this section is that this book was entirely too short. Less than 150 pages? It felt like a novella, but it was structured like a novel. The relationship between Cooper and Kayla could have been more developed, especially in terms of the emotional side of things.

I would have liked more detail at the end, as to the logistics of the situation. The story starts with Cooper leaving to go to his new job... the ending, while definitely a HEA, doesn't really give details as to how Cooper and Kayla's life will work. Where will they be living (Maine or North Carolina)? Cooper is doing that job - is Kayla in that location with him? I was a little confused as to how things worked out logistically - though you can assume that they moved in together or something.

Pretty much, the story and the romance could have been better written. Things felt a bit rushed, or just not there. The sexual tension was cooked up really nicely, but I definitely wanted more from the story and the characters.

I don't know if I'd recommend this book in particular, but I do recommend this particular series. I like McLaughlin's later books in this series - they are more developed, longer, but the romance is still very hot. I also like McLauglin's Sons of Steel Row series!

3.5 stars -> rounded down to 3 stars. I didn't love this one, so I can't give it 4 stars (or higher). But I did like it, and I'd still happily recommend this author's books. This series (the books I've read, of the series) has been pretty great!