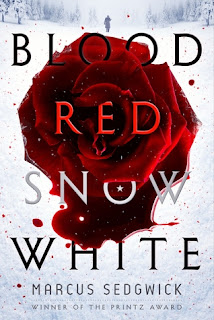 Russia wakes from a long sleep and marches to St Petersburg to claim her birthright. Her awakening will mark the end for the Romanovs, and the dawn of a new era that changed the world. Arthur Ransome, a journalist and writer, was part of it all. He left his family in England and fell in love with Russia and a Russian woman. This is his story.

I actually didn't know much about this book before reading it. I requested it but I admit, it was because of the cover, and the author's name. I've not read anything by Sedgwick, but I've heard of him, and have wanted to read something by him. So I went into this one pretty blind. I'm giving this book a so-so rating, but I liked it.

This book follows Arthur Ransome, an English journalist and writer, who was in Russia during World War I. He is caught in the wrong place at the wrong time, and finds himself caught up in the war. The Bolsheviks want him to send messages to England, and England wants him to spy on the Bolsheviks. Ransome will play a large role in the demise of Tsarist Russia, but also in the rise and fall of Lenin and Trotsky.

This novel is purely historical fiction, though it is somewhat of a fictional imagining/retelling. Arthur Ransome was a real person in history, as was all the characters in this book. It's interesting that this book is marketed as YA fiction, because this book starts with Arthur marrying his sweetheart, Ivy, and this was when he was in his mid-twenties. When I say historical fiction, I mean something like The Book Thief. This book was quite moving in its own way.

So the story begins with Arthur marrying Ivy, a girl that he fell in love with. They have a daughter. But Arthur starts to realize that he and Ivy never really loved each other, but rather, they were caught up and attracted to each other, but not necessarily in love. He leaves his family and goes to Russia, where he falls in love with the country. But soon he gets caught up in the war, being in Russia just as the war begins. It's bad timing, but Arthur writes a book and meets a woman that he falls for - for real this time. It just so happens to be Trotsky's secretary. Trotsky and Lenin want Arthur to spy for them, and the English want Arthur to spy on the Russians for them. Arthur leaves Russia, comes back, and eventually, decides that he and Evgenia need to leave Russia for good.

This was a great story to read, because while it was fictional, the historical events and the life events of Arthur Ransome are very real, and very much the same as the real events. The author clearly did his research on the life of Arthur Ransome, World War I, the Lockhart Plot, the Revolutions, the White Movement. Honestly most of the reason why I liked this book is because of the history. I love history, and I knew enough about Russia's role in World War I and their history at the time. I know the story of the Tsar and Tsarina and Rasputin, but it was interesting to see that play out in this book. The author's spin on the historical events is very creative.

In terms of the story, separate from the history (though I must say, you really can't separate the two), I liked it (the story) but found it a little slow and confusing in terms of timing. I'll talk about that later. As a story, there were some boring parts, but I was engrossed in all of the history, and wanted to know what would happen next (according to the story). It was interesting to see things from Arthur Ransome's (fictional) account, a bystander that played a heavy role in this history.

The story is about a man in his twenties/thirties, a man who makes a difficult decision to leave his wife and child in England, and come to Russia. There is a romance between Arthur and Evgenia (Trotsky's secretary). Usually I don't like the extramarital affairs thing, but it was obvious that Arthur never loved his wife, but really loved Evgenia. I don't know how feelings were in the real story, but I liked how the author brought about the romance in this book. Romance was very small in this book, so don't worry if you're not really a romance person.

I liked this book, and I have no regrets reading it. Historical fiction is fascinating and absolutely necessary in YA fiction. I hope this book will make it into classrooms and curriculum, because it would be worthy for sure.

I was trying to decide if I should give this book four stars or three, and I went with four stars. However, I was a little bored at times, though not enough to make me stop reading. I love history, and historical fiction, so I knew I was going to read this one from start to finish no matter how much it dragged. Lucky for me, I didn't really have an issue with the pacing, but I did think it was boring in a few spots. I've seen some reviews that were expecting a fairy tale, or the reviewers hate historical fiction, and were bored. I was bored because there were times when the story was genuinely boring - not because I can't handle history.

One thing that confused me was the jumps in time. The author doesn't jump around from past to present or anything like that, but sometimes the lapses in time weren't clear, so I was confused as to how much time had actually passed. Like, I didn't know that Arthur left his wife and child when the child was a toddler - four years after Arthur and Ivy got married. I didn't know how much time passed from Arthur leaving his wife and child, to Arthur escaping Russia with Evgenia (about six years). I didn't know how much time passed between each time Arthur left Russia and came back. I ended up going to Wikipedia and looking up some of the dates. I wish the author could have started each chapter with the date and time, or something like that. This IS fiction, so he could have manipulated dates how he wanted.

In any case, this wasn't a deciding factor; but I was often a little lost when chapters ended and we're suddenly in a completely different scene. I consider myself a pretty astute reader, and I was feeling lost! I reread parts to see if I could get a feel for that point in time, but ultimately, checking Wikipedia was what helped.

I do recommend this book, because it's a great take on Russia's history in the 1900s (during the First World War, that is). Don't read this book if you're expecting a fairy tale, or a fantasy novel, or something like that. This is literary historical fiction. It's well-written and the story is fascinating, but it isn't for everything.

3.5 stars -> rounded up to 4 stars. Liked but didn't love, and I can't recommend to everyone because literary historical fiction isn't for everyone. Heck, I read these types of books very rarely. If it hadn't been marketed as YA, in a YA catalog with a YA publisher, I might have passed it straight! My rating might seem a little low, but I didn't quite love the book as a reader. As a reviewer, this book was solid. As a reader, it was good but not a new favorite. I did enjoy it though!