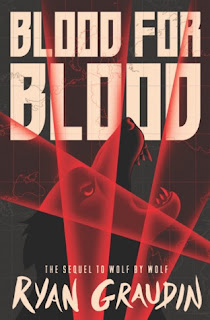 For the resistance in 1950s Germany, the war may be over, but the fight has just begun.

Death camp survivor Yael, who has the power to skinshift, is on the run: the world has just seen her shoot and kill Hitler. But the truth of what happened is far more complicated, and its consequences are deadly. Yael and her unlikely comrades dive into enemy territory to try to turn the tide against the New Order, and there is no alternative but to see their mission through to the end, whatever the cost.

But dark secrets reveal dark truths, and one question hangs over them all: how far can you go for the ones you love?

This gripping, thought-provoking sequel to Wolf by Wolf will grab readers by the throat with its cinematic writing, fast-paced action, and relentless twists.

***Potential spoilers for Wolf by Wolf (but not Blood for Blood)!***

I had a feeling that this one would be wonderful, but I also had a feeling that it would hurt. And I was right on both counts. Blood for Blood is a stunning follow-up to Wolf by Wolf, being just as intense and engaging as its predecessor. I know I'll be thinking about this series for a long time.

Blood for Blood begins exactly where Wolf by Wolf left off. Yael is running for her life, and Luka, who stepped out of the ballroom, follows her. He sees her change faces, and confronts her. She agrees to let him come with her. They are captured again... and again... but they find their way to an old friend of Yael's. Now Yael must try to do what she did at the end of Wolf by Wolf again - once and for all. Luka must make a decision on his loyalties. Felix must decide what is most important to him. No matter the choices, blood will be spilled - blood for blood.

A potential problem that I ran into was not recalling details from Wolf by Wolf. I very clearly remembered the ending, but certain names escaped. But Graudin does a really great job of bringing readers back into this alternate historical world, into the story of Yael and Luka and Felix and Hitler. In fact, there is a different element to this book - there are "before" passages, featuring a snippet of Luka, Yael, and Felix's life. Each snippet is at the same time (i.e. what Luka was doing on Christmas Day, and Yael, and Felix). These "blasts from the past" were very informative, and made me understand each character (but especially Luka more). And they helped me recall details from book one. These "before" passages only occurred three or four times in the book, so not too many, but not too few.

As with the first book, Graudin's writing is excellent. The world-building is very well-written too. You can imagine how difficult it must have been, to craft an alternate historical world, based on enough truths to make it historical, but enough fictitious elements to make it alternate.

This book is told from Yael's POV, as well as Felix's and Luka's, each in third person. Three perspectives can get busy, but the author writes each well, and she uses each perspective to keep the story moving in an effective manner. You could clearly tell that the person affecting the story the most at that point was the one whose perspective we were reading from. Each character played a significant role in this book, both positive and negative.

Yael is fearless and completely tunnel-visioned because she needs and wants to complete her mission. She might come across as empty or cold on the surface, but she is a live flame, burning with a need for vengeance. Luka wants to be more helpful, wants to be braver, wants to be better than his father. He stays with Yael and eventually believes in the resistance's cause. Felix is driven by his need to protect his family.

Yael is an incredible character, and I'm not just talking about her skin-shifting ability. But my favorite character had to be Luka. Getting further into this head and really understanding him made me like him even more. He is a selfless and good person. I love his humor and his wit, though he uses them like armor.

This book is nonstop action, from start to finish. Yael and Luka are bounced around and are constantly on the move, right until the end. They pick up allies and enemies along the way, including Felix and an old but familiar friend. If there is one thing I can say about this book, it is that you will never be bored.

There is subtle romance in this book, just like it was somewhat subtle in Wolf by Wolf. It doesn't really progress in this book, though Yael and Luka do think about each other and we can see their feelings grow a little deeper as the story goes. I would have loved to see more from the romance, but that's okay. It wasn't totally there and it wasn't a huge part of the story.

The ending was absolutely brutal! Heartbreaking, but necessary, in a way. You could kind of see it coming, with Graudin dropping tiny hints as the story progressed. That doesn't mean I have to like the ending. It's a good ending in terms of some things, but in other things, it is heartbreaking. A worthy ending, but a brutal one. Just prepare yourself!

The ending is the only reason why this book is getting four stars (as opposed to five). Everything about this book was wonderful (writing, world-building, characterization, plot), but the ending ripped me to shreds.

If you're into alternate history, or are intrigued by the mid-1900s, or are looking for fiction that makes you contemplate and take a step back, then this is for you. This isn't your average high-action YA novel - this one is more thought-provoking and gut-wrenching and noteworthy, in various ways. Don't read it if you're looking for the perfect HEA or a great ending or a passionate romance!

4 stars. This book was a great conclusion to an intense and spellbinding series. I've read all five of Graudin's books, but I think the two books in this series are my favorite. I'm excited to see what she has next for us!