Review: A Scot in the Dark by Sarah MacLean 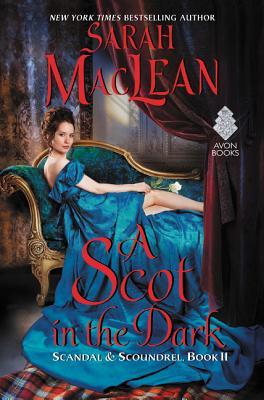 Miss Lillian Hargrove has lived much of her life alone in a gilded cage, longing for love and companionship. When an artist offers her pretty promises and begs her to pose for a scandalous portrait, Lily doesn't hesitate...until the lying libertine leaves her in disgrace. With the painting now public, Lily has no choice but to turn to the one man who might save her from ruin.

The Duke of Warnick loathes all things English, none more so than the aristocracy. It does not matter that the imposing Scotsman has inherited one of the most venerable dukedoms in Britain—he wants nothing to do with it, especially when he discovers that the unwanted title comes with a troublesome ward, one who is far too old and far too beautiful to be his problem.

Warnick arrives in London with a single goal: get the chit married and see her become someone else's problem, then return to a normal, quiet life in Scotland. It's the perfect plan, until Lily declares she'll only marry for love...and the Scot finds that there is one thing in England he likes far too much...

It's been over a month since this book published, and I'm now getting around to reading it! I've had the galley for quite some time, so this is rather irregular. When I tried to read this book several months ago, I struggled with it. I had seen some so-so reviews of the book, and I felt a bit let down. But I'm happy to say that I felt a bit differently than those reviewers! This is the second novel I've read by Sarah MacLean (the first being book one of this series, The Rogue Not Taken). So far, I've enjoyed the series!

In this novel, we have Lillian Hargrove, a ward of the Duke of Warnick, who has been an artist's muse and mistress for six months. She thought he intended to marry her, and that he loved her. She loved him, and so when he announces that a magnificent nude painting of her will be the next masterpiece, Lily is shocked. The painting will be revealed to the public in ten days, but Lily's reputation is already ruined, just as she is. The solicitor writes to the Duke of Warnick, a Scottish man who wants nothing to do with England. Alec didn't even know that he had a ward - he's the eighteenth (or something like that) Duke of Warnick, and he's not interested in being the Duke. But he comes to London to help his ward, and finds that she is just as beautiful as the rumors say. But beauty is troublesome, and Alec knows that she must marry in order to weather the scandal. But while both Alec and Lily have differing agendas, they can't seem to fight the feelings that develop.

This book was both wonderful and heartbreaking at the same time. I loved and hated the premise. Lily innocently and naively fell for an artist, an artist who only saw her as his muse. She thought he loved and her wanted to marry her, and she was totally devoted to him, in every way. My heart broke for Lily, when she realized that he was going to share the large nude painting of her. He had said that the painting was private, just for them, but then he changed his mind. Doesn't this sound familiar? Like... when a girl's nudes are leaked on the Internet, by her boyfriend or husband or someone. You trust someone with a very private part of you, with your life, and the person violates that trust.

In that sense, I love how MacLean relates a novel set in the 1800s to the current time period. Lily is the victim of a massive invasion of privacy. Yes, she sat for the painting, in the nude. But the painting was, to her knowledge, supposed to stay between her and Derek (the artist). The issue of womens' rights (or lack thereof) and sexism is very significant in this book. More than once, Lily remarks on how if a man did this or that, it wouldn't be as big a deal.

As feminist as Lily is, it was nice that she wasn't a jerk, either. Often times, romance authors will make the feminist heroine so strong and so feisty and so bull-headed... and turn the woman into a cruel jerk. Lily stood up for herself and didn't let herself get pushed around, but at the same time, she was almost always respectful and empathetic. She isn't necessarily a sweet woman, but she is  mindful of manners and she isn't cruel.

Alec... Alec is such a complex character. He is swoony and sweet, selfless and protective. He is a quiet alpha; he's known for his size (over six and a half feet tall, broad, and with a Scottish brogue to boot). Alec is a very likable hero, and I liked him a lot, issues and all. By the end of the book, I wanted to cry. He constantly puts himself down, and doesn't think he is good enough for Lily. He has developed such a rigid line of thinking in terms of his self-worth. His past defines him in terms of one aspect, an aspect that rules his personal life. He pushes and pulls away from Lily, because he doesn't think he is good enough for a lifetime. It's a good thing Lily is a keeper, because as much as Alec put himself down, Lily saw him and loved him.

In that regard, I adored the romance. Yes, there were hot and cold moments, and the beginning was a little rough for these two. But their emotional progression of feelings was evident, even if this book took place in less than two weeks. The chemistry didn't show up until about halfway through the book, but it went into the story well. I really liked seeing the pair interact once they start recognizing their feelings for each other.

One of the reasons why I liked this book so much is because of how Lily fixes her own problems at the end,  in terms of both the painting and Alec. The painting aspect was surprising, but not shocking, and I liked how she took charge of that. In terms of Alec... well, he's insecure about him being good enough for her, and he tries to dissuade her many times from loving him. But I LOVE how Lily sticks with Alec, and never gives up on him. She is always there, constantly fighting for him. It doesn't matter how many times he pushes her away, she never actually goes away. I love this. I love how she stood her ground and dug her heels in. Often times, you'll see a heroine run far away if the hero tells her he doesn't want her (because he's not good enough for her, or some other stupid reason). In this case, Lily is not buying that, and she sticks around. I love this! Fight for your man, girl.

I'm also really glad that Lily ended up comforting Alec as much as he comforted her. You'll see that this is one-sided, in romance novels. The girl is suffering and the guy comforts her - but the guy is working through issues and the girl never seems to comfort him. I liked seeing this support go both ways, between Alec and Lily.

Minor things that I liked -- there were no overbearing 1800s parents in this book. There were no parents, period, and I was fine with that. Lily is twenty-three and Alec is thirty-four, but both were orphaned at some point. Sometimes the parents in historical fiction novels can be SO annoying, so I was glad that that toxic presence wasn't in this book (on either side). Another thing I liked was the appearance of the Dangerous Daughters! Their friendship with Lily was so wonderful. It was nice to see some really positive female relationships, especially with all the cattiness of the ton at the time.

So! I loved Alec, his character development, Lily and her strength, the romance (it was cute), and the messages of this book. I am looking forward to reading the next book in the series!

I think the romance could have been stronger (and definitely sexier). It was a cute romance, and you could see the progression of feelings, but I didn't totally believe the chemistry at first. And then there was only like, two sex scenes?

While this isn't necessarily a new favorite of mine, I liked this book a lot. Initially, I couldn't get into the story because I was deterred by some reviews (and the premise of the book, if I'm being honest). But I'm glad I gave this book a chance! It's an enjoyable story with a lot of meaning behind it, and a wonderful cast of characters with a cute romance.

4 stars. I don't think MacLean is on my auto-read authors list (yet?), but after two books I can definitely see the hype surrounding her. I'll stick with this series and then branch out to some of her backlist titles eventually. I'm excited to read book three - the premise sounds intriguing! A little unconventional, but it has my attention.