Review: The Earl by Katharine Ashe 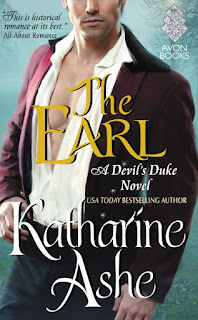 How does a lady of wit and courage bring an arrogant lord to his knees?
Entice him to Scotland, strip him of titles and riches, and make him prove what sort of man he truly is.

Handsome, wealthy, and sublimely confident, Colin Gray, the new Earl of Egremoor, has vowed to unmask the rabble-rousing pamphleteer, Lady Justice, the thorn in England’s paw. And he’ll stop at nothing.

Smart, big-hearted, and passionately dedicated to her work, Lady Justice longs to teach her nemesis a lesson in humility. But her sister is missing, and a perilous journey with her archrival into unknown territory just might turn fierce enemies into lovers.

This book, for me, was better than The Rogue. I had an easier time reading and digesting this one. When I read The Rogue, I was disappointed, and I didn't love the book. I have not read any of the Falcon Club books. This novel, focusing on Colin Gray and Emily Vale, was heartbreaking and uplifting, infuriating and undeniably romantic.

Colin Gray is the new Earl of Egremoor, after the recent passing of his father. He was the secretary of the Falcon Club, which has been disbanded. When his nemesis, Lady Justice, calls for his help, he is curious, and does not refuse. Emily Vale's sister is missing in Scotland, and she will do anything to find Amarantha. Even if that means calling on Peregrine, the secretary of the Falcon Club. But Emily realizes who Peregrine really is, and decides that she has no need for his help. But Peregrine - Colin - is determined to help Lady Justice (he doesn't know her true identity). By chance, Colin and Emily meet in an inn in Scotland, looking for the same person (though Colin does not know this). They have been avoiding each other for years, but this journey is inevitable, and completely necessary.

The first thing I want to point out is that the synopsis is not quite accurate. Emily does not lure Colin to Scotland, and he is not stripped of titles and riches. Not exactly, anyway. In Scotland, he and Emily have to flee hastily (there are highwaymen pretending to be them), and they do not have any of their belongings with them. So it's not exactly as the synopsis says - it's not like Emily strips Colin of anything. And Colin isn't actually stripped of anything. If that makes sense.

Anyway! I had a much better time reading this one, compared to The Rogue. Emily has hated (or tried to hate) Colin for about eighteen years, since she was eight and he thirteen. The reason is ridiculous, and the whole grudge she has is ridiculous, but I can sort of see why she would harden her heart against him, at age eight. Sort of. I remember being eight.

I loved Colin, infinitely more than Emily. This surprises exactly no one, because with The Rogue, I loved Saint and haaaaaated Constance. In this case, I like Emily, but I adore Colin. I was almost bawling, while reading the prologue. Colin has been hurt and broken in a number of different non-physical ways, since he was a child, and my heart hurt for this fictional character. In the story, he is somewhat emotionless and empty and hard, but utterly selfless and duty-driven. Also, he has a nibbleable jaw. I got a good visual in my head - and I must say, the cover model does him justice.

But back to the man. Gah! He's a swoony hero for sure. I think he deserved more and better, but I liked seeing him work through the past, suffer a bit (I know!), and then get rewarded for everything (in a sense). He's so honorable and so selfless. I could look past his occasional silly remark about this or that, because he's a very true male protagonist in this time period.

Emily... is equally complex but not as likable (to me). She's an independent eldest daughter, and in this time period, that is a bit odd. She writes political pamphlets under Lady Justice, and no one, save a few servants, know who she is. Emily is a bit snobby when it comes to Colin, and she's been holding a stupid grudge for eighteen years. Sometimes I questioned her judgment and her sanity, other times I was rooting for her and her brazen opinions.

Together, the two are fire and ice. There was just the right amount of push and pull between them. It wasn't just Colin chasing after Emily, or Colin constantly apologizing to Emily, or moping or begging, etc. No, Emily did her fair share of apologizing and realizing that she was being stupid and understanding that she hurt him, that he hurt, that he isn't invincible or perfect.

I got punched in the feels soooo many times during this book. The interactions and dialogue between these two characters were so well-written, and sometimes, my heart hurt for them. They hash out a lot about the past, and their anger at the other, and sometimes I wanted to just force them together and have them work things out. I do like how they worked through things as the story progressed, and not all at the end, or something concentrated like that.

So I did like the romance - it was hot and cold and sweet too. The chemistry between these two was there, and constant, smoldering in the background. Ashe's romance novels are never a smoke show, but I like how intimate they can get.

So, overall, I enjoyed this book. I'm quite happy about this, because I remember feeling incredibly sad and a bit mad at myself for not loving The Rogue. With that book, I felt like I needed to love it (perhaps my expectations were too high). With this book, I expected to dislike it (after reading various earlier reviews), but I ended up liking it.

While I didn't dislike Emily like I disliked Constance, I still didn't completely love Emily. She hurts Colin a lot, past and present, and some of it is unforgivable to me. Of course, I try and tell myself to put myself in her shoes... but some of it, she does all on her own. Some of her decisions are incredibly stupid, for someone so smart.

This book features a huge pet peeve of mine! You know when a heroine messes up and should be the one to apologize first and/or make a big grand gesture or something? Well, in this book, both of them mess up, and both of them send indirect grand gestures... but it's Colin to beg. I thought it should have been Emily. The man left the choice up to her, and then walked away. To me, that means that SHE should be making the choice... i.e., going to him. Not the other way around. Do you see why this is a pet peeve of mine? There is no logic to this! I'm glad Colin was the "bigger man" in this situation. But Lady Justice is this high-minded feminist - shouldn't she be the one to going after what she wants, like she does with the Domestic Felicity Act?

Last complaint - the ending is ambiguous, as to Colin and Emily's relationship. They're together... but to what degree. Honestly, I cannot believe that Emily would go through all of the growth and realizations about marriage and how much she loves Colin... and then not marry him? It's like the author wants to punish Colin (he has wanted to marry her for forever). Of course, the ending is ambiguous... so I suppose we'll see, in book three.

I'm split on this. On the one hand, I love how smart and feminist Ashe's historical romances are. The heroines are strong and bold, and the heroes are dashing and charming. On the other hand, this particular series by Ashe is definitely not for everyone. I like logic and rationale and fact - and sometimes, the ladies in this series forget about all of those things (which is sad because Constance and Emily are both very smart ladies). Heck, I'm going to need book three to tip the scales, for me. So, yes and no, I do and don't recommend this book. It's not your typical wonderful and sweet historical romance novel - yes, it has those aspects, but they take a far backseat compared to the significant feminist presence (for better or for worse).

3.5 stars -> rounded up to 4 stars. Not a new Ashe favorite of mine, but still good, and worthy of 4 stars. I'm a tough critic but I also like to be fair and honest. I'm still a little shaky and wary when it comes to this series, but I am looking forward to read The Duke.