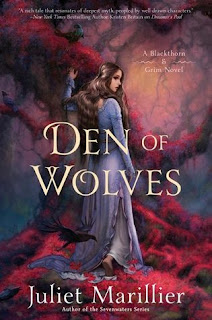 Feather bright and feather fine, None shall harm this child of mine...

Healer Blackthorn knows all too well the rules of her bond to the fey: seek no vengeance, help any who ask, do only good. But after the recent ordeal she and her companion, Grim, have suffered, she knows she cannot let go of her quest to bring justice to the man who ruined her life.

Despite her personal struggles, Blackthorn agrees to help the princess of Dalriada in taking care of a troubled young girl who has recently been brought to court, while Grim is sent to the girl’s home at Wolf Glen to aid her wealthy father with a strange task—repairing a broken-down house deep in the woods. It doesn’t take Grim long to realize that everything in Wolf Glen is not as it seems—the place is full of perilous secrets and deadly lies...

Back at Winterfalls, the evil touch of Blackthorn’s sworn enemy reopens old wounds and fuels her long-simmering passion for justice. With danger on two fronts, Blackthorn and Grim are faced with a heartbreaking choice—to stand once again by each other’s side or to fight their battles alone...

This book... this book was everything I'd hoped for, and then some. I don't know how Marillier does it! She stunned me with Dreamer's Pool, ensnared me with Tower of Thorns... and now Den of Wolves has captured my heart. Honestly this series has been so amazing. I don't read a ton of adult fantasy fiction (a lot of adult romance, yes), but I think it's safe to declare this series my favorite adult fantasy fiction series. I am utterly amazed!

In this final novel, Blackthorn and Grim are separated almost immediately. Blackthorn has new responsibilities at Winterfalls, keeping a young girl occupied and taking care of her. Cara, the young girl has been sent to court by her father, to learn social etiquette and comportment. But Blackthorn quickly sees that Cara does not belong in court, and should be back at her forested home in Wolf Glen. Meanwhile, Cara's father employs Grim to rebuild a heartwood house that was once nearly completed, in Wolf Glen. Something is very strange about the two occurrences (Cara being sent to Winterfalls, and Grim being called to Wolf Glen to build the house, with a deranged master builder). Blackthorn and Grim are forced apart, but they will need each other to understand what is happening.

Each of the books in this series is so unique and captivating in its own way. The series is a continuous series (not a companion series), yet it almost seems like you could read each one individually (though I don't recommend it). This story introduces many new characters that weren't present previously in the series, as well as many of the characters in the other two books were not in this book.

I love how subtly (and sometimes not so subtly) feminist this story is - and Blackthorn is. Blackthorn is blunt and loyal and so strong and capable, but she's also vulnerable and very human. But she is every inch the warrior that Grim sees in her, that she begins to see in herself. Blackthorn becomes selfless on her own, regardless of her agreement with Conmael.

I loved Grim's narrations as well as Blackthorn's. Grim has a distinct manner of thinking, a distinct voice. He's rough on the edges, and a rather large guy, but he is kind and pensive and he sees right through everyone. He's loyal and generous to a fault. He and Blackthorn are such a good pair because they complement each other really well. They have a strong bond, which is friendship, mostly.

There is a third and fourth narration, but those two are in third-person (whereas Blackthorn's and Grim's are in first-person). Cara has quite a story to tell, as does the wild man that is the master builder of the heartwood house (Bardan). Bardan's narratives were often confusing, but it becomes apparent as to why. Cara's narratives are not confusing but those of a frustrated fifteen-year-old.

I love how it seemed like this story was going in two different directions (Blackthorn's, and Grim's), but the two plots converge and intertwine rather neatly. Bardan is not a random master builder, and Wolf Glen is not a random holding with no secrets. It was so clever and mind-blowing and intriguing, what secrets this holding had hidden away, and Cara's father too.

I love the way the author weaves the story together, and her writing as well. Her world-building is so meticulously crafted, and her years of experience in writing novels really shows. This series is quite the masterpiece, in my opinion. There is magic in this story, and fey, and a twisted tale that dictates a lot of the history of certain characters of the story. Which was intriguing! And sad, too.

It's safe to say that there really is no "romance" in the book. Blackthorn and Grim have a deep friendship, but we can all see that it runs deeper than that. But nothing on the romance end happens... until the very end. Which I liked, because the story didn't need romance, but I liked that it was a bit of an afterthought.

You can probably tell how much I enjoyed this book! Dreamer's Pool remains my favorite, but this book definitely comes next. I loved all three books so it's hard to have a favorite. I am sad that the series is over, but I loved how it ended!

The only thing I think I'd take issue with is that this one took a little more to get into, versus the other two books. I had a bit of trouble with the first hundred pages or so. Maybe it was just me though! (I was a little tired, when starting the book.)

If you like adult fantasy fiction, then this is definitely a series to try! It was such a lovely and adventurous and spellbinding series. This conclusion really does not disappoint; there was magic, fey, spells, lore, secrets, and nonstop guessing as to what would happen next. This book (and series) was highly enjoyable, and definitely the kind that you want to savor!

4.5 stars. I'm rounding down to 4 stars. This series is so, so good. I think I may need to binge-read some of Marillier's other books! I'm glad my first experience with her books was so positive. She is quite the talented writer, and I look forward to reading more from her in the future!