Review: Fool Me Once by Katee Robert 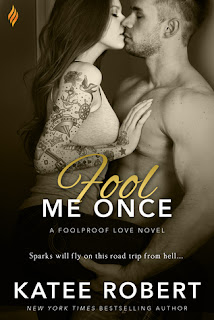 I liked Foolproof Love, but I think I liked this book even more. They're receiving the same overall rating, but this book was even better than its predecessor. I actually didn't think I would like this book as much, because I wasn't the biggest fan of Aubry in Foolproof Love (she was okay). But I liked her a lot, in this book!

Aubry doesn't like people. She's pretty much at a constant state of grump and somewhat antisocial. She has pretty crippling social anxiety, so when she gets invited to be a beta tester for a video game series that isn't going to release for another year, she hesitates, because it's during a convention with thousands of people. But her best friend Jules suggests that Aubry take Quinn Baldwyn with her. Quinn is a tall, muscular cowboy who could physically help her at the convention. And what's more, Quinn needs someone to be his date at his sister's wedding, so he won't have to deal with his rich father's matchmaking attempts. Aubry hates Quinn... or does she? Sparks fly on the road-trip to the convention, and then the wedding. But when the pair returns, will they return to their previous non-relationship?

I liked Aubry, at least more than I did in Foolproof Love! She's a grump and rude and moody and antisocial, but I totally get her. She and Quinn have great banter going on, and I love it when it turns into something else. Aubry is focused on her video game and her design work, and so she hasn't been with anyone in years. But it's not just her hormones talking when Quinn is around her - it's Quinn all by himself, who is one of a kind.

Quinn comes from a rich family, but he left that behind. He's a cowboy working on the Rodriguez ranch, and he's not trying to return to his rich-boy lifestyle, despite his parents' attempts otherwise. Quinn is wicked and charming, and he flirts with Aubry all the time. He loves making her a little irritated, and hot and bothered. But underneath all of the flirting and the barbs, Quinn is a good guy. He isn't an arrogant guy, and he isn't a runner. He's noble and very protective, especially when he becomes aware of Aubry's social anxiety and panic.

I like Robert's treatment of Aubry's conditions, and how Quinn handles her panic attacks and her anxiety with crowds. Despite them disliking each other initially, Quinn is so gentle with her. There were several "awwww" moments in this book!

But the romance is also pretty sweet. Aubry has some serious trust issues, and she really needed to work on that. I liked seeing the pair grow more comfortable around each other, even if it was only a week (that the road-trip lasted). They'd known each other for longer than that, before the trip, but the trip brought them closer, took them apart, and brought them closer again.

The conflict and climax of the book wasn't too dramatic, although Aubry was a bit of a diva. Given her personality and her issues, her reaction to something was... somewhat understandable? But not really, because she still acted like a crazy person, to an outsider that didn't know her. This "drama" was her fault and not Quinn's. In the end, they both fight for the relationship, which I liked seeing. Quinn had to initiate the things (grrrr), but Aubry was the one that apologized profusely. Good!

Overall, I liked this book a lot! It was funny and sweet and very, VERY hot. The sexy times were a little different from the usual, but I found that I really liked that. Super hot stuff here!

Nothing specifically comes to mind, but this isn't necessarily a new favorite, so it's getting four stars from me. Still very good!

I highly recommend this novel! If you enjoy Katee Robert's books, or Brazen novels in general, this is one to look up. There are many Brazen novels that I read that just aren't memorable... that is NOT this book. I will definitely remember this book in the future, and I will be rereading it for sure.

4.5 stars -> rounded down to 4 stars. I didn't think Quinn and Aubry would top Adam and Jules, but they did! I'm a little hesitant about Daniel and Hope's book (because it involves an unplanned pregnancy, and I typically avoid books with those scenarios), but I trust Robert!