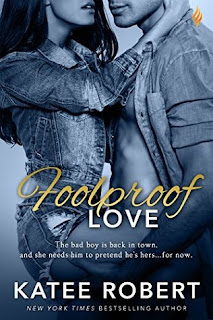 This is a new series by Katee Robert (new to us, but actually one of her first series ideas). I'm loving the idea of the series - dirty-talking cowboy for the win! - and I'm a huge fan of Katee Robert's books. So I was pretty excited about this one since I knew it existed. And I liked it! I was not disappointed, as I so rarely am, with Katee's books.

Jules' ex-boyfriend Grant is back in Devil's Falls, much to the annoyance of Jules. He dumped her nine years ago, citing that she was too boring. Years later, Grant is back and wants to cozy back up with Jules, but Jules isn't having it. She tells Grant that she's dating Adam Meyer. Adam was a wild kid back in the day, and he hasn't been in Devil's Falls for years. He's just recently come back to take care of his mother. But the famed bull-rider has not stayed in one place for very long. He agrees to be Jules' fake boyfriend, But they both know that there will be an end to this fake relationship... yet neither of them is quite willing to give up what they have.

Robert affectionately calls this series her "dirty talking-cowboy" series, which totally fits the bill here. The story is set in Texas, specifically a part of Texas, with dusty bars and cowboys and cowboy boots and bull riders and watering holes. I adored the setting of this book, and how it's so important to the story, the character, things as simple as speech/writing style.

We're first introduced to Jules, who is sweet and kind and supposedly boring, as dubbed by her ex-boyfriend. Jules has been in Devil's Falls all her life, and wants to stay there. She owns a cat cafe, in which you can buy your coffee or donuts or whatever, and cuddle with or pet a cat (there are seven roaming around the cafe). Neat idea, even if you don't like cats! I don't, by the way.

Anyway, so Grant is back in town (he's the ex), and he asks Jules on a date. Rude! So Jules tells Grant that she's dating... none other than Adam! Jules does not still carry a torch for Grant, but she wants him to know that she is not boring or a spinster. Best way to shake up rumors? Tell people you're dating the legendary Adam Meyer, bad boy and bull rider.

Adam is back in town to take care of his mother, who has cancer. No one knows about the cancer (they know that his mother is sick, but not the extent of the sickness). Adam is known for what he was when he was younger - wild, a little unpredictable, restless. He has a bit of a low opinion of himself, especially since he wasn't in Devil's Falls when his mother got sick. He blames himself for not being there, not seeing the sickness progress. Adam is a good guy, with a huge sense of honor. He's one of those alpha males that comes across as charming and wicked and a little arrogant, but he has a hard time opening up to people, and he probably needs lots of hugs.

I like the fake-to-real relationship kind of romances! I also liked that Jules wasn't trying to get back at Grant, or get over Grant, or make Adam her rebound. She and Grant hadn't been together in nine years - what Jules wanted was for Grant (and the whole small town) to see a little scandal from her, see that she's not just boring Jules Rodriguez.

As with all of Robert's books, this book is pretty hot. I wouldn't say as steamy as her usual level of steamy, but still pretty scorching and 100% Entangled Brazen. And there is a generous dose of good backstory and a little bit of angst, but the book is low on drama.

Overall, I liked this book! Definitely worth the wait, and the read. I will be catching at least book two (not sure about book three - I don't really like babies/pregnancies in romance novels). I love Aubry and Quinn, and can't wait to read their story!

This book is way too short. Brazen novels typically aren't long, but this one doesn't even hit two hundred pages. I feel like the character growth could have been a smidgen more developed, and Adam and Jules' relationship definitely could have been more developed as well. And of course, I'm a glutton when it comes to romance novels - I want more anyway! More heat, too. This book isn't quite as hot as Robert's previous books have been. But that's okay!

If you like Katee Robert's books, I would definitely recommend this one, her latest book. And if you like Entangled Brazen novels, same deal. As a romance novel in general, I think it's a little too short, and there are better, longer, and steamier romance novels out there. But this one was very satisfying and sweet, I liked it!

4 stars. Katee Robert in one of a few go-to romance authors that I adore! I'm always looking out for more steamy reads by her. Next from her is from her O'Malley's series, An Indecent Proposal, which I am dying to read it!