Review: Once Upon a Moonlit Night by Elizabeth Hoyt 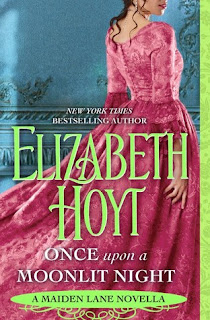 From New York Times bestselling author Elizabeth Hoyt comes a delightful Maiden Lane novella that begins once upon a moonlit night—and ends wickedly, wonderfully ever after...

Hippolyta Royle is running for her life. Pursued by hounds on a cold rainy night, the heiress flags down a passing carriage and throws herself at the mercy of the coach's occupant. Whoever this handsome traveler may be, he is her only hope to escape a terrible fate. But should he agree to escort her to safety, he's in for much more than he bargained for.

At first Matthew Mortimer doesn't believe Hippolyta's story, that she's a fabulously wealthy heiress who's been kidnapped. He assumes she's a beggar, an actress, or worse. But once his new travel companion washes the mud from her surprisingly lovely face, and they share a breathtaking kiss, there is no turning back.

Oh how this book was fun, sweet, steamy, and heartwarming! The Maiden Lane series is one of my favorite historical romance series (if not my favorite). I was beyond excited to see that Hoyt would be publishing a novella - especially when it was revealed that Hippolyta Royle would be the protagonist. I LOVE how Hoyt places Hippolyta's story.

You don't have to have read the previous books in the series to understand and enjoy this novella, but I recommend you read at least Duke of Sin (heck, the whole series, but Duke of Sin for sure). I mention book ten specifically because Once Upon a Moonlit Night starts exactly as a scene from Duke of Sin ends - with Hippolyta running from Ainsdale Castle, after Bridget rescues her and sends her away with a little money.

Hippolyta has been running from the hounds that are chasing her, courtesy of the duke who kidnapped her. She runs into the road and stops a carriage, owned by Matthew Mortimer. Matthew doesn't believe her when she says that she is Hippolyta Royle, the richest heiress in London, but he lets her in the carriage anyway. Matthew has just returned from traveling around the world; his cousins have passed away, and he has been left the earldom. But he doesn't tell Hippolyta all of that. No, he plans on dumping her off at the nearest posting in, and going about his business. But whether or not he thinks she is a beggar, he can't help but feel a little protective over her... and attracted to her. And Hippolyta can't help but feel safe with Matthew, and more than grateful. But what will happen when Matthew finds out that Hippolyta wasn't lying about who she was?

Ahhh, this novella was lovely. Usually I avoid novellas like the plague, but I love Elizabeth Hoyt and the Maiden Lane series, and there was no way I was missing Hippolyta's story. And it turned out to be so fun and so sweet!

Hippolyta is kind and a little innocent, but also a little regal. From the start, Matthew doesn't quite think she's a beggar, but he doesn't believe her when she says she's Hippolyta Royle. She is inquisitive and intelligent, and much more than a rich, pretty girl.

Matthew! He used to be Mr. Mortimer, a young cartographer. Now he is going to London to take on an earldom, and become the Earl of Paxton. Matthew is a little gruff, and he doesn't like Hippolyta at all, at first. In fact, he doesn't want anything to do with her. But something won't let him let her go.

The romance between these two is so fiery! It's a good hate-to-love romance, which I love. At first, Hippolyta is a little haughty yet desperate, and Matthew is irritated and in disbelief (but he doesn't ignore her pleas for help). It was so cute to see them go from absolute irritation and annoyance with each other, to passion and love. While this is only a novella, time does pass, enough for me to *believe* their relationship.

Half the story is spent on the road, with Matthew helping Hippolyta get to some posting in, and then Hippolyta's father finding her starts the second half. What ensues is a little bit of chaos! But I love how things worked out. Matthew and Hippolyta are such a sweet pair, passionate and caring and protective of each other.

Yes, there were some steamy scenes in this book. It's a novella, but there were at least two (maybe three?). Hoyt never skimps on those, which I love! *fans self*

Overall, this novella is totally worth the read. Hippolyta and Matthew are unlike any other couple in the Maiden Lane series - though you could say that each couple in the series is wholly unique (which is totally true!). I'm glad Hoyt decided to write about Hippolyta specifically!

Obviously I wanted MORE! I mean this in the best of ways.

I highly recommend this novella, if you're a Hoyt fan, and/or fan of the Maiden Lane series. Historical romance fans should definitely give this series a chance! My personal favorite is Duke of Midnight, with Duke of Sin slightly behind. Only slightly!

4.5 stars. I'm rounding down to 4 stars because you all know me and my pickiness about the 5-star rating. I am such a huge fan of this novella, and this series in general!