Welcome to the blog tour for A Week of Mondays by Jessica Brody! Today is the seventh Monday before the publication of this book. I've read A Week of Mondays and I guarantee that this is not one to miss. Here is a SWOON from the book, to further convince you!

ELLISON “ELLIE” SPARKS: An idealistic, ambitious sixteen-year-old junior with a lot on her plate.

Those were the first words I ever wrote about Ellie Sparks. They were written in a synopsis for my publisher when I was first trying to sell them on the idea for a book called A WEEK OF MONDAYS.

Of course, you can’t write an entire book about a one-sentence character. Just like you can’t live your entire life as a one-sentence person. But every character has to begin somewhere. And this is where Ellie began for me.

As an idealistic, ambitious sixteen-year-old junior with a lot on her plate.

In my mind, this is who she had to be. I thought, if you’re going to write about a girl who relives the same horrible Monday over and over again, trying to “get it right,” these are the adjectives that must describe her. She has to be idealistic enough to think she can fix everything in her life. Yet, she also has to be ambitious enough to try it. And how else are you going to fill seven Mondays with interesting storylines if the main character doesn’t have a lot on her plate.

So there was Ellie. And there was me, ready to write her, thinking I understood her. Thinking I knew everything I needed to know about her.

This is the writing process for me. I start with an idea of who someone is. I draw a box around them, like an identity fence. I stuff them inside and I lock the gate. I tell them, “This is who you are. Don’t try to change that. Don’t try to be or do anything else. I don’t have time for detours. I’m on a deadline.”

A WEEK OF MONDAYS is my tenth published novel and I’m still trying to lock characters inside fences. Eventually, though, they always break free. They always get bigger than their boxes. And even though I try to adjust, I keep drawing bigger and bigger boxes around them, trying to contain them to the world I built, the world I envisioned, they never quite want to stay inside. Just like people. You can try to identify them, label them, build a fence around them that makes you feel safe, and yet they’ll always surprise you. Because no character—no human being—fits inside a box.

One of my favorite reviews of A WEEK OF MONDAYS says, “Watching Ellie relive her horrible day is something like peeling an onion. Each Monday, a piece of her people-pleaser facade melts away, revealing more of her real self.”

I smiled when I read that because it wasn’t until then that I realized exactly what had happened in the writing of this book. I had done it again. I had tried to put yet another character in a box, and she had slowly, word by word, page by page, Monday by Monday broken free.

This book is ultimately a story of self-discovery.

Because sometimes it takes a whole week of Mondays to figure out who you really are. And when you finally do, you may find yourself thinking 'Thank God It's Monday' after all.

For the next five Mondays, blogger friends across the internet will be sharing their best and worst Monday. Follow along with us online with #TGIM and #AWeekofMondays, because whether a Monday is memorable for good reasons or memorable for bad reasons, we stand to learn a lot about ourselves. 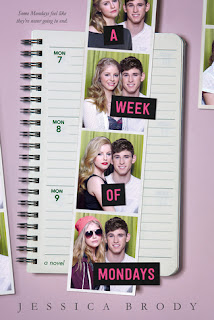 When I made the wish, I just wanted a do-over. Another chance to make things right. I never, in a million years, thought it might actually come true...

Sixteen-year-old Ellison Sparks is having a serious case of the Mondays. She gets a ticket for running a red light, she manages to take the world’s worst school picture, she bombs softball try-outs and her class election speech (note to self: never trust a cheerleader when she swears there are no nuts in her bake-sale banana bread), and to top it all off, Tristan, her gorgeous rocker boyfriend suddenly dumps her. For no good reason!

As far as Mondays go, it doesn’t get much worse than this. And Ellie is positive that if she could just do it all over again, she would get it right. So when she wakes up the next morning to find she’s reliving the exact same day, she knows what she has to do: stop her boyfriend from breaking up with her. But it seems no matter how many do-overs she gets or how hard Ellie tries to repair her relationship, Tristan always seems bent set on ending it. Will Ellie ever figure out how to fix this broken day? Or will she be stuck in this nightmare of a Monday forever?

From the author 52 Reasons to Hate My Father and The Unremembered trilogy comes a hilarious and heartwarming story about second (and third and fourth and fifth) chances. Because sometimes it takes a whole week of Mondays to figure out what you really want. 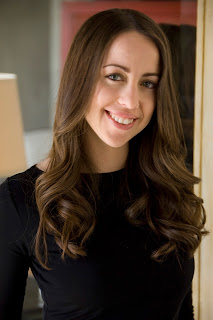 Jessica Brody is the author of several popular books for teens, including the Unremembered trilogy, 52 Reasons to Hate My Father, and The Karma Club, as well as two adult novels. She splits her time between California and Colorado. Find out more at jessicabrody.com.

A terrible Monday experience from my past: I used to have piano lessons on Monday, about a half hour after school ended (this was back in middle and high school). There were a few times when I went to the lesson completely unprepared, not having practiced all week. And it showed! SO embarrassing. And it happened on several Mondays over the years (though not too many - usually I was a diligent student). :D

So, readers! Tell me about your worst Monday experience. :)
Posted by Alyssa at 12:00 AM