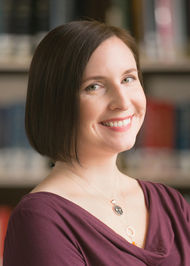 Author Most Likely to Smile Suspiciously

Alyssa: Hi, Audrey! Thank you so much for joining me today on my blog. And an early congratulations on your upcoming debut!

Audrey: Thank you! The support and enthusiasm of the blogging community has been astonishing. I’m excited to be here to talk a little bit about Of Fire and Stars and am very grateful to both you and Rachel for the opportunity.

Alyssa: My first question - what was the inspiration(s) behind Of Fire and Stars?

Audrey: My inspiration for Of Fire and Stars came from writing the book I had always wanted to read. I was a big fantasy reader as a teen, but never came across a fantasy book with a female protagonist who fell in love with another girl. So I wrote a story in which that happens, and threw in some of my other favorite things, like horses, music, forbidden magic, and the occasional assassination.

Audrey: Funny you should ask, because no, that wasn’t the case at all. The book has had several titles along my journey to publication, but the original working title was Gay Princess Pony Palooza. Some of my friends still refer to the book by that name. :)

Alyssa: To what audience do you recommend Of Fire and Stars - YA fantasy fans, YA romance fans, etc.?

Audrey: Of Fire and Stars should appeal to anyone interested in a slow burning friends-to-more love story with a traditional secondary-world fantasy setting. Politics, magic, and religion are all closely tied in the book, and because much of the plot hinges on court intrigue it reads almost as much like historical as fantasy. The kingdom of Mynaria is known for its warhorses, so people who love horses will also find a lot to like in the book—many aspects of Mynarian life are centered around horses.

Alyssa: What's another YA book that you think readers would like, if they're interested in Of Fire and Stars (and/or vice versa)?

Audrey: What a fun question! For readers interested in stories featuring other LGBTQIA+ identities, I highly recommend checking out the website lbgtqreads.com. It’s a great resource to find books with protagonists that represent all the colors of the LGBTQIA+ rainbow across lots of genres. Because Of Fire and Stars has the feel of a historical fantasy, I’d recommend readers who enjoyed it check out A Shadow Bright and Burning (September 2016), which is like Harry Potter set in Victorian London with monsters. A historical fantasy book I haven’t read yet but am very excited for is Timekeeper by Tara Sim, which has a m/m relationship. For other secondary world fantasies that also have a somewhat historical feel, I recommend An Ember in the Ashes by Sabaa Tahir or Rebel of the Sands by Alwyn Hamilton. Those are just a few of my recent favorites.

Alyssa: Can you share anything from the book? A teaser, a line, a tiny spoiler? ;D

Audrey: Both of the protagonists in Of Fire and Stars are very passionate—Denna about her duty to the crown and Mare about avoiding hers. Early in the book when Denna says she hopes one day love will grow between her and the prince, Mare has this to say in reply:

Alyssa: Very cool! Thanks for joining me, Audrey. :)

Audrey: Thank you so much for hosting me today!

Audrey Coulthurst writes YA books that tend to involve magic, horses, and kissing the wrong people. Her debut novel, Of Fire and Stars, will be published on November 22, 2016 by Balzer+Bray/HarperCollins. When she’s not dreaming up new stories, she can usually be found painting, singing, or on the back of a horse.

Audrey has a Master’s in Writing from Portland State University, is a member of SCBWI, and studied with Malinda Lo as a 2013 Lambda Literary Foundation Fellow. She lives in Santa Monica, California.

Betrothed since childhood to the prince of Mynaria, Princess Dennaleia has always known what her future holds. Her marriage will seal the alliance between Mynaria and her homeland, protecting her people from other hostile lands. But Denna has a secret. She possesses an Affinity for fire—a dangerous gift for the future queen of a kingdom where magic is forbidden.

Now, Denna must learn the ways of her new home while trying to hide her growing magic. To make matters worse, she must learn to ride Mynaria’s formidable warhorses before her coronation—and her teacher is the person who intimidates her most, the prickly and unconventional Princess Amaranthine (called Mare), sister of her betrothed.

When a shocking assassination leaves the kingdom reeling, Mare and Denna reluctantly join forces to search for the culprit. As the two work together, each discovers there’s more to the other than she thought. Mare is surprised by Denna’s intelligence and bravery, while Denna is drawn to Mare’s independent streak. Soon their friendship is threatening to blossom into something more.

But with dangerous conflict brewing that makes the alliance more important than ever, acting on their feelings could be deadly. Forced to choose between their duty and their hearts, Mare and Denna must find a way to save their kingdoms—and each other.

Win a signed copy of Rebel of the Sands, and Of Fire and Stars swag! This giveaway is hosted by the author, and it's USA only (sorry, non-USA peeps!).