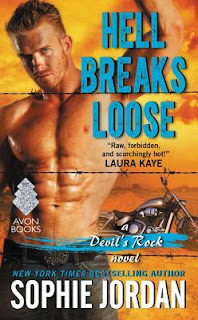 Shy and awkward, First Daughter Grace Reeves has always done what she’s told. Tired of taking orders, she escapes her security detail for a rare moment of peace. Except her worst nightmare comes to life when a ruthless gang of criminals abducts her. Her only choice is to place her trust in Reid Allister, an escaped convict whose piercing gaze awakens something deep inside her. Reid is nothing like her other captors.

He’s tougher, smarter…and one blistering look from him makes her hotter than any man ever has.

Reid spent years plotting escape and revenge . . .years without a woman in his bed. For this hardened felon, Grace Reeves isn’t just out of his league—she’s from another planet, but that doesn’t stop him from wanting her. Escaping Devil’s Rock was tough, but resisting this woman could be the end of him. For a man with nothing to lose, protecting her . . . claiming her as his own, becomes more necessary than his next breath.

SO much love for this series. I adored All Chained Up and didn't think I would love Hell Breaks Loose as much. Knox and Reid are totally my type of romance hero - strong, silent, intense, brooding, overprotective alpha. Never mind that they are convicts in the Devil's Rock prison. Both are good men. This book is Reid's story, in which he breaks out of the prison and finds his younger brother, who just kidnapped the First Daughter of the United States.

Reid Allister started a fight in the prison, and he was transferred to a hospital. There is where he escapes. The fight at the end of All Chained Up was pure masterminded genius, though rather bloody and violent. Reid goes to where he knows his younger brother Zane will be - and finds Zane and his crew high on something lethal, and with the First Daughter, Grace Reeves. Grace is bound and gagged but unhurt - so far. Reid didn't break out of prison to become a part of his brother's crazy plan. or to rescue a defenseless innocent girl. He broke out to deliver some much-needed revenge to Otis Sullivan. But Reid isn't going to leave Grace, especially since Zane kidnapped Grace to deliver her to the one and only Otis Sullivan, who wants to hurt the President. Grace must trust Reid with her life, but she quickly realizes that it isn't fear she feels when she is with him.

At first, as I was reading this book, I thought that this was going in the direction of Stockholm Syndrome. Grace was kidnapped by Zane and crew, but Reid turns up not long after Grace is kidnapped (maybe a day later). He takes one look at her, and tells the men that she is his, and that he is the only one that will touch her. He does this to protect her; he won't allow anyone to touch her, not even himself. Except that pretending to have been with her has its price - he can't stop thinking about touching her. And she can't stop thinking about him touching her.

So the Stockholm Syndrome thoughts didn't last long. It was good to see that Grace considered that as well - why else would she be starting to care about an escaped criminal who is protecting her but not letting her go? And Reid - it kills him, to know that he wants her but can't do anything about it, because he refuses to take advantage of her in any way, even if she wants it as well. It felt wrong of him to touch her or even consider touching her, because she's so good and he is so not good.

Ahh, Reid. I found him mysterious and a little dark in All Chained Up. In this book, we see a lot behind the shrouds of mystery. His past, his terrible home life, how he tried to shield his younger brother. What really happened that had him end up in prison. Reid is a good man. He is all those things I listed above - silent, brooding, overprotective, totally alpha, etc. He's also a little intimidating, and while Grace feels safe with him, she didn't at first.

Grace is the awkward, not-so-graceful First Daughter of the United States. She's the President's only child, and she's given up so much for her father and his campaigning, for both election and reelection. One night, she sneaks out of her hotel, ditching her Secret Service bodyguards. Of course, it WOULD be the same night that some thugs are watching her hotel, waiting to kidnap her. So she is kidnapped. Grace is a little fragile, a little naive, a lot pampered, but you really feel for her in this book. Her parents don't love her, she's surrounded 24/7, and she's a terrible public speaker/civil servant. She isn't good in the spotlight. Grace is sweet and innocent and selfless, and sneaking out of the hotel is the first adventurous thing she's done in... forever. Too bad it backfired.

As weird as the plot of this romance sounds, I loved the romance. I loved seeing Reid and Grace get comfortable with each other. Literally the first 50% of this book is spent with Grace in fear of Zane and the crew and her getting killed or raped. Grace is very attracted to Reid, and vice versa, but neither of them act on this odd sexual attraction. Grace wants to be free and Reid wants to kill Sullivan, but Reid won't leave Grace at the mercy of his brother. I liked seeing Grace slowly trust Reid, and Reid slowly trust Grace. Like I said, the romance might seem strange, and it's definitely not a conventional romance, but it's so well-written and wonderful to read.

Not to mention steamy. Whew! Even with more than half the book passing without any sexy times, this book was hot. There were so many "almost" scenes, so many scenes filled with sexual tension, in the first half of the book. And the second half too, though there were actual steamy scenes in the second half.

This is only the third book I've read featuring a criminal and ex-con as the male protagonist, and I must say, I love how Jordan portrays her men. She doesn't sugarcoat - none of these men are innocent angels. All of them are hardened and burdened, and Jordan does not shy away from writing what makes them hardened and burdened.

I think we could have had a little more scenes with Grace and Reid AFTER they have sex for the first time? Both steamy scenes and emotionally intimate scenes. It seemed like they had sex one or twice and then the climax of the book happened (hehe) and then the book ended. Of course, this could just be insatiable Alyssa's weird requests.

I highly recommend this book (and series), especially if you like adult contemporary romance novels. I like the archetypes Jordan is using in these books - alpha alpha male, sweet and innocent female who is tough and strong too. Not every woman is fierce and snarky, and I like seeing females like Grace and Briar (from All Chained Up) take center stage. If you like hot steamy romance novels with depth and some past tragedy and some good relationship development, try this series!

4 stars. I am EAGERLY awaiting Fury on Fire! As of today (June 6, 2016) it hasn't been officially announced, in terms of who the protagonists will be. I'm hoping the book will feature North!