Review: Beauty and the Highland Beast by Lecia Cornwall 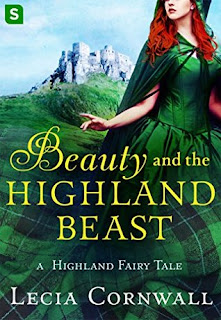 Powerful and dangerous highlander Dair Sinclair was once the favored son of his clan, The Sinclairs of Carraig Brigh. With Dair at the helm, Sinclair ships circled the globe bringing home incredible fortune. Until one deadly mission when Daire is captured, tortured and is unable to save his young cousin. He returns home breaking under the weight of his guilt and becomes known as the Madman of Carraig Brigh.

When a pagan healer predicts that only a virgin bride can heal his son’s body and mind, Daire’s father sets off to find the perfect wife for his son. At the castle of the fearsome McLeods, he meets lovely and kind Fia MacLeod.

Although Daire does his best to frighten Fia, she sees the man underneath the damage and uses her charm and special gifts to heal his mind and heart. Will Daire let Fia love him or is he cursed with madness forever?

I downloaded this book on a whim (thank you, SMP!), because I love fairy tale retellings, and I love adult romance novels. This one was good but not great. The writing didn't really work for me, I didn't really love or connect with any of the characters, and I just wasn't feeling the story in general. It wasn't for me, but I am happy that I gave it a shot!

Dair (short of Alasdair) is the heir of the Sinclair clan, one of the most powerful clans in Scotland. Dair was a a sailor, circling the globe with ease and skill, before a terrible tragedy struck the family. A mission went wrong, and Dair was captured. His cousin, Jeannie, was tortured and raped and hung while he was chained. Dair was released, as a message to the Sinclairs. Ever since he was sent back, Dair has been having nightmares and has been screaming like a madman. No one wants to go near him. But an old healer declares that a virgin can save Dair, and Dair's father (the chief of the Sinclair clan) finds Fia McLeod, one of the numerous daughters of the fierce McLead chief. Fia and her sister Meggie arrive at Carraig Brigh, and Fia realizes that Dair isn't mad; he seems sane to her. But there is something else afoot, and Dair and Fia must find out before it is too late for Dair.

More on this below, but I didn't really connect with, or love, any of the characters. I felt so bad for Dair - he is mistreated and misjudged, dubbed as a madman when I'm pretty sure he is suffering from some serious PTSD. Dair is scarred (physically and emotionally), and reacts badly when Fia arrives at the castle. But he warms up to her, and vice versa. Dair is a good man, and there are hints of alpha male that jump out every now and then. A lot of attention was spent on making Dair seem mad, which detracted from him being a lusty romance hero.

I didn't really like Fia, to be honest. She's supposed to be this innocent, sweet girl - think Snow White and the Seven Dwarves. Animals LOVE Fia, and all the men ogle her and stare at her breasts. She's supposed to be very beautiful, but noticeably scarred and she has a limp, about which she is very secretive. Fia seemed too naive to me, but she was an okay character.

The author revealed information slowly, about Dair's cousin and the tragedy, about Fia's own tragedy in her past, about the villain of the story and his motives. This was well done.

While this book isn't off-the-charts steamy, there is some pretty heavy chemistry between Dair and Fia. I liked them together; they fit well, and they each need each other more than they realize.

I didn't really care for the ending (some of the reveals were silly and didn't feel right with the story), but I'm amused by one aspect of the ending, and I'm really glad the book wrapped up as nicely as it did. The author ended the book lightheartedly and with hope, which I liked.

Somehow I just didn't connect with the characters. I'm not sure if it's just me, so if you read this book and had a wonderful reaction to it, I'm glad! Somehow it seemed like everything of this book was written on a surface layer, and didn't dig deeper. The characters seemed one-dimensional, almost like archetypes or caricatures that needed to be brought to life. Yes, we got in Dair's head. Yes, we got in Fia's head. But somehow, they never seemed like real people to me.

And it's not that I didn't like either of them - I think I like them, for the most part. I definitely like and feel so bad for Dair. Fia, eh. But I didn't really NOT like either character. I just didn't connect with them, like I find myself doing in other romance novels.

I'm not sure if I liked Fia or not. She's incredibly naive, and it seems like every male is after her. Every male is staring at her breasts ALL THE TIME - it got annoying really quickly, especially when it wasn't Dair doing the looking. I get that she's supposed to be beautiful but...

I found the writing to be a little poor, definitely not to me taste. A lot of telling and now showing, and a lot of cliche-sounding phrases. Not even in historical romance novels will you find a female protagonist saying "Take me!" to the hero. That's so cliche and definitely a '70s line in romance novels. I could not believe it when I saw that line in this book!

Towards the end, the story started to get a little obnoxious. Some of the explanations for why Dair became as he did were stupid (and they had nothing to do with Dair). I don't want to say that these explanations felt like a cop-out or a rushed ending, but they didn't feel well thought-out, or well-written, in my opinion.

I guess the story was a little boring, too. I wasn't hooked, and I wasn't really dying to know what would happen next. It took me two days to read this book (that's a lot - usually I'll sit down and read a book in one sitting).

On the one hand, all of the issues I mentioned are subjective and could be limited to me. On the other hand, this isn't necessarily a book I would recommend. Your life won't be too different if you read it, or if you don't read it. It was worth a try, and I'm glad I read it! But it's really not worth the extra effort, if you were on the fence about reading it.

3.5 stars -> rounded down to 3 stars. This was an impulse download! I do that rarely, which is fine. I don't regret pulling this one from NetGalley, but I wish I had liked it more. I was expecting a little more! Maybe the fairy tale retelling allure was most of why I was excited about this book.