Review: The Debutante is Mine by Vivienne Lorret 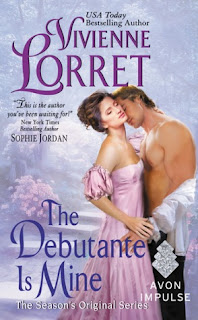 The Debutante is Mine by Vivienne Lorret
Book One of the Season's Original series
Publisher: Avon Impulse
Publication Date: April 12, 2016
Rating: 4 stars
Source: Copy sent by the publisher

From the Season Standard: “A true Season’s Original embodies the class, grace, and style of the ton. Such an honor ensures the recipient her pick of eligible suitors…”

Lilah Appleton’s prospects are looking dim. With one last chance to find a titled husband before she’s forced to wed her wretched cousin, she must make this Season count. Plain, forgettable Lilah must become the Season’s Original. Desperate, she seeks help from the devilishly charming, untitled, and thoroughly unsuitable Jack Marlowe. All she must do now is resist the tempting rogue…

Bastard son and self-made man, Jack Marlowe loathes the aristocracy. When he meets Lilah, he expects her to be like all the other greedy husband-hunters. But she’s far more dangerous. Her alluring smiles and sharp tongue intrigue him. Before he knows it, he agrees to help her find a husband, revealing tricks to ensnare any man. The only problem is, his plan works too well—on him.

When Lilah becomes the belle of the ball, Jack realizes he may lose her forever—unless he can take a chance on love and claim his debutante...

I received a copy of this book via the Avon Addicts program, sponsored by the publisher! In no way did this affect my opinion of the book.

I've not read a book by Lorret! I've seen her historical romance novels around, and some very positive reviews for her books. I knew that eventually, being the HR lover that I am, I would read one of her books. This one was an excellent start! I adored this sweet, enjoyable novel.

At twenty-three, Lilah Appleton is at her third and most likely final Season. At the end of this Season, if she doesn't land a rich, titled husband, she'll be forced to marry her cousin, in order to keep the family estate/lands/money within the family... as decreed by her controlling, verbally abusive father (who is dead before the beginning of this book). When Lilah meets Jack Marlowe, she knows better than to engage with the likes of him. His reputation is quite known - he likes women, and he makes a lot of money. He's the bastard son of an already rich duke, but he wants nothing to do with his father. What better way to learn how to charm noblemen than to enlist the help of a notorious rake who is estranged from the ton?

Ahhhh! Did I mention that this book was cute? It was! Sweet, cute, adorable, with touches of angst and "real" issues that gave the story and characters depth, but weren't overwhelming. I LOVE that this book is over one hundred pages shorter than your average HR novel. If you're looking for a sweet and steamy HR novel that won't take forever to read, here is one!

On the note of this novel being short - the length of the story did not hinder the development of the story or the characters or the conflict! Lorret does a marvelous job of telling the story and keeping the pacing steady and yet engaging. We know that time passes in this book, even if the book does not have scenes for each day in the hero and heroine's life since meeting. Days and weeks pass in this book, so no need to worry about rushed development!

Lilah is such an adorable protagonist! She is so determined to find a titled gentleman this Season - and with good reason. She has her hopes set on Lord Ellery, who lives close to where her family's estate is (Lilah is currently living with an aunt). But sadly, literally everyone (man or woman) seems to forget Lilah exists, or that they were introduced to Lilah in the past, or that Lilah is in the room too. She thinks of herself as plan and unforgettable. But she has a lot of self-esteem and confidence, and she has a fiery tongue when she isn't stuffing herself behind society rules. I adore her!

But Jack - Jack is easily my favorite character of the book. Oh Jack! He's the only son of a very important and rich duke (who's name and title I've forgotten), and he's the duke's bastard son. The duke married and had eight daughters, all much younger than Jack, and none of which can inherit. For the first ten years of his life, Jack had a very difficult life. His father wouldn't marry his mistress (Jack's mother), so the mistress had to raise her son on her own, until Jack was ten, and she sent him to his father, so that the duke would send Jack to school. And off to Eton Jack went. Jack has held bitterness toward his father for years, even though the duke and duchess want nothing more than for Jack to "come home" and accept his place with them, as heir, and son.

I don't blame Jack! His childhood was rough, and when he left for Eton, he felt terrible for leaving his mother (and he was only ten!). Jack is a charming, wickedly charming young man, and Lilah sees him as a warrior. He is a large guy, and he's a self-made man. He's a curiosity in polite society (as a bastard son), and so he avoids society. Until Lilah, who intrigues him. Suddenly, you can find Jack at all the social events! Which makes for HILARIOUS scenes, trust me.

I love how lighthearted this story is, so funny and cute! Lilah and Jack have a hate-to-love relationship (well, at least on Lilah's side). I liked seeing them dance around each other (so to speak)!

I mentioned Jack's issues with his father - honestly, I loved this "angst" in the story. It's really not that angsty, but I loved it. There were two scenes with Jack and his father that BROKE my heart in pieces - poor Jack! Poor duke! I love how Lorret wrote those scenes. I wanted to give everyone a hug!

You see why I loved Jack, right? He's such a charming alpha, but he has daddy issues. I don't know why that package is so appealing to me, but it is!

The romance is sweet! There is chemistry between Jack and Lilah. Unfortunately there is only one sex scene (booo), but given the length of this novel (less than three hundred pages), that is to be expected, I suppose. Still, there were some subtly steamy scenes in this book! Not many though.

Overall, I really liked this novel. I picked it up on a whim and I regret nothing!

Obviously I'm going to mention the lack of sex scenes! Of course I am. It's weird because I liked how this book was shorter than your average HR novel, but I definitely wanted more sexy times!

A note that is more to the publisher than author - the print of this paperback was SO small. Like, even smaller than the text size of your average HR novel. I have great vision but I was totally squinting!

I highly recommend this novel, if you're in the mood for HR but don't have the time for one of those four hundred page bad boys! Length of book almost never bothers me; however, I appreciated the fact that this book was short! It was adorable. And the ebook is very cheap!

4 stars. My first venture into Lorret books was a success! I definitely want to continue the series. I believe Wolford (who's name is LIAM!) is next, and then Max/Juliet! I am super SUPER excited for Max/Juliet's book. So many secrets between those two. Need!