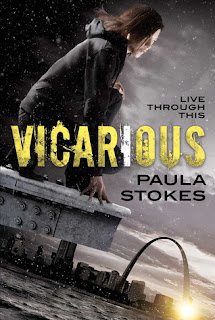 What a twisted, mind-blowing novel! Part sci-fi, part thriller, this book was exceptional from start to finish. There were so many layers to the story, and to the protagonist, and I couldn't stop reading. I can't really pick out a "favorite" Stokes book, but this one is in my top two!

Winter and her older sister Rose have escaped the orphanage in South Korea, and human trafficking in L.A. Three years after Gideon took her and her sister away from the trafficking, Winter has adjusted well to her life. She suffers from PTSD, but she's better. Gideon has created technology to capture neural impulses, which enables the ViSE (Vicarious Sensory Experiences) user to experience the physical feelings of something, like bungee jumping, or kissing another person. Winter has been doing stunts like jumping off bridges, and running from the police. Rose does something a little different... and one night, she doesn't return home. A ViSE is found in their home, and it's of Rose dying. Winter is determined to find the killer, but the clues are strange. Something isn't adding up, and Winter isn't sure what is real and what is not.

I'm going to be honest - I wasn't sure I wanted to read this one. I've seen the author talk about the conditions that Winter struggles with in this book, such as PTSD, and more. I don't usually like to read books with "tough issues". Books dealing with addiction, rape, prostitution, and so on... I prefer not to read (it's too real, and I'm all about the not-so-real escapism!). But I've read Stokes' other six books, so I figured why not keep going (especially when the publisher drops a galley in your lap. Thank you, Tor!). I'd also like to thank my friend Pili, as this is my June '16 Pili-Pushed choice!

Let's start with Winter. On the outside, she seems like an intense, somewhat cold/distant Korean girl. On the inside, she doesn't like to be touched, and she represses a lot of bad memories from her past. She and her sister have had terrible pasts, going from an orphanage to human trafficking, used as sex slaves. Winter is living with PTSD, and she blacks out and sleep-walks and represses memories subconsciously, but she's been doing really well recently. She lives with her sister, and Gideon (her sister's ex-boyfriend, like a brother to Winter). Jesse Ramirez works for Gideon, and he's Winter's friend. He and Winter record stunts for Gideon.

My heart broke for Winter over and over. At one point, I honestly wanted to stop reading. This really isn't the type of book I personally like to read, especially since Winter's conditions were brought so heavily to the forefront of the book. BUT. It's incredible how well-written everything about Winter's condition and life is, how PTSD affects her in every aspect of living. It blew me away and broke my heart, and I have got to tip my hat to Stokes. What an incredible and powerful story to write.

While this book shows a lot of Winter's struggle with PTSD, it also follows her struggle to find out what happened to her sister. After seeing her sister murdered from a ViSE, Winter is determined to find out more. She and Jesse visit various clubs that Rose used to go to, and they try to hunt down clues and follow Rose's original recordings, before her death. As far as mysteries go, this one was a good one.

I was in NO way prepared for the ending, the final twist. I knew that certain things had to do with the ending and what really happened to Rose... but the way it happened, how Stokes brought it about... wow. My mind was totally blown. I think I had chills at one point. I was and wasn't expecting it - mostly wasn't. I wasn't expecting that magnitude of how-crap-ery. I have no idea HOW Stokes is going to top that twist, in book two!

There is romance in this book! It's not terribly important to the book, but it becomes a bigger part towards the ending, both in a good and bad way. I wanted to shake Winter just a little, at the very end, but then I reminded myself that she had every right to react the way she did. In general, the romance is sweet. And a little sad - Winter had and has a lot going on, but I felt bad for Jesse. It's complicated! As is practically everything in this book.

I am zipping my lips! There are a ton of things that I feel like I could accidentally spoil, which I don't want to do. You'll WANT to have your mind blown by this book and it's ending, trust me. Maybe it's just me but I was so bug-eyed, reading the rest of the book after the big climactic twist.

I didn't mention anything about the world-building or genres - this novel as science fiction and thriller elements. Science fiction, because of the ViSE tech, which is pretty cool. It's kind of like virtual reality? But not really? Basically you can experience the real feeling of bungee jumping while viewing it, but it feels real because someone actually did it, and recorded his/her neural impulses as he/she was doing it. If that makes sense? And then this book is somewhat of a thriller too.

Overall, I liked this book. Yes, I'm not a fan of YA books with such a big tough-issue focus. They're just not for me, and yet, I still enjoyed this book very much. And a high-five to Stokes for the diverse characters who didn't seem like they were simply filling an archetype/role!

Ehh, little things niggled at me, nothing to make me feel negatively towards the book. I've already mentioned that I'm generally not a fan of books with tough issue concepts - but I still liked this book, and thought Stokes did a great job writing the "tough issue" aspects.

I didn't like that Winter didn't apologize (or get the chance to apologize) at the very very ending. This won't make sense to you since you may not have read the book, but I personally think the author could have ended the book with a short scene including Winter apologizing to a certain someone. She NEEDS to do this, and I really hope she does, in book two. Part of me wants to make excuses for her behavior because she's been through a lot, but then I also remember that she is a teenage girl and overreacted. A lot. Issues or not, she crossed a line. But I'm hoping this is addressed in book two.

Just a general thought - I hate it when a guy messes up and has to beg and grovel and basically die before the girl forgives him, but if the girl messes up, she doesn't have to apologize or grovel. This is wrong, and romanticizes the idea of relationships. Boys do NOT magically forgive you without you apologizing or talking about it. Nope. This is a pet peeve of mine in fiction, both in YA and adult novels. It drives me crazy!

I'd recommend this book! It's worth the read, especially since it felt like there was a part of the story that would appeal to this crowd or that crowd. Sci-fi fans, thriller fans, tough-issue fans, etc. The issues I had with this book are fairly minor (ignore the fact that the previous section seems long), and pretty much specific to me/my preferences.

4 stars. I'm excited about the sequel for several reasons - I need a sequel to this crazy ride, and it's the conclusion to the series! I do love this duology trend in YA. Less annoying waiting and forgetting-all of-the-details-of-the-series-by-the-time-the-next-book-publishes!