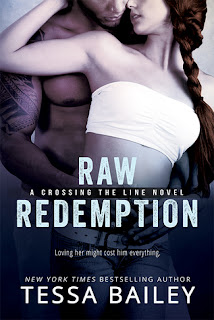 Disgraced cop Henrik Vance is having a shit year. Banished to a derelict undercover squad, he’s been tasked with hunting down the daughter of Chicago’s most dangerous criminal. His obsession with saving the beautiful girl destroyed his career. And this time, it might cost his life.

Ailish O’Kelly doesn’t need a hero. She’ll save herself from her father’s violent criminal dynasty, thank you very much. Unfortunately, the sexy as sin cop who crashes her hideout isn’t hearing reason—especially not after the kiss that becomes much more.

His boss wants her as an informant. Ailish wants Henrik to keep whispering filthy things against her skin. But she knows too well the evil they’re up against, and when it comes down to protecting the man who owns her body and soul, she only has one choice…

I've read two books from this series - His Risk to Take (a novella), and Boiling Point (book three). I didn't really love either, so I wasn't sure if pursuing this third book would be worth it. I haven't read books one or two, though I may give book one a shot (it's currently on sale for $0.99 - but this won't last long!). I'm pleased to say that I liked Raw Redemption a lot!

We're introduced to Henrik in Boiling Point (book three), when he joins the squad. He used to be a cop, but he lost his badge after destroying evidence that would send Ailish O'Kelly to jail. Fast forward to the present - Derek (the captain) sends Henrik to find Ailish and bring her back to Chicago, after she runs away from her father. Her father has put quite the price on her head to bring her back, but Derek wants her back in order to take done mafia boss Caine O'Kelly. Henrik wants Ailish to be free, and safe, and far away from her father. But he also wants so much more from her. His obsession with her takes a physical, heated turn when he realizes that she wants him just as much as he wants her. But keeping her safe may mean deceiving her, a risk that Henrik may have to take.

These are full-length novels (except His Risk to Take, a novella), well over three hundred pages. I honestly LOVE this; often times, I find Entangled books entirely too short (especially from their Brazen line). These Entangled Select novels are fantastic! Full-length and SUPER steamy. Well, Tessa Bailey's books are always steamy, no matter what she's writing about.

I liked Henrik in Boiling Point, but I adored him in this book. He's loyal and overprotective and a sweetheart. At first I thought it was SO weird that he is still obsessing over a girl he helped briefly, but it's clear that she made an impression on him back then, even if they never touched or interacted a lot. Henrik is every inch an alpha male, but a sweet and fiercely overprotective one. He would do anything for Ailish, and is willing to protect her in every way. I love how devoted he is to her; at first it seemed weird, but it became so endearing and powerful.

Ailish is young, the only child of Caine O'Kelly, who makes big money on betting and bookkeeping. Ailish has always lived in a gilded cage, never allowed to leave free and follow her heart and her dreams. She's only had sex one time, years ago, and no man was every allowed to touch her again. Ailish is a bit of a tease, but not in a physical sense. I LOVE how she teases Henrik - but then, he dishes it right back sometimes. I like that Ailish is headstrong and defiant, but not in an annoying way. I like how, in the end, she takes a stand against her father.

Ahhh, the chemistry between these two! Bailey's books seem to get steamier and more creative as they come. There are some seriously intense and sizzling scenes in this book, and none of them seem repetitive. You'd think, given the amount of books Bailey has written, that sexy scenes would start to repeat and blur together, even between series. But nope, somehow all of Bailey's books are so incredibly unique, creative, and hooooot. *fans self*


Henrik and Ailish's relationship develops solidly, but so does the series in general. This is the last book in the series, and I love how things wrap up for everyone. We get a sneak peek into Sera and Bowen's life, as well as Connor and Erin's. I don't think we get any hints about Austin and Polly's, but one can only guess, with those two. And Derek! I like Derek - I really need to read his book!

Overall I really enjoyed this book. It was fiery and intense and steamy and very engrossing. While I mostly talked about Henrik and Ailish and the romance, I really liked the crime story behind this book, and the resolution is very satisfying. It was an intense, thrilling ride, and I loved reading it through the eyes of Henrik and Ailish. I'm glad I gave this one a chance!

I think you'll only understand this if you actually read the book - Ms. Bailey, you practically promised us a no-sheets scene in this book! It was totally set up in the story, for that to be one of the closing or epilogue scenes! *cough*

While I can't say anything about the series in general (I haven't read half of it), I'd recommend this book as a standalone. You don't need to read any of the previous books in the series to read this one, and this one stands well on its own. So, if you're a fan of adult romance novels, this is one to look out for. Or the author in general!

4 stars. I'm a little sad to see this series end! I think I'll pick up Bowen and Sera's story, and see how it all started. I can count on Tessa Bailey to deliver a suuuper steamy romance novel with a strong female protagonist, swoony alpha male, and a wonderful story!