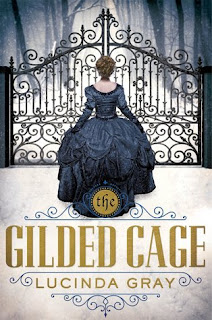 After growing up on a farm in Virginia, Walthingham Hall in England seems like another world to sixteen-year-old Katherine Randolph. Her new life, filled with the splendor of upper-class England in the 1820s, is shattered when her brother mysteriously drowns. Katherine is expected to observe the mourning customs and get on with her life, but she can't accept that her brother's death was an accident.

A bitter poacher prowls the estate, and strange visitors threaten the occupants of the house. There's a rumor, too, that a wild animal stalks the woods of Walthingham. Can Katherine retain her sanity long enough to find out the truth? Or will her brother's killer claim her life, too?

Yet another "okay but not great", "I liked it but didn't love it" type. Actually, I don't even know if I liked this book? I think it was okay and worth the read (for me, since I had a review copy), but not really that good. I'm still between three stars and two stars, honestly. You're not missing out - I'd recommend skipping it if you don't have a review copy.

This book starts with the prologue, in which Katherine Randolph and her older brother George are living on the farm in Virginia with their foster parents. One day, a man arrives, and asks for George, who isn't there. The man tells Katherine that he'll wait for George to come back, and that her and George's futures are about to change. Then the story really starts, at chapter one, with George and Katherine in England, four weeks later. Their grandfather died, and since their parents are also dead, everything goes to George, and Katherine. Their cousins Grace and Henry are their guardians at Walthingham (the estate/land/property George and Katherine inherit). But then George dies mysteriously, drowned in an icy lake. Katherine knows his death is no accident, but no one believes her. Though she is to be in mourning for the next six months, Katherine is determined to find out what happened to her brother, and what is really happening at Walthingham.

I like historical fiction novels. I read a lot of adult historical romances, and so reading a YA historical fiction novel is usually pretty fun. Gray does a good job of making the setting very believable and authentic, with all of the customs and traditions and proper behavior and manners. Though I hated it, the author got Katherine's helpless right - as a young, newly titled woman, Katherine could not do much at first, to figure out what happened to her brother. She is often ushered from the scene, sent to bed, told not to worry about things. This is true of the time period, and heartbreaking.

I didn't mind Katherine - though she is often helpless to do anything, she is inquisitive and very determined. She has good instincts, but she often tries to see the best in people. She's sweet, but she also has a temper. I liked reading from her perspective.

I had my suspicions, in terms of who killed George. I wasn't really sure what was going on in the estate and the woods in general though. Many were afraid of the "Beast of Walthingham", which Henry and Grace dismissed as folklore. But Katherine wasn't so sure... she also wasn't sure what to think of a poacher and former gamekeeper at Walthingham, who has a knack for showing up where he isn't wanted. Same for two men who kept demanding for the attention of the master of Walthingham. Mystery upon mystery! Again, I had my suspicions about the killer, but what I wasn't sure about was the creepy stuff happening in the woods, and the shadows that Katherine kept seeing.

So the mystery was kind of cool to try and figure out. I didn't really love the story, but it was interesting to read it. The ending had a lot going on, but I liked that everything wrapped up. Now, on to that which I didn't like!

Apologies if this section doesn't make sense or doesn't really explain how I felt. Honestly I'm feeling a little apathy at the moment, and there are things that I know I didn't like as I was reading the book, but I couldn't bring myself to really care enough to try and explain them. So, bear with me.

Where to start? I'm not even quite sure of what I didn't like. To me, the plot of the book felt rushed and choppy. Things happened way too quickly. Sometimes rapid-fire action works in a story, but this story didn't feel fleshed out.

We get to know Katherine really well, as she is telling the story, but the other characters felt very one-dimensional. I didn't feel any real inclination towards any of the secondary characters, and there were plenty. It's clear that Katherine has a little crush on John, one of the footman in the house. And Katherine befriends Jane, the magistrate's daughter. There is Grace, Katherine's cousin, who is kind of cold, though you wouldn't know at first. Henry too - he seems nice, but is he really? I liked John, but again, one-dimensional. The only character that truly drew a reaction from me was Grace - I hated her from the start.

There are two romantic love interests in this book, though I can't really call it a love triangle? It's weird. We know Katherine developed a crush on John at some point. She meets Mr. William Simpson, the family's lawyer, and he's this adorable awkward clumsy mess around Katherine. She kind of develops a crush on him too. The thing with this romance is that the feelings don't develop at once - basically, the romances happen separately. At first there is one guy and Katherine, and then that guy stops showing up in the story (for good reason). And then there is Katherine and the other guy. I don't really like any story with two love interests, whether they are simultaneous or one after the other. I liked both men in this story, but only one as a love interest. I picked the wrong side. I still like him too, but I didn't like the way the author went about "resolving" the triangle.

Speaking of romance - it was insta-love on both accounts. Not really enjoyable, and not really a romance to root for (in either case). Katherine and one guy were really passionate, for like, a second. Katherine and the other guy are really dull and boring. But in both cases, we have insta-love, and there is a serious lack of scenes with Katherine and either love interest together. Boring!

Did I mention that the whole story felt rushed? The ending especially. SO much happened in the ending, and it was hard to pick apart what made sense and what didn't. We have kidnappings and asylums and high-speed chases on horses - the asylum part threw me off, I wasn't expecting that.

Even after finishing the book, I'm still a little unclear as to what was happening in the woods, and what was scaring everyone. Was there a Beast of Walthingham? Because the ending of the book says yes AND no.

So, the book felt rushed, the characters were flat, there is sort-of kind-of love triangle, the ending was a little confusing (though, for the most part, it wrapped up everything). This book is very short, which doesn't really help in terms of the rushed plot and lack of characterization/character development. I don't mind that I read this book, but I didn't really like it. Meh.

Ehhh, no. I can't recommend this book. I hesitate to give this book two stars because I don't really feel negatively towards this book - it's more like it wasn't wonderful and I just don't really care. It's one of those books that I'll completely forget about, given some time from now. I like seeing more historical fiction in YA, but this one didn't do much for me.

2.5 stars -> rounded down to 2 stars. I was pretty engrossed as I was reading, and I don't really feel too negatively towards this book. I'm just feeling kind of ehhh. I'm glad I had the chance to read it, glad I read it, but it's not going to be particularly memorable for me.