Review: A World Without You by Beth Revis 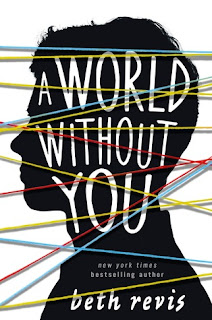 A World Without You by Beth Revis
Publisher: Razorbill
Publication Date: July 19, 2016
Rating: 4 stars
Source: Galley from First to Read

Seventeen-year-old Bo has always had delusions that he can travel through time. When he was ten, Bo claimed to have witnessed the Titanic hit an iceberg, and at fifteen, he found himself on a Civil War battlefield, horrified by the bodies surrounding him. So when his concerned parents send him to a school for troubled youth, Bo assumes he knows the truth: that he’s actually attending Berkshire Academy, a school for kids who, like Bo, have "superpowers."

At Berkshire, Bo falls in love with Sofia, a quiet girl with a tragic past and the superpower of invisibility. Sofia helps Bo open up in a way he never has before. In turn, Bo provides comfort to Sofia, who lost her mother and two sisters at a very young age.

But even the strength of their love isn’t enough to help Sofia escape her deep depression. After she commits suicide, Bo is convinced that she's not actually dead. He believes that she's stuck somewhere in time — that he somehow left her in the past, and now it's his job to save her.

My initial thought upon finishing this book: wow, that was mind-blowing. I didn't have pretty much any expectations when going into this story, other than hoping it would be awesome because it is a Revis book, and I love her books. Reading this book days after reading Paula Stokes' Vicarious worked out strangely for me, as these two books are very, very similar in the "big twist". And I highly enjoyed both books!

A World Without You starts with the memorial service of Sofía, who was Bo's girlfriend, and fellow student at Berkshire. Bo is angry and frustrated; he knows that Sofía isn't actually dead, and that he can go back in time and bring her back. After all, she disappeared because he took her to 1692, and accidentally traveled back in time... without her. But then government investigative officials come to Berkshire, and suddenly everyone except Bo is under the belief that Sofía is really dead, that she committed suicide. Bo is sure that the officials are alternating everyone's perception of reality. But Bo will stop at nothing to bring Sofía back, even as time is breaking around him.

This book is written primarily in Bo's POV, though every now and then a chapter is written from Phoebe's POV. Phoebe is Bo's younger sister, a workaholic and very driven. She's a senior in high school who has excellent grades and is so "normal" compared to Bo. At first I didn't care for Phoebe's chapters, because I wanted to get to Bo's. But then I started seeing why Phoebe's side of things is so important. And her chapters always made sense, whereas Bo's sometimes didn't (especially towards the end). I felt bad for Phoebe, at times! She felt trapped in her house, and sometimes jealous of Bo's freedom. If only she knew...

It wasn't hard to like Bo, or to really feel for him. He loved - loves - Sofía, and his determination to get her back is impressive. He likes it at Berkshire, and feels comfortable there. The group that lives with him specifically within the school is made up of five people - Bo, Sofía, Ryan, Gwen, and Harold. Everyone at the school has some sort of ability, and Bo's is time travel. Sofía's is invisibility. Ryan's is telekinesis. Gwen's is pyrokinesis. Harold's is the ability to see and hear and communicate with the dead.

Time-traveling back to 1692 when Bo accidentally left Sofía is near impossible for Bo. He doesn't have control over his powers, and he never has privacy, with the government officials there to investigate Sofía's death, and Bo's parents constantly hovering. I was anxious to see the first time Bo traveled back in time. I was not disappointed!

This book is sort of told with visits to the past, but not really flashbacks, if that makes sense. Sofía is "dead" at the beginning of the book, and so all of Bo and Sofía's relationship is shown to us readers via the past, as well as Bo remembering times with her. Sometimes he visits her in the past. A lot of times, he daydreams or remembers scenes that he shared with her. They had a sweet relationship, and it was almost tragic to experience it.

I'm going to honest - I knew this book dealt with the paranormal (i.e. time travel, and the other superpowers), but I didn't realize how thoroughly entrenched the mental illnesses and health issues were, in the story. Usually I'm not one for those types of books, but I love how Revis worked Bo's mental health into this story. Absolutely loved it.

There were several twists to this story that, even if you anticipate them, they were incredibly and shocking to read and unfold. About a third of the way in, I had a good idea of what I thought was going on... and that was exactly what was happening. But Revis tells the story in such a way that we see everything from Bo's eyes, so genuinely.

I thought the ending was going to be morbid! It was and it wasn't. The ending was uplifting in a way, and I definitely liked it. The story in general was equal parts sad and beautiful, and I'm so glad I gave this book a chance. I knew nothing of the story, but I have no regrets!

The only thing I might say is that towards the end, things got a little too confusing. Bo starts to lose track of what is real and what is not, and he starts to lose time. We have Phoebe's POV to balance out the storm in Bo's head and life, but I was a bit confused at times, towards the end of the book. Which, realistically, made sense, as to why I was confused. You'll have to read the book to know what I mean! Confusing in a good way, I suppose.

If you like psychological thrillers, this is definitely a book for you. And if you like this one, try Vicarious by Paula Stokes (or vice versa). A World Without You was sweet and heartbreaking, intriguing and thrilling. It was bizarre, and untangling reality and perception was mind-blowing. All in all, a fascinating and enjoyable read!

4 stars. I was very surprised by this book, its content and story! I didn't know much about it before starting to read it, so everything was completely fresh to me. I hadn't even really read the synopsis! Going into a book blind is the best, sometimes. And it was perfect, with THIS type of book!