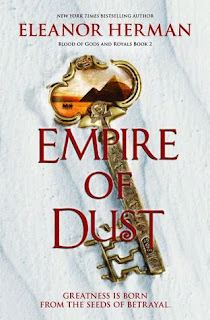 In Macedon, war rises like smoke, forbidden romance blooms and ancient magic tempered with rage threatens to turn an empire to dust

After winning his first battle, Prince Alexander fights to become the ruler his kingdom demands—but the line between leader and tyrant blurs with each new threat.

Meanwhile, Hephaestion, cast aside by Alexander for killing the wrong man, must conceal the devastating secret of a divine prophecy from Katerina even as the two of them are thrust together on a dangerous mission to Egypt.

The warrior, Jacob, determined to forget his first love, vows to eradicate the ancient Blood Magics and believes that royal prisoner Cynane holds the key to Macedon's undoing.

And in chains, the Persian princess Zofia still longs to find the Spirit Eaters, but first must grapple with the secrets of her handsome—and deadly—captor.

New York Times bestselling author Eleanor Herman entwines the real scandals of history with epic fantasy to reimagine the world's most brilliant ruler, Alexander the Great, in the second book of the Blood of Gods and Royals series.

I debated about how I wanted to rate this book, because it's getting a solid 3.5 stars from me. But I need to round, and I've decided to round up! Ultimately I liked this book more than I liked Legacy of Kings (which I thought was okay - boring in the first half, but much better in the last quarter or so). This still isn't a favorite series ever, but I'm happy to see a better sequel than its predecessor!

So many plots happening at once. Alexander is the prince regent, trying to gain the respect of his people, and trying to win wars happening all at once. Hephaestion, his best friend, is struggling with no longer being needed as a friend by Alexander. But Heph has new things to worry about - like a prophecy he has found, that could prove to be deadly for Alexander and Katerina. Katerina is still secretly Alexander's twin sister - no one knows except a select few people. She and Heph are sent by Alexander on a secret mission to retrieve something. Jacob, who is in love with Katerina (since childhood), is now one of the Aeserian Lords, enemies of Prince Alexander. The Lords' new prisoner, Princess Cynane, seems to have Blood Magic, which the Lords are out to eradicate. And then we have Zofia, the princess who was engaged to Alexander, but is now declared missing and possibly dead. She's trapped by her captor, who doesn't seem to be buying her cover story... and is as seductive as he is mysterious. Much trouble is brewing in this intense sequel novel that had me hooked from start to finish.

That would be the first thing I'd like to talk about - I experienced basically none of the boredom I felt while reading Legacy of Kings - the first half of that book, anyway. I remember a ton of people DNF-ing Legacy of Kings, citing that it was boring and/or they couldn't get into the story. And I don't blame them! The story really picked up in the last twenty-five percent. In THIS book (Empire of Dust), the story is pretty much on "go" from start to finish. I don't think I felt bored at any one spot! There were a few times when I flipped a page faster than I usually would, but mostly because I wanted to know what was happening next.

There are SO many plots and perspectives in this book. Let's see... we have Alexander', Heph's, Katerina's, Jacob's, Cynane's, Zofia's, and Olympia's (Alexander and Katerina' mother). But most of the POVs overlap - like, Heph and Katerina were almost always in the scene together. So it really wasn't bad! Especially since all of the POVs were in third person, so you never really got confused.

My favorite POV to read from - probably Heph's, surprisingly. I didn't really care much for Heph, in Legacy of Kings - in fact, I don't think I liked him at all. But I really felt for him, in this book. He gets punished in many ways, mostly emotionally.

Alexander's plot wasn't the most exciting, despite him running wars and such. He has someone beheaded, and replaces basically his whole counsel, in an attempt to look more powerful and in control, but it shakes him. I preferred reading about Heph and Katerina, who were off to a faraway (ish) land to find something. Zofia's story was also a favorite. At first I hated her captor, and was sure that this would turn into Stockholm Syndrome. BUT that wasn't the case.

I should talk about romance. I TOTALLY ship Zofia and her captor. Oh my goodness, I feel so bad for her. She's conflicted because she spent days, weeks hating him for capturing her. But then he reveals something critical, and she realizes many things. I felt the chemistry between them many times, and the emotional part of their relationship. No Stockholm Syndrome (in my opinion).

Heph... and Katerina! They're (hopefully) going to be a thing. I ship them! Heph is a lot swoonier than in book one. Jacob is far away and doing evil things with the Aeserian Lords, and Cynane is isolating herself by also doing crazy things. Alexander is a solitary creature, so there is no romance there. I love Heph and Katerina, and Zofia and her captor (who shall not be named at the moment). This captor is also rather swoony!

So, I liked Heph more (he matures and grows and he's not as dumb - though he has one STUPID moment that made me want to kick him where it counts). I liked Katerina just fine, and she also experiences some good character growth. I think I was most impressed with Heph and Zofia's character growth. Everything else, I either liked or appreciated, and they had good depth. But I liked Heph, Katerina, and Zofia the most!

World-building = flawless. Seriously, Herman does an amazing job with crafting the setting and characters and adding touches of authenticity to the story. This is a unique story because you don't find a lot of YA books set in this time!

Overall, great characters, better story/progression, more interesting twists (I didn't really mention the plot and twists, but they're there and they're intriguing!), cute romances (no love triangles though). MUCH better than Legacy of Kings, in my opinion.

I will say that there were times when I was read a chapter from one character's POV and really REALLY wanted the next chapter to be in that same character's POV, because of what was about to happen to that character. I don't like when scenes are broken like that. But, it comes with the multiple-POV territory!

There were a lot of anachronistic phrases in this book, sadly. They stuck out like sore thumbs. I wish I'd flagged them in the eARC as I read. But they are so obvious! You cannot have colloquial twenty-first century slang and speech in this time of story, set in 300-400 B.C.!

3.5 stars -> rounded up to 4 stars. It's a nice feeling when you like a sequel more than the previous book! It shows that the author is writing better, the story is getting more interesting, and the reader is becoming more invested. I cannot wait to read Reign of Serpents!