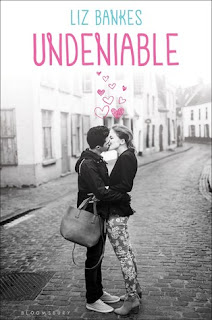 After Gabi's relationship with her long-time boyfriend Max falls apart, she just needs to get away—and she finds the perfect escape in a summer internship for her favorite TV show in London. All the gorgeous actors in the cast will more than distract her from the Break-Up.

Then she meets Spencer Black: student, show extra, expert flirt. Spending time with him is fun, intoxicating, and uncertain. Their relationship is heating up when he lands a featured role on the show. Will his newly found fame break them apart, or is Spencer the one?

In this steamy love story, the drama is just as real off-screen as it is on.

This book was cute. It's pretty rare that I might call a book "cute", but when I do, it's usually about a contemporary novel. This is a light, fluffy contemporary romance novel, with a lot of humor and huge dose of awkward. Gabi is such a unique character, as crazy and awkward as she is. While it's clear that I didn't completely love this book, I'm glad I gave it a shot. Thank you, Bloomsbury, for the review copy!

Gabi just broke up with her boyfriend of three years, Max, about a month ago. Now, for the summer, she's headed off to London for an internship for a TV show that she loves, The Halls. She's only a runner, fetching coffee and whatnot. But at the set, she meets one of the extras, a handsome, flirtatious, and clever guy named Spencer. At first they're just hanging out, but things start to heat up. But is Gabi ready to move on? And is Spencer, an actor, the right guy to move on with?

First I'll talk about Gabi - she is a very different and fresh character in YA. She's so awkward, and she literally says what she is thinking without thinking about it. This really bothered me at first - this girl has NO filter, and never thinks through what she wants to say. But eventually, I either got used to it, or stopped caring. She's hilarious, she's off the charts bats**t crazy, but I can see why people like her. I personally don't think I could handle her though, fyi. She's... difficult. Especially for someone as sarcastic and direct as me (but direct as in I will tell you the truth, even if it insults you. No games.)

So I think I liked Gabi. She has a lot going on - besides breaking up with her boyfriend of three years. They were really close, and had something going on that shocked everyone. And something happened in Gabi's family, and it tilted the axis of Gabi's world. And then she broke up with Max. And now she's in London. So many changes, in a short time!

Spencer is a hot extra on the show. He flirts with everyone, but seems to be interested in Gabi. They hang out, explore London, but then things take a different turn. Gabi initially didn't want to engage in anything with him but... she started to think less about Max when she was with Spencer. Plus, Spencer is a good guy. Nice, charming, handsome, thoughtful.

And then he lands a bigger role in the show, and things start to get a little less honeymoon-y for them. Gabi and Spencer had been keeping their budding relationships under wraps, but now Spencer is telling everyone that he and his character are both single. And he is pushed towards his co-star, Heidi. Gabi brushes off this... until she can't.

This book actually has two plots going on, in a way. We have everything currently happening, told from Gabi's POV. And then, in italics, pretty much before every new chapter, we have a couple of pages of what happened before Gabi came to London. What happened to Gabi and Max. What happened to Gabi's family. It's slowly revealed, bit by bit, which I think really worked for this story. It was all I could do not to skip ahead and find out exactly what had happened in the past!

I liked the pace of the story, as well as what was happening in the story. Gabi grows as a character as the book goes on, though she is still her awkward, crazy self. The book really centers on Spencer and Gabi's relationship, but it is also a lot about Gabi's breakup with Max, and her close friendships with three other girls.

The ending of this book is... weird. I'm not sure I like it or hate it. I think it has enough closure to be acceptable for a standalone, but I can't help but want more. See below.

A couple of things bothered me. First - Gabi is a difficult girl to like. Honestly, I hated her in the beginning. She is SO awkward. Like it's borderline vertically challenged. She can't keep her balanced, and she falls out of a train. She has no filter and probably needs a muzzle - I'm not even a little bit kidding. She says things and does NOT think about what she says. It bothers me so much that she doesn't THINK; she just blurts out things. It's endearing to some, but I would probably smack her within five minutes of knowing her. Did I mention that she is awkward? So awkward. I cringed so many times. But I also laughed a lot - laughed at her. It's so funny to laugh at some of the ridiculous things she does and says.

I did like the amount of humor in this book though.

So it was a pretty big thing, to be annoyed with the protagonist for quite a bit of the book. At some point, either I got used to her, or she stopped being *as* annoying. I can safely say that she is a unique character in YA contemporary (which is rare!), but I'm not sure if she's all that likable. You might struggle with her!

The other big thing I didn't like was the ending. Like I said above, the book wraps up and we definitely have an acceptable degree of closure but... it wasn't enough. There were certain things we needed to know specifically about Max and Gabi that we aren't made aware of. I didn't like how fluid the ending was, how fluid Gabi's relationships became. If that makes sense. Hopefully I didn't spoil anything - nothing here is specific. But basically, the ending is a bit vague and not satisfying, though it does wrap up like a standalone should.

The romance wasn't *as* steamy as I'd expected. Sure, there are plenty of mentions of things and actions that COULD be steamy. But nothing is even close to explicit (like, a young adolescent or maybe even MG reader could be fine with this book). I feel a bit misled, because I was thinking that there would be some steamy Katie-McGarry-YA type of romance. Not quite. Again, there are things that could be seen as steamy, but these things are very vaguely alluded to.

I can't say I'd recommend this book, because it's not particularly memorable (except maybe Gabi, she is so odd) or lovable. I mean, I liked it (I think), but I didn't love it, and I probably wouldn't tell someone else, "You should totally read this contemporary novel I just read!". There are better contemporary in YA! This one was okay though.

3 stars. On the dot, in the middle. I enjoyed it (for the most part) while reading, but I probably will never reread it. It's possibly that it just wasn't my thing, and someone who isn't bothered by the things that bothered me might LOVE this book. I already know contemporary isn't my favorite genre in YA lit, so there's that! I do try with YA contemporary though.