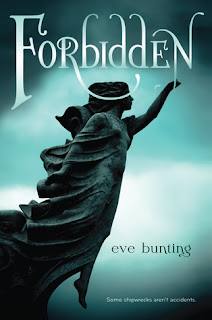 In early-nineteenth century Scotland, sixteen-year-old Josie, an orphan, is sent to live with an aunt and uncle on the rocky, stormy northwest coast. Everything and everyone in her new surroundings, including her relatives, is sinister, threatening, and mysterious. She's told that Eli, the young man she's attracted to, is forbidden to her, but not why. Spirited, curious, and determined, Josie sets out to learn the village's secrets and discovers evil, fueled by heartless greed, as well as a ghostly presence eager for revenge. An author's note gives the historical inspiration for this story.

This book was incredibly short! While the timing for a short book was great, it was also not the best for the story, which really felt short (and not necessarily in a good way). Still, I finished this book quickly and was very engrossed in the novel. While it wasn't AMAZING, I was entranced and engrossed and I couldn't put this book down.

It's 1800s Scotland, and Josie is now a sixteen-year-old orphan. Her parents died just recently of influenza, and she has two more years until she can access her inheritance and live in her parents' house. She is sent to live with her uncle and aunt, and there is something very strange about the pair... as well as with the town of Brindle. Her uncle and aunt seem interested solely in her inheritance. The town is full of secrets and mysteries... as is the one kind person to her, Eli Stuart. Even Eli can't answer her questions - she'll discover exactly what's going on for herself.

Like I said, this book is super short! It's a double-edged sword, but it can definitely be seen as a positive. If you're in the mood for a short, paranormal historical fiction novel with a mysterious side, this book is satisfying.

Josie is so innocent and proper, worried about manners and propriety and doing right by her parents. Then she arrives at Brindle and realizes that there is more going on than anyone will tell her. Her uncle and aunt aren't proper folk like her parents, and they aren't as well off as her parents had thought. Josie wants to try to get along with her uncle and aunt, but she does not like being commanded or yelled at or ordered. She stands up for herself, but at the same time, she tries to forgive her aunt and uncle too.

The pace of this novel is fast, but the book is short, so it feels like there were only four or five real scenes in this book. Eli is introduced quickly, and he is a constant throughout the book. Eli is an enigma, helping Josie at every turn, yet not explaining anything to her. He is protective of her, realizing that she is a newcomer. You can't help but like Eli. But Eli is forbidden, though Josie is not told why. There is a lot of paranormal action in this book, surrounding just about everyone.

The climax and end of this book is when all is revealed, when we get to see what the people of Brindle are up to, and why Eli is forbidden. Some scenes were heartbreaking, but others were hopeful. I think the author gave the book a fitting ending - especially those last few lines!

My biggest complaint is something that I also liked about this book - the length. On the one hand, I read this book really quickly, and I was really intrigued by the book. On the other hand... it was short. There were not many scenes at all - maybe ten, maximum? Between five and ten? Like, we meet Eli once, and on the second meeting, Josie is already tingling from new feelings for the boy. Within no time, the book is halfway finished, and I felt like I'd only read about three completed scenes.

The scenes that I read were well-developed! But the book overall could have been more fluffed up, fleshed out, and developed. The romance could have been so much more - you could do SO MUCH with forbidden romance! The cruelty of the uncle and aunt could have drawn out, making Josie's situation so much more agonizing (this sounds awful of me, I know). The author could have made this book so much more!

I already touched on the romance, but the author could have had waaay more scenes between Josie and Eli. Way more scenes in general, but especially featuring the pair. The romance has a huge place in this book (or it's supposed to), so I would have developed their relationship and feelings, maybe throw in some steamy encounters, amp up the chemistry and romance in the forbidden sense, and then lock in the ending.

So you see, my biggest issue was with how short this book was! It could have (and should have) been so much longer, at least another fifty, one hundred, even one hundred fifty pages longer! It felt like a novella or super short novel!

Ehhh. Like if you're in the library and love the cover, maybe. But I wouldn't necessarily make a point to preorder it or buy it or put a hold on it. It's a decent story, definitely interesting, especially with the paranormal aspect (think ghosts!), but it's not one that I would tell people specifically to get, or would probably remember years from now.

3 stars. Not bad! To be honest, I enjoyed the book. But I would have enjoyed it more (I would hope) if it were longer, and the romance (which is a big focus in this book) to be more frequent and developed in the book. Still,  a good novel!