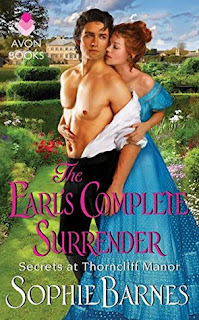 Despite the diversions offered at Thorncliff Manor, former spy James, the Earl of Woodford, has one purpose in staying there. He must find an encoded book that exposes a conspiracy within the British aristocracy. And he must do so without revealing his purpose to the clever, tempting Chloe Heartly. The lady has a knack for appearing wherever it is least convenient. In the library. In the salon. And, especially, in his arms . . .

Somewhere within Thorncliff's labyrinth of rooms lies the journal Chloe desperately seeks. When she realizes the brooding, handsome earl is hunting the same quarry, Chloe enters into an uneasy partnership. But in the face of public danger and enemies hiding in plain sight, both must decide how much they're willing to risk to solve the mysteries of the heart.

So many three-star reads recently... unfortunately, this is yet another for me. With this book, I liked it, so it's definitely on the more positive side of three stars. But my biggest thing with this book was the disappointing lack of sexual chemistry James and Chloe - I prefer my historical romance reads to be fairly steamy and chemistry-filled. The potential was there, in this book, but the scenes were not.

Lady Newbury (Chloe) has been a widow for a year, and coming to Thorncliff Manor is difficult for her still. She isn't ready to come back into society, especially after the humiliation that her late husband put her through. But she is searching for a journal. As it would turn out, the Earl of Woodford (James) is looking for that same journal. On a mission for the King, James needs to have the journal in order to discover some important information. James and Chloe keep running into each other in Thorncliff as they both search for the journal. When they find out that they're looking for the same thing, they decide to work together. But someone might beat them to it - or prevent them from finding it in the first place.

I thought the previous book, Lady Sarah's Sinful Desires, was excellent. This book is set parallel to that story, still at Thorncliff, at the exact same time that book one is occurring (if that makes sense). The premise of this series is really cool, in that manner.

James is a spy, working for the King. He is a bit odd, and doesn't fit in with the rest of the eligible bachelors, because he has excellent memory. None of the gentlemen usually want to play cards with him or such, but it doesn't really bother James, because he is very bookish and is often in the library (even when he isn't looking for the journal). James is such a different historical romance hero, with his book-loving tendencies, and the fact that he isn't popular and charismatic like most HR heroes. Yet he has his own appeal and charm, and he also likes to box and fence. Hello, great physique.

Chloe is a widow and now eligible dowager. She was totally infatuated with her late husband, but he hurt her emotionally, and then he died, and Chloe isn't ready to be out on the prowl. She's also a lover of books, and that is how she runs into James (literally) in the library. Chloe is fascinated by James, but refuses to believe that she is falling for him, especially in a matter of days.

The whole journal and spy plot was very intriguing! It almost seemed more important than the romance (which is probably why there weren't sexy times, if you catch my meaning). There are betrayals and secrets and craziness, action that you don't usually find in historical romance novels. The ending was pretty much expected but absolutely lovely and satisfying!

My biggest issue was with the chemistry between the protagonists. It just wasn't there. Sorry if I spoil anything - but there was only ONE sex scene. And it was *barely* a sex scene, because there was so little foreplay and during action laid out. Not to say the scene was rushed, but it just wasn't all there. An adolescent could have read this book. Like, I have my warning above stating that this is an adult book, but you could probably give this to a tween, and there would be nothing shocking in this book. Nothing is explicit, and there is only one sex scene that should have been explicit in content, but wasn't at all!

But seriously - one sex scene? Come on. There are so few kisses and sneaky encounters and breathless scenes leaving someone wanting more... it definitely hindered the romance in this book. We can't connect as well with the couple without the chemistry, the action before things get super intensely heated (which they never did, in this book). I expected so much more!

I'd recommend book one for sure! This one, I'm not so sure about. It was good, but not romance-filled, so maybe not? If you're not an adult romance type but like historical fiction, then this might actually be something you might enjoy, because the romance is very non-explicit and mild. If you're like me and like steamy romances in historical romance novels... skip this one.

3.5 stars -> rounded down to 3 stars. I like Sophie Barnes' stories, but I think the romances in her books just aren't steamy enough for me. Still, she is an excellent storyteller, so I could see myself reading more books by her! And three stars isn't bad, in any case.