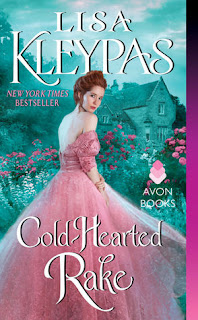 Devon Ravenel, London's most wickedly charming rake, has just inherited an earldom. But his powerful new rank in society comes with unwanted responsibilities . . . and more than a few surprises. His estate is saddled with debt, and the late earl's three innocent sisters are still occupying the house . . . along with Kathleen, Lady Trenear, a beautiful young widow whose sharp wit and determination are a match for Devon's own.

Can she keep from surrendering her heart to the most dangerous man she's ever known?

Devon is a freshly named earl, inheriting the title and all accompanying lands from his dead cousin, who was kicked off and trampled by a spirited horse. But the properties that Devon inherits are in shambles. Who would want to sink so much money into such a hovel? There is no way Devon wants to take on these projects, as well as the responsibilities of his cousin's three younger sisters, and young widow. Especially since Kathleen, the widow, is stubborn and irritating... and intriguing. She's in mourning, but she can't deny the attraction between them.

Devon. I loved Devon. He is introduced as a renowned rake who doesn't want the burden of the properties, the ancient estate, and so many tenants. At first, he's quite sure that he is going to sell everything. It would be awful for the tenants, who would have to move, as well as for the three young sisters and the widow of his cousin, but turning the condition of the estate around seems impossible. Yet Devon decides to keep the estate, and begins to have renovations done. Devon isn't just a sexy, charming rake. He's thoughtful and kind, and he is hilarious. He is compassionate (although you wouldn't think so, in the beginning), and he's mischievous.

Kathleen really is annoying, but I liked her. She feels like she should always get her way, but not necessarily in a spoiled manner. She's misguided in some ways, and she's very set in her ways. She is strict about mourning and wearing black and not having guests over and so on, and it's really annoying, but you can't fault her for trying to be proper, right? She bothered me at times, but at the same time, she was very headstrong and kind and clever.

The banter between these two was perfect! A lot of their interactions are witty banter, arguments, passionate encounters, mostly in irritation or anger or amusement, but it's all really funny. At one point, Kathleen despairs over them never having a conversation that doesn't end in an argument. I personally loved how they interacted (although I took Devon's side of Kathleen's mostly). I love the barbs, the jabs, the parries. The two of them are great together!

There is chemistry from the start, and the physical nature of their relationship slowly builds, it's all very gradual. While the book isn't filled with lots of steamy encounters, there is so much tension and chemistry, and when the steamy scenes do happen, they are quite, well, steamy! This book was definitely much steamier than the contemporary I read (Brown-Eyed Girl).

I loved watching Devon grow from a rake to an established earl, but still retaining his charming, mischievous ways. His brother, Weston, also grows tremendously; he was also a rake, but now he helps his brother with the farming affairs and tenants. The three sisters have an important presence in this book, especially the oldest, Helen. The next book in the series is about Helen and a man we meet in this book - I am so curious to see how that story will pan out.

Overall, I was so very pleased with this novel. My dislike is something I've already mentioned (connecting with Kathleen), and I think most people won't have the small issue I had with her. So, overall, a much better experience than that of Brown-Eyed Girl, for me!

I didn't connect with Kathleen as well as I'd hope - I think her rules for herself and others were very stifling. She also got on my nerves a little with her stubborn, high-handed attitude. I think she was used to having things a certain way. The thing is, she had no right to any of the properties or the running of the estate, etc. She never did, not even when she was married to Theo. So her meddling is just that - meddling - and it bothered me to see her all up in EVERYTHING like it was hers. Woman, know your place. You own nothing in the estate. You are basically a freeloading non-relative!

So she got on my nerves at times. She wasn't all that bad though, and sometimes I found myself really enjoying her inner monologue. She's not all bad, just annoying at times! I think it's a general Kleypas thing, to be honest.

I would totally recommend this novel to historical romance fans. It's probably a favorite of the year, which surprised me, given how little I liked my first Kleypas read, Brown-Eyed Girl. If you're a historical romance reader, you don't want to miss this one. Filled with charm and humor and so, so many feels, this novel was sure to deliver a fulfilling story!

4.5 stars -> rounded down to 4 stars. I'm not 100% sold on Kathleen, but I really enjoyed this book. I can't wait to read more about Helen and her fancy Welshman! That story should be interesting, given how things were with him at the end of the book.