Welcome to the blog tour for Fathomless by Anne M. Pillsworth (Tor Teen, October 27, 2015). This is the second book in the Redemption's Heir series, sequel to Summoned. I've not read these books, but I am very excited to help promote the new publication. Check out my interview with Anne, and enter to win Fathomless below!

Alyssa:  Hi, Anne! Thank you so much for joining me today!

Anne:  Hey, Alyssa!  I'm glad to have the opportunity to talk to you at the ominously named Eater of Books.  I have gnawed a few page corners myself.  Paper aged to a mellow umber has a lovely vanilla-like flavor, doesn't it?

Anne:  The waters off Innsmouth run deep, and first-year magic student Sean is sinking into them.

Alyssa:  Tell us about the mythos and the occult in this series, and how you came up with your spin.

Anne:  What's generally called the Cthulhu (k-THOOL-oo) Mythos grew out of the dark fantasy of H. P. Lovecraft.  The basic idea is that Earth was colonized by many alien races before man.  Reallyalien races, like the octopus-headed and dragon-winged Cthulhu spawn, the Mi-Go or "Fungi" from Yuggoth, and the time-travelling Yith, wearers of many bodies.  Some of these guys are still hanging around, in dark corners; others lurk in adjacent dimensions, hankering to return and raise hell.  Most alien and potent of all are the Outer Gods, who seem to control all creation -- indeed, who created it to begin with.

I deal mostly with Nyarlathotep (neye-yar-LA-tho-tep), the Soul and Messenger of the Outer Gods.  He has countless avatars, including the Dark Pharaoh who appears in my books.  According to my take on the mythos, Nyarlathotep is also Master of Magic, hence the ultimate source of power for magicians of every species. To ally with the Master, however, has its costs, which my hero Sean Wyndham may not be able to avoid.

My spin is based on the notion that Lovecraft was a member of the Order of Alhazred, which deals with occult threats to humanity. Lovecraft, alas, liked to whisper the secrets of the Order under the guise of fiction, and so was rather unpopular with the other members.  Long after his death, the Order has grown into a world-wide organization.  In addition to its watchdog duties, it trains young magicians, like Sean and his friend Daniel.  The world is dangerous for fledgling wizards.  Not only does the Master of Magic hunger for their service, they must contend with monstrous Servitors and other uncanny familiars, and there are always cultists and the protoplasmic shoggoths to beware of, not to mention the odd transdimensional rift.

Alyssa:  Do you categorize these books as paranormal, or fantasy, or a mixture of both?

Anne:  Genre definitions are elastic, but I see paranormal as dealing with more "Earthly" supernaturals, like vampires and werewolves, fae-folk and mythological creatures of all cultures.  So I'd say fantasy, um, dark or weird fantasy, um, science-fantasy. Yeah, definitely fantasy.

Alyssa:  How many books are in the series...more to come?  If you could have any number of books in this series, how many would you like to write?

Anne:  I'm working on the third book and have two more in mind, so a total of five on deck.  However, my plot bunny hutch is bursting with possible spin-offs, including an origin novel for the series "villain," set in late 17th century Massachusetts.  You know, the good old witching days!

Alyssa:  On that line of thought -- is there anything new you're working on?

Anne:  In addition to the third REDEMPTION'S HEIR book, I've started another series, which I'd classify as small-scale epic fantasy.  Meaning it focuses tightly on one character in an "epic" setting, rather than the usual many.

Alyssa:  And that's it from me! Congratulations on the new publication, Anne!

Anne:  Thanks, Alyssa!  Here's to much happy book-munching in all our futures! 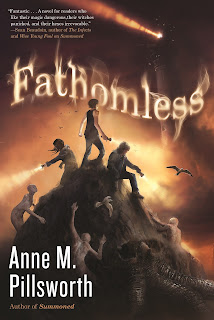 Sean dips even further into his magical destiny, but will blood prove thicker than the mysteries of Innsmouth's briny depths?

Sean Wyndham has tried to stay away from the lure of magic—the last time he tried to dabble in the dark studies, he inadvertently summoned a blood familiar, wreaking havoc on his town, and calling the attention of the Elder Gods. But now Sean has been offered the chance to study magic with a proper teacher, overseen by Helen Arkwright, a friend of Sean’s father and heir to ancient order of much power, who protects New England from that which lurks in the coastline’s unseen depths. But will learning theory be enough, when there is a much greater magical secret hidden in Helen’s vaulted library?

Accompanied by his best friend, Eddy, and their enigmatic new friend Daniel, Sean wades out deeper into mystical legend and shadow. With hints and secrets buried long in family lore, they turn to the suspicious Reverend Orne once more for assistance. But as Sean deepens his understanding of his power, a darkness is waking...