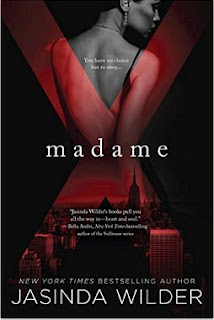 My name is Madame X.
I’m the best at what I do.
And you’d do well to follow my rules...

Hired to transform the uncultured, inept sons of the wealthy and powerful into decisive, confident men, Madame X is a master of the art of control. With a single glance she can cut you down to nothing, or make you feel like a king.

But there is only one man who can claim her body—and her soul.

Undone time and again by his exquisite dominance, X craves and fears his desire in equal measure. And while she longs for a different path, X has never known anything or anyone else—until now...

I liked this book! Just not as much as I'd expected. There were several big things that I didn't like, but for the most part, I enjoyed the story. I will DEFINITELY be reading the sequel, and the book after that. I like Jasinda Wilder and I am trusting her!

Madame X has no recollection of who she used to be, six years ago. She has amnesia, and Caleb Indigo took her in six years ago after she was badly and nearly mortally hurt. Now, she works for him as a mentor of a sort, teaching millionaire heirs to act powerful and confident. But she is a glorified prize - never allowed to leave her apartment, a plaything of Caleb's. She isn't an escort, and Caleb is the only one that ever touches her, but she has no choice whether or not she wants to have sex with him, whether or not she wants to teach her clients how to be proper businessmen, and so on. Caleb owns her, and she is his. Until she wants more.

I feel so, so bad for Madame X. She has no memory of anything. She's about twenty-five years old, and she's a gorgeous Spanish beauty. But she doesn't know anything about herself, or the outside world. She's a prisoner in her condo, with expensive dresses and lingerie. Caleb visits her and gets one thing from her every time he comes - sex. It's infuriating because she doesn't want to want him, but physically, her body wants him. Mentally and emotionally, she feels trapped and used, and hates how he comes to her.

So X is powerless, yet so powerful. Her job is to turn men into confident businessmen, instead of the immature, snobby people that they are when they are brought to her. There is a strict no-sex or touching clause in the contract - Caleb doesn't want anyone touching X except himself. X has no concept of the outside world, and she only knows obedience to Caleb. She is completely brainwashed, naive.

So I felt bad for her. It's hard not to, given how brainwashed she is. She can't escape Caleb, but it's almost like she doesn't want to, because he is all she has ever known (that she remembers). It's when she is taken outside to a party that she begins to question her life, as well as Caleb.

And we learn some things about Caleb, and what he is doing. Caleb is an awful human being and I cannot feel a shred of like or respect towards him. I'm not sure if the author wants to humanize him? But I think he is a monster.We don't learn anything about X's past, but I'm sure that will be to come in the following books.

So this book is all about X starting to questions things. It's kind of a short book, and not a lot happens, really. X meets a guy when she is taken outside for the first time in forever (to a charity function/party). This guy, Logan, changes a lot of things for X. We'll be seeing more of him in the series.

There is hot, hot scenes in this book, but I hate Caleb, so I wasn't feeling it. In terms of romance, I'm sure we'll see more of the romance in the next books, but this book didn't really feature romance. Hot, steamy scenes, but not really romance. How does X REALLY feel about Caleb? He has sex with her at will, like she's an object, but that isn't romance, obviously.

Overall, I liked the book, and I definitely need to read the next book. I'm kind of mad that it's a trilogy because I want to see certain people suffer like, RIGHT NOW.

I hate Caleb. I hate everything about him. I hate everything he does. I hate how he uses X, how he uses her body, how he treats her. I hate his business. I hate his lies, how he tells X that she is special. I hate how X falls under his spell time after time. I hate that she can't help but be physically turned on by him, because he is a monster (she hates it too, to be fair). Caleb is a turn-off and how X is treated is the reason why this book is receiving three stars. Yes, I think the author wanted it to be this way, and put X through all of that for a reason. But. That doesn't mean that I have to like it.

So, this book is NOT for every romance reader. It's not a romance novel (yet?). Yes, there are hot sex scenes. But Caleb hurts X and commands her like a puppeteer, he uses her like she's a prostitute (but exclusive to him), and I hate it. I half-wish I hadn't read this book because I really, really hate how X is treated. But I like Jasinda Wilder, so I decided to give this book a shot. I still trust Jasinda but... the fact that this is part of a series really isn't help. All that waiting?!


I want Caleb to burn somewhere tortuously scalding hot. I want to erase X's hurt and pain, and I kind of want to punch her because she could have made better decisions at the end of the book?! Ugh! I hate series sometimes, where is book two!

Also - this book is written in second person. It's weird! I'm not sure I like it. I don't think it worked for me.

I'm going with "no" for now, simply because this novel isn't a romance novel, and it isn't a standalone. I'd recommend possibly waiting to see how the series turns out, because things could go south really quickly. This book isn't for everyone; it isn't a light romance read. It's hot, but it's the wrong guy that having sex, so it feels wrong to think that this book is hot. So... for now, no, I can't recommend this novel.

2.5 stars -> rounded up to 3 stars. Like I said, I trust Jasinda, and I'll be looking out for book two in the coming months. BUT. I think this book isn't necessarily for me. I'm too hooked not to read the second book, and I think I liked this one, but it wasn't what I expected.