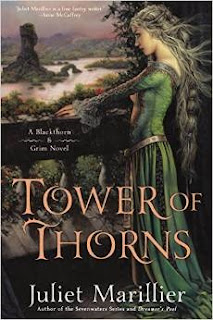 Disillusioned healer Blackthorn and her companion, Grim, have settled in Dalriada to wait out the seven years of Blackthorn’s bond to her fey mentor, hoping to avoid any dire challenges. But trouble has a way of seeking out Blackthorn and Grim.

Lady Geiléis, a noblewoman from the northern border, has asked for the prince of Dalriada’s help in expelling a howling creature from an old tower on her land—one surrounded by an impenetrable hedge of thorns. Casting a blight over the entire district, and impossible to drive out by ordinary means, it threatens both the safety and the sanity of all who live nearby. With no ready solutions to offer, the prince consults Blackthorn and Grim.

As Blackthorn and Grim begin to put the pieces of this puzzle together, it’s apparent that a powerful adversary is working behind the scenes. Their quest is about to become a life and death struggle—a conflict in which even the closest of friends can find themselves on opposite sides.

WOW. This book was really great. It took me by surprise, to be honest. Rarely is one book in a series just as good as another book in the series. I LOVED Dreamer's Pool, and it would appear that I loved Tower of Thorns as well!

In this sequel, Blackthorn and Grim set out to court, to attend Lady Flidais during her pregnancy. The prince is holding court while the king is away. While they are at court, a noblewoman arrives and pleads for help; a monster in the tower near her properties has been disturbing the land for nearly two years, wailing and screaming in the tower. The sound is unbearable, and Lady Geleis wants Blackthorn to rid the tower of the monster. Blackthorn and Grim begin to uncover secrets and truths about the holdings, the tower, and Lady Geleis. Something strange is afoot, and it could cost them their lives.

The first thing I'd like to say that I liked is that this book could probably be read as a standalone companion novel, which is pretty cool. I'd recommend you read Dreamer's Pool before reading this one, but I don't think it's actually necessary. This story is so different and separate from book one, and also, the author does a really good job of reintroducing information from book one that is important to know.

This story was so enchanting and haunting and eerie and intriguing! It's almost like a Sleeping Beauty tale, or Rapunzel. A woman has to go to the tower and slay the monster, ridding the village of the curse. Err, maybe not Sleeping Beauty, but some sort of fairy tale. Towers aren't new to fantasy or fairy tales, nor are thorns surrounding the tower, or fey, or curses.

The fantasy of this book is so rich and incredible. Marillier has the world-building down to a science! I love how descriptive her writing is, without making the novel boring or stagnant. You get a clear sense of where the characters are, what the woods look like, what the tower looks like. There are fey at work, creepy haunted forest, isolated tower, and secrets secrets secrets.

Blackthorn is her usual direct, astute, intelligent self, and Grim is his usual gruff, quiet, observant self. They are a great team, one catching the other's mistakes, or calming the other's moods, or just being there. Their relationship is very platonic, and it's nice how well they get along, knowing each other in and out.

Then there is Lady Geleis, who is the noblewoman in distress. We get to read from Blackthorn's perspective, Grim's perspective... and Geleis's. So we know that she knows more than she is telling Blackthorn. We know that she is hiding things deliberately. And we find out her secrets before Blackthorn does. I like how the author shares small bits of information bit by bit through Geleis's perspective. It keeps the reader guessing, and it makes us feel for Geleis.

There is another new secondary character in this story - Flannan, an old friend of Blackthorn's. His appearance is quite sudden and coincidental. Blackthorn is happy to see him, though he stirs up memories of her husband and child. Flannan is a good friend, an ambitious scholar, and not all that he seems, either.

Trust me when I say that this story will have you guessing and guessing incorrectly, mind you. It's almost creepy, in an eerie sense. I got chills at times, and not because the temperature just dropped drastically in the last few days (but seriously, this weather though). Marillier did such a great job with constructing the mood of this story!

Another interesting and heartbreaking and amazing thing she included in this story was more details on Grim's backstory and past, and how he struggles with PTSD in this story. I don't want to give away any details, but basically, parts of his past appear in this story in an indirect way, and he suffers greatly from PTSD. My heart broke for him every time my experienced a flashback or got physically ill or something of that nature! Yet it really shows how well Marillier dug into PTSD.

This story was different from the story of Dreamer's Pool, yet just as engrossing and fascinating. It has such a fairy tale vibe to it, but a really dark fairy tale, with a good ending. The ending is highly satisfying, people! And it makes you want another book, but not in a cliffhanger sense. More like a I-want-to-experience-more-from-this-world type of feeling!

Hmm, nothing in particular. This book is long? Didn't bother me, but just an FYI for those who don't like long books. It's a bit dense too, but once you're hooked, you'll not be able to stop reading!

I love fantasy and I loved Dreamer's Pool and clearly I loved this book too, so I must recommend this book (and series). If you like fantasy, especially adult fiction type of fantasy, this is your book. It's not Young Adult at all, very adult fiction, but not in a blood/gore/sex/explicit content kind of way. It's dense, but it's a great read!

5 stars. This rating is very rare from me - I don't find many books that I can call a "favorite" or THAT GOOD. But this book is that good! It's even rarer that a novel and its sequel will get back-to-back five-star ratings from me. So... that's an indicator of SOMETHING, right?! Go forth and experience this series!