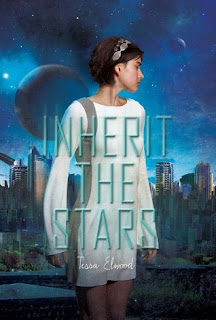 Three royal houses ruling three interplanetary systems are on the brink of collapse, and they must either ally together or tear each other apart in order for their people to survive.

Asa is the youngest daughter of the house of Fane, which has been fighting a devastating food and energy crisis for far too long. She thinks she can save her family’s livelihood by posing as her oldest sister in an arranged marriage with Eagle, the heir to the throne of the house of Westlet. The appearance of her mother, a traitor who defected to the house of Galton, adds fuel to the fire, while Asa also tries to save her sister Wren's life . . . possibly from the hands of their own father.

But as Asa and Eagle forge a genuine bond, will secrets from the past and the urgent needs of their people in the present keep them divided?

Author Tessa Elwood's debut series is an epic romance at heart, set against a mine field of political machinations, space adventure, and deep-seeded family loyalties.

This book wasn't nearly as bad as I thought it would be, given all the really harsh and negative reviews on Goodreads. At the same time, I didn't love the book, and could see a lot of the issues people had with the book. Also, a fair number of those negative reviews were DNFs, so there's that. I finished the book (it was short!), and I didn't think it was too bad.

Asa is the third Daughter of Fane, daughter of one of three powerful royal houses in the interplanetary system. Her oldest sister, Wren, is in a coma and doesn't show signs of waking up. The middle sister, Emmie, is set to be married to the Heir of another House - but only when Wren dies. Asa refuses to give up hope on Wren, and steps in, pretending to be Emmie, without anyone knowing. She gets married to Eagle, and then everyone finds out. Asa has no idea just how badly she has messed up things - the fragile alliance, blood binds, family ties... and when the ruler of the third house, Galton, shows up with secrets that will destroy everything Asa has tried to fix, Asa and Eagle will race to save their Houses.

I absolutely hated Asa at first. She hijacks her sister's wedding in order to save her oldest sister (their father would have pulled the plug on Wren, so that Emmie was the official Heir of House Fane). Asa made Emmie promise that she would look after Wren and keep her alive. Asa is so impulsive and selfish in the beginning of the book, but eventually, I got used to her, as well as I started to see her actions differently. Still, her personality and actions in the beginning of the book were the biggest reason why this book didn't get more than three stars.

Eagle, on the other hand, is one of my recent favorite male protagonists. Like, I haven't read a male protagonist in YA recently that I adored. He's silent and brooding and all of those things - but for a reason. Half of his face is badly scarred after a mission of some sort. Eagle does what he can for his House, including his duty of marrying the Fane Heir (who turns out not to be the Fane Heir). But he doesn't want any more than that. Eagle and Asa have to fool the public into thinking that they're totally in love, and Eagle goes along with this plot, but it breaks my heart to see how he feels manipulated and used by everyone.

The romance is pretty important in this book, which I've seen people complain about, as well as enjoy. I personally enjoyed it. Asa and Eagle fall for each other, but it's at this slow-burn rate, not necessarily fireworks and rockets. More like a meteor shower, something silently beautiful. The romance is pretty important, as both Asa and Eagle have to make choices eventually, and who they love and trust will dictate these choices. Still, the romance isn't overwhelming. And no love triangle, that's a plus!

I liked the setting - this book is very science-fiction-y, in a Star Wars kind of way. Lots of planet hopping and spaceship flying. There are issues with contamination, planet-wide hunger, disease, new means of medical practices and fuel. All cool stuff! I'm not sure how really science-y the science is, but I enjoyed reading about it.

This book ended very oddly - one big secret is dropped on everyone, and the ending is a bit of a cliffhanger (hence what I mean when I say "odd"). We know that this book is part of a series, so I understand why the author ended this book with a cliffhanger. The ending isn't bad, but I would dread waiting to read the next book!

I will agree with many reviewers on Goodreads on the point that it was difficult to connect with Asa. In the beginning of the book, she is way too rash and impulsive to like. She also does a lot of wallowing in self-pity. "Woe is me, I've ruined the alliance, the universe.", "What have I done?", etc. She doesn't think things through, only thinks selfishly about her oldest sister, and not about the entire planetary system, or House Fane. I know that sounds awful, but it's that whole "is one life worth millions" thing. Also, Asa's attitude just sucked. I wouldn't want to be her sister or friend. Chances are, I'd have already closed her mouth for her permanently (sorry not sorry). She doesn't think things through! Why is this so prevalent in YA literature?!

But she gets better as the book goes on. By the end, I liked her more (HATE one of her decisions, but at least some of them were okay, at the end). She's a difficult person to root for, to like. Many people DNF'd before getting even halfway through, because of Asa. I can see why. I hated (HATED) her for almost or about half the book.

The ending is kind of stupid. The cliffhanger is stupid. I don't see the point of the cliffhanger. Go to effin war, idiot. You didn't want to sacrifice your ONE sister for millions of lives, but you are more than willing to sacrifice yourself for millions of lives? I don't really call this selfless - maybe hypocritical and inconsistent. Again, difficult girl to like.

I did like Eagle though. And the romance. So I forgave Asa for a lot.

I don't think I'd necessarily recommend this book. I personally only downloaded it from NetGalley because one week, literally EVERYONE was downloading it from NetGalley, and it's science fiction, so why not? It's not a particularly memorable read, but I liked what I read. I highly doubt I'll be continuing with the series though.

3 stars. Like I said before, I most likely will not be continuing with the series. It doesn't seem worth it to me at the moment - although if the next book drops from the sky in front of me, I may read it. I do LOVE the romance in this book... but somehow, the romance never stays as lovely in subsequent books as it does in the first book. ESPECIALLY with how this book ended! I've said enough.