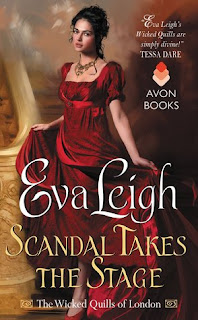 Successful playwright Maggie Delamere has no interest in the flirtations of noblemen like Cameron, Viscount Marwood. She once paid dearly for a moment of weakness . . . and vows to rebuff the wildly persistent—and irritatingly handsome—scoundrel at every turn. But when pressure to deliver a new play hampers her creativity, an invitation to use his country estate as a writer’s retreat is too tempting to resist...

For years, Cam has admired Maggie’s brilliant work, and he can’t pass up the opportunity to discover if the beautiful, mysterious playwright is as passionate and clever as the words that flow from her quill. He’s never offered a lady his bed without being in it, but if it means loosening Maggie’s pen—and her inhibitions—he’ll do exactly that.

But soon Cam’s plans for seduction become a fight for Maggie’s heart. He’s more than the scandalous, carefree rake society believes him to be . . . and she’s the only woman who has ever noticed.

Sadly, I was disappointed by this book. I'm not going to sugarcoat my feelings about this one. I just read Forever Your Earl, and liked it. It was smart, hot, and enjoyable. Modern yet totally historical, with a strong female lead and a naughty male lead. A great combination! This book had the same structure, but it felt off, and fell flat.

Maggie doesn't trust the aristocracy. Years ago, a nobleman ruined her life. She is now a successful, notorious writer of burlettas, and doesn't need any aristocrat in her life. But Lord Marwood, Cam, has taken interest in her. When she is in dire need of a favor, he bails her out of a bad situation, and doesn't want anything in return. As Cam and Maggie get to know each other with every encounter, they start to fall for each other. But Maggie can't trust him - can she?

I really liked Lord Marwood. Cameron Chalton, Lord Marwood, is a rake and a scoundrel who likes to party hard and entice women and avoid marriage. He makes no secret of his behavior, but his father hates that his heir is shirking his duty to the family and the name, by not getting married and having heirs. Cam is such an intelligent man, a lover of plays and the theater. But as a nobleman, he can't write his own plays or anything like that. Cam is naughty and wicked, yet thoughtful and clever. He's smarter than people give him credit, and he's a good guy. Easily the best part of this book.

Moving on, shall we?

Unfortunately, Cam by himself is not the contents of this book, nor is the rest of the book up to his awesomeness. I wasn't the biggest fan of Maggie, the plot was boring, the romance was boring, the chemistry/steaminess of this book was slow and lacking, and something felt like it was missing.

Maggie - she's a strong woman, capable and determined, independent and cautious. In Forever Your Earl, we are introduced to her - she's Eleanor's best friend. She does not like aristocrats, so she is really rude to Cam in the beginning of the story. It's not even witty banter or cold sexy arguments. She's just rude. She apologizes eventually, which was good.

I just didn't really connect with Maggie. She felt like a flat character, even with her tragic backstory, even with how much Cam seemed to be fascinated by her. She's a playwright, and at the moment, she is struggling to write the sequel to her big success. That's how Cam did her a favor - he became a patron of the Imperial theater, so that she could continue writing while he paid for fees of the theater. I think I wasn't feeling an emotional connection to Maggie. Perhaps she was TOO detached.

The romance was very VERY detached. It seems like Cam is fascinated by her for no reason. She sees her and literally, time stops, stars fall from the sky, and so on. But there is nothing remarkable about her, not even her appearance. Yet he can't stop thinking about her. This bothered me, because it seemed like there was no sexual tension in their first encounter, no intellectual stimulation, nothing telling me that there is attraction of some sort flowing.

So, the relationship and romance fell flat for me. The chemistry was lacking, too. The first kiss is nearly halfway through the book, and the one sex scene is about three-fourths into the book. That, to me, is NOT okay, not in a historical romance novel. In any adult romance novel, there needs to be some serious sexual tension for like, a fourth of the book, and then something physical needs to be happening around a third of the way in? The first sex scene shouldn't be nearly at the end! And there shouldn't be only one?! Right? There are no rules to these things, but these are things I've come to expect in adult romance novels.

The romance was lacking, the chemistry was lacking, the female protagonist was meh. The story was also very meh. It seemed aimless, and solely romance-driven. Sure, there is the problem of Maggie's play needing to be written by a certain time. But the plot seemed lackluster, especially compared to that of Forever Your Earl. There was something missing, a layer of something.

Overall, I was bored, and unimpressed. Mostly bored. Cam is awesome, but him alone is not enough for me to recommend this book to anyone.

My last sentence sums it up. I wouldn't recommend this one. The first book was great, but this one was not. I've read better historical romance novels, and can totally recommend you others!

1.5 stars -> rounded up to 2 stars. That might be generosity, at this point. I was very excited to read this book, before starting it! Unfortunately, I was disappointed. I *might* read the third book - a vicar and a writer of sexy stories? What an intriguing pair!