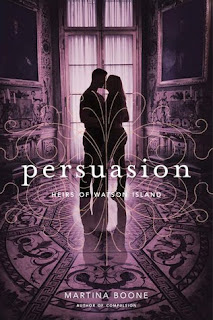 Grieving the death of her godfather and haunted by her cousin Cassie’s betrayal, Barrie returns from a trip to San Francisco to find the Watson plantation under siege. Ghost-hunters hope to glimpse the ancient spirit who sets the river on fire each night, and reporters chase rumors of a stolen shipment of Civil War gold that may be hidden at Colesworth Place. The chaos turns dangerous as Cassie hires a team of archeologists to excavate beneath the mansion ruins. Because more is buried there than treasure.

A stranger filled with magic arrives at Watson’s Landing claiming that the key to the Watson and Beaufort gifts—and the Colesworth curse—also lies beneath the mansion. With a mix of threats and promises, the man convinces Barrie and Cassie to cast a spell there at midnight. But what he conjures may have deadly consequences.

While Barrie struggles to make sense of the escalating peril and her growing and forbidden feelings for Eight Beaufort, it’s impossible to know whom to trust and what to fight for—Eight or herself. Millions of dollars and the fate of the founding families is at stake. Now Barrie must choose between what she feels deep in her heart and what will keep Watson’s Landing safe in this stunning addition to a series filled with “decadent settings, mysterious magic, and family histories rife with debauchery” (Kirkus Reviews, on Compulsion).

Another heavily disappointing novel. Yesterday's review (Scandal Takes the Stage by Eva Leigh) was not impressive, and this book was unfortunately similar in disappointment. It's awkward because I'm a member of Martina's private street team, and I love Martina! I just met her on Saturday (at the Baltimore Book Festival), and she was the sweetest. I love working with her, so I'm extremely disappointed that I didn't like this novel. More mad at myself than the book, I think!

Barrie is still recovering from the crushing grief over Mark's death, as well as the trauma from what her cousin Cassie did to her and Eight. Back at Watson's Landing, Barrie discovers a new magic, through a stranger who doesn't seem human. He wants her to find something that will break the Colesworth curse, or he'll take away her ability. Find it and he'll grant a favor. But Barrie must sneak around behind everyone's back, include Eight's. Will she risk it all, including losing Eight, in order to save everyone?

I'm sitting here completely still, trying to dredge up things that I liked about this book. The cover, for one, though that's completely out of the author's control. The author's handling of PTSD, in one of the secondary characters. I was not expecting PTSD in this particular character, nor did I expect the trauma that the character suffered. The author did an excellent job of setting up this shocking secret. It's not a big secret the changes the plot of the book or series, but it is quite important and is a big part of the climax.

I'm also a huge fan of my cameo in this book! There is an "Alyssa" in this book, specifically because myself and Alyssa H. are part of Martina's street team. Very cool!

I'll try to keep this as short as possible, because I know I have a tendency to go on and on, and I don't want to say too many specific things. Things with which I had issues: Barrie & Eight's relationship, Barrie, the story.

Barrie are and Eight fighting literally from the beginning of the story. And then they're kissing all the time. And then back to arguing. It's exhausting. I was sick of their s*** by the end of the first few chapters. Barrie develops a complex in which she feels the need to push Eight away, and then Seven wants her to stay away from Eight too. And yet, Barrie will be arguing with Eight, and in the next page, they'll be kissing.

To me, there is nothing romantic about this. It was a total turn-off, to go from arguing to kissing to arguing and then to kissing. Barrie and Eight's relationship is so messed up. Barrie is hiding just about everything in her life from him. When she meets the weird stranger who seems to be able to disappear into the air, she lies and tells Eight that it's nothing. Everything is "nothing" to Barrie - she doesn't trust anyone.

And she is incredibly selfish, and hypocritical. She expects everyone to be totally up-front and honest with her, and yet, she lies to EVERYONE. Not just Eight - Pru, Seven, herself. Her lies hurt people. Her lies are selfish. She lies and then makes decisions for people without asking or at least telling them. So many lies in this book, especially to Eight. And Eight knows when she is lying (he can tell if she is trying to hide what she wants from him), yet he doesn't want to give up on her.

See, their relationship is so imbalanced. I felt like Eight was saying a lot of "I can't stay mad at you" and "gosh what you do to me" and "you are amazing", "my life is nothing without you", etc. The usual cliche, melodramatic BS (sorry not sorry). Meanwhile, Barrie is lying and sneaking around and being hypocritical and yelling at Eight at every turn. And still expects him to forgive her. This relationship is so one-sided! Eight is the one making all the effort, and Barrie is doing a great of taking advantage of him, whether or not she realizes it (she does).

Not to mention that Barrie makes some ridiculous, dumb decisions. With some of her decisions, if she didn't make a few of them, there would be no book. But... all of her decisions are so incredibly stupid. She's supposed to be smart? It didn't show at any point in this book, unfortunately.

Basically, I had a ton of issues with Barrie, Barrie and Eight's relationship, and all things related to Barrie. Difficult dislike to have, no?

The story was also boring, disjointed, and very anticlimactic. I can't say much without giving away spoilers, but I was highly disappointed in how the plot moved, as well as the climax. The climax was not nearly as epic and interesting as I'd expected. NOTHING is resolved, especially in terms of history. So disappointing!

Bottom line - Barrie and Eight's relationship was too toxic for me to actually enjoy this story. Eight is so one-dimensional (perhaps it was hard for the author to construct the characters in third person limited?), and Barrie is hard to like (in this book). While I think the author is trying to show character development in Barrie, she has turned Barrie into a highly unlikable character, and it reflects badly on the plot.

This is tricky. While I clearly didn't love this novel, I think I might still read Illusion (book three) next year. The ending of this book was good, so I might give book three a chance. So, I don't recommend Persuasion, but I liked Compulsion, and I am curious enough to want to read the next book in the series.

2.5 stars -> rounded down to 2 stars. I am disappointed that I did not like this novel, but glad that I read it. It's unfortunate that so much of the story was just character/relationship drive, and the plot story outside of the romance is in poor shape. If you've read this novel, let me know what you thought of it!