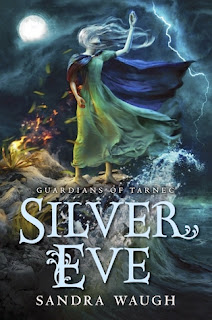 A Healer without home or purpose, seventeen-year-old Evie Carew has found the perfect place to disappear: Rood Marsh. She can easily fade into its vast wilderness of towering reeds; leave behind the growing violence that is claiming her innocent world. Leave behind the tragedy that broke her heart and sent her far from her grandmother, cousin Lark and all she once loved.

But Evie is not alone in the marsh. A seer, a Rider, and Breeders of Chaos all hunt her—for though opposed in objective, her seekers share knowledge she does not: Evie is one of the four Guardians of Tarnec, one who can help save the world from the coming destruction if she can reclaim the stolen amulet of Death. But whether she meets true love or a brutal end on such a journey is a matter of who finds her first.

The publicity letter accompanying this review copy mentioned that this book was for fans of Juliet Marillier and Kristin Cashore - two extremely popular ladies in fantasy. Cashore is my favorite author, and author of my favorite book ever (Fire). I've only read one of Marillier's books (Dreamer's Pool), and I loved it. But my point to all of this - usually I dislike lofty comparisons, but I think this comparison really worked. If you've read anything written by Cashore or Marillier, there is a VERY good chance that you'll enjoy this fantasy series.

Evie Carew, Healer and the cousin of Lark (protagonist of Lark Rising) has been wandering, not sure of what she seeks, healing people from different villages as she goes. A seer gives her a cryptic prophecy, and then she is rescued by a Rider after she successfully weaves a disastrous spell. Breeders of Chaos are after her. She and Laurent must find the amulet of Death - and protect it - before everyone she loves perishes and the Balance is forever lost.

In Lark Rising, we meet Lark, the Guardian of Life. Evie is her cousin, and she finds out that she is the Guardian of Death. While Lark is slightly more timid, Evie is more outspoken, more vocal about her curiosities. Evie is also heartbroken at the end of Lark Rising, as the boy she loved died. But in death, her one connection to Laurent was formed - he was the one that killed the Troth that killed Raif. I like how complex Evie is; in the beginning, she is definitely lost and aimless. By the end, she is driven, by loyalty and love, protectiveness and a sense of rightness. There is a sadness in Evie, something that doesn't just disappear. Yet she still fights on, in her own way.

Laurent is so dreamy! Like Gharain, he is a Rider, and a Guardian's Complement. He is stubborn and loyal, always protective of Evie, but cognizant of when to leave her. Evie is a Healer, and often insists that she need not know how to kill (or to kill anyone), but Laurent is always there for her, and not just for protection. He is so patient and and fierce, but he has such a calm disposition. I really like Laurent! He is an amazing Complement, Rider, friend, and then some.

At first this book seems a bit aimless (like Evie) - Evie doesn't even know that she is a Guardian. She left home shortly after Lark showed up at the end of Lark Rising, heartbroken over Raif. What kicks this story into gear is a prophecy, a spell, and the appearance of Laurent. Never a dull moment in this book! Sandra Waugh takes us through many different locations, in search of the amulet, as well as the twists that occur after the amulet is located. I fear for so many characters!

Which leads me to the ending - this book ended in a surprising way! It is VERY clear that this series really is not a companion series any more. I think the author is writing each of the four books from the perspective of each of the Guardians (Life, Death, Light, and Dark), so the next book will be written in the perspective of the Guardian of Light or the Guardian of Darkness. The ending is a cliffhanger for sure! It's bittersweet, yet a good "hook" ending. I already wanted to read the next two books, but after that ending, yes indeed!

Romance - the romance was just as sweet as Lark and Gharain's romance in Lark Rising! I think I liked Lark and Gharain more, but then, not much is getting close to that book, for me. It was nice to see Evie move past Raif's death. Also, her and Laurent are a sweet couple. The romance is slow-burn and tender, not demonstrative but very swoony. No love triangle, also. Romance is never a central part of these books in the series, yet the romance is one of my favorite parts. Love!

I can't say there was anything I specifically didn't like. Perhaps the ending - it is quite the cliffhanger! I hate cliffhanger endings. But I know there are two more novels in this series, and I know Waugh would not steer us wrong, so I'm trusting her.

I loved this book, though you'll notice my rating isn't as perfect as that of Lark Rising's. Honestly, Lark Rising was so SO good, and not much is touching that one. It was a favorite of 2014. So this book getting a lower star isn't because it was "worse" - it's because Lark Rising was THAT good. If that makes sense!

I would highly recommend this sequel, as well as the series in general. Definitely a favorite series, and I must agree with the comparisons of "for fans of Marillier, Cashore". I love Kristin Cashore and Juliet Marillier, and we can definitely put Sandra Waugh's name in there too. If you love fantasy (of the high/epic variety), definitely give this series a chance!

4 stars. Gorgeous book, gorgeous story! I need more from the Guardians of Tarnec series. And I am so anxious to see who the next Guardian is! A year could not pass soon enough!