Welcome to the release day blast for The Legend of Lyon Redmond, book eleven of the Pennroyal Green series! I've only read It Started With A Scandal, but I absolutely LOVED the book, and I have the rest of the series waiting to be read. I can't wait to continue with more books! Check out more about this new publication, and enter to win fabulous prizes! 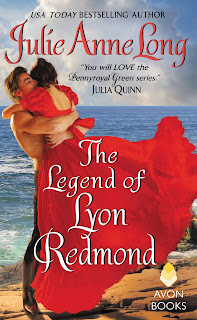 Bound by centuries of bad blood, England’s two most powerful families maintain a veneer of civility...until the heir to the staggering Redmond fortune disappears, reviving rumors of an ancient curse: a Redmond and an Eversea are destined to fall disastrously in love once per generation.

Rumor has it she broke Lyon Redmond’s heart. But while many a man has since wooed the dazzling Olivia Eversea, none has ever won her—which is why jaws drop when she suddenly accepts a viscount’s proposal. Now London waits with bated breath for the wedding of a decade…and wagers on the return of an heir.

It was instant and irresistible, forbidden...and unforgettable. And Lyon—now a driven, dangerous, infinitely devastating man—decides it’s time for a reckoning. As the day of her wedding races toward them, Lyon and Olivia will decide whether their love is a curse destined to tear their families apart...or the stuff of which legends are made. 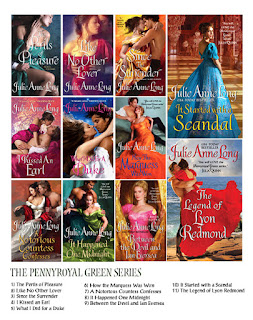 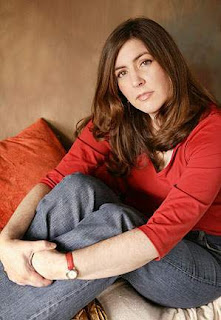 Julie Anne Long originally set out to be a rock star when she grew up, and she has the guitars and the questionable wardrobe stuffed in the back of her closet to prove it. When playing to indifferent crowds at midnight in dank clubs lost its, ahem, charm, she realized she could incorporate all of the best things about being in a band—namely, drama, passion and men with unruly hair—into novels, while at the same time indulging her love of history and research. So she made the move from guitar to keyboard (the computer variety) and embarked on a considerably more civilized, if not much more peaceful, career as a novelist.

Julie lives in the San Francisco Bay Area with a fat orange cat. (Little known fact: they issue you a cat the minute you become a romance novelist.)

She was the last of the Eversea children to be married, and she was going to be the wife of a viscount. Her brothers had all married unusual women, not one of whom possessed a title. Genevieve had married a duke—to the quietly gleeful satisfaction of her father, for they had trumped the Redmonds, who acquired a mere earl by marriage—but she and Falconbridge had wed by special license. Olivia was the family’s last chance for pomp.

And she knew everyone who loved her would exhale only when she was waving merrily good-bye from Landsdowne’s carriage as they went off on their wedding journey.

No one had said as much, of course.

And this was the unspoken source of all the tension.

They had nothing to worry about. Olivia was definitely going to marry him.

The betting books at White’s, of course, had it otherwise.

God, but she was infinitely weary of being a sport for the wager-happy wastrels at White’s. She did not want to be an event.

But if she’d learned anything over the years, wanting something and getting it were not always sequential events. Even for Everseas.

She pressed her head back against the plump seat, which smelled vaguely and soothingly of her father’s tobacco, then gave a start and fished about in her reticule.

“Blast!” Only two shillings were in there, along with her hussif, her tortoiseshell card case, and, of course, a square of linen folded in sixteenths that she always pretended not to see but that traveled with her everywhere.

It had become a personal ritual, her way of tithing, to say a few kind words and drop a few coins into the cups of the beggars who had appeared weeks ago and lingered near Madame Marceau’s shop, and who reappeared no matter how often Madame Marceau tried to shoo them away. They were as intrepid as ants. They knew where to find sustenance, and that was from the affluent women who frequented the modiste.

But Olivia, as usual, always wished she had more to give.

At last “Madame Marceau, Modiste,” a gaudy sign gilded swinging on chains, came into view, Olivia sat up alertly. The Strand was even livelier than usual today, apparently: she could hear a choir, of all things.

She didn’t know the tune, but it was certainly infectious, lilting and lively. Her foot was already tapping before the footman pulled open the door of the carriage, and she was smiling when he handed her down.

A half-dozen men were arrayed before Madame Marceau’s, arms slung about each other, swaying rhythmically, their heads tipped back in full-throated song. Another man seemed to be presiding as a conductor, strutting to and fro before them and holding a sheaf of papers in one hand.

He waved one in the air. “Get yer flash ballad here! Two pence! Be the first to teach your friends the song all of London will be singing for centuries to come!”

This was quite a claim, given that one of London’s other favorite songs was all about Olivia’s brother Colin, and it, like Colin, who had survived the gallows, refused to die.

Years of distributing and accepting pamphlets for the causes nearest her heart—the eradication of slavery and the protection of the poor—had Olivia reflexively stretching out her hand for it.

The man hesitated, then saw the outstretched hand was encased in an expensive blue kid glove and decided to let her hold it.

“Two pence, madame, if ye’d like to take it with you.” He beamed persuasively at her.

She didn’t hear him.

She was transfixed in horror by the first words on the page.