Review: His Lover To Protect by Katee Robert 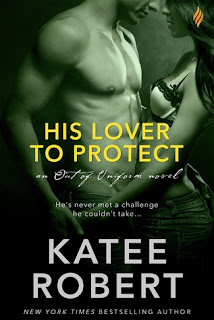 His Lover To Protect by Katee Robert
Book Three of the Out of Uniform series
Publisher: Brazen
Publication Date: September 7, 2015
Rating: 4 stars
Source: eARC from NetGalley

Alexis Yeung did everything right....only to watch everything go horribly, horribly wrong. Broken and angry, Alexis high-tails it to Europe, determined to face the world on her own terms and without consequence. Which includes a mind-blowing night with a sexy, scarred stranger.

Except, embittered former pararescuer Luke Jackson isn't exactly a stranger. He's supposed to keep an eye on Alexis without her knowing. Ending up in bed together was definitely not the plan. Now he's chasing her (admittedly hot) ass across Europe, a game of cat and mouse that always ends with the two of them tangled up in the sheets.

Something in their scarred, damaged souls calls to each other. And God help them, the sex in unbelievably hot. But if Alexis discovers who Luke really is, he'll lose the one thing that makes him feel whole...

It's no secret that Katee Robert is one of my favorite romance authors. The Marriage Contract is my favorite of hers, but I LOVE her novels with Brazen. This book was pretty great! I read book one of this series (In Bed With Mr. Wrong), and liked it. I haven't gotten the chance to read book two, but I'm glad and so happy to have had the chance to review book three!

Alexis is running from her demons, taking a long vacation in Europe. She's running away from everything that isn't good in her life. Her family is very worried about her, and her brother-in-law has Luke Jackson tail her (without her knowing). Luke is a fellow pararescuer, so he will help out his friend by following Alexis, making sure she's safe. But Luke and Alexis end up colliding, sharing steamy nights together... without Alexis knowing who he really is. Alexis will have to find out eventually - will it be worth it?

Both Alexis and Luke are both such scarred characters - mostly emotionally, but also physically. Being in the military has a lot of risk associated with it, and Luke was badly injured while serving. He has a limp in one of his legs, and he is very scarred there. Alexis's scars are less physical, but she carries around with her a lot of guilty, remorse, despair. Something was taken from her that she couldn't bear to lose.

I love how Robert dug deep with these two characters. A lot of times, romance novels (like many Brazen novels) have great developed characters, but the complexity isn't on this level that Robert has displayed in this book. You can feel the agony and the pain that Alexis felt, that Luke felt. Both of them have reason to shut down, run away, forget about the world. They argue and fight initially, but they are perfect for each other, in so many ways.

The chemistry between these two is scorching! The very first steamy scene is off the charts hawt. If there is one thing that you are guaranteed in Robert's books, it is excellent chemistry between the starring couple. And a nicely developed romance too! I love good chemistry, but also, a strong romance and healthy pair.

Diversity! I love the diversity of this book. Robert is good at sprinkling diversity in her books, and I love that in this book, she chose to make a protagonist Asian. I am a fan!

I had a bit of trouble with Alexis (see below), but for the most part, I loved this book! It's very short, but very steamy, and very angst-filled (not overwhelmingly so though), and very hopeful. You'll love Alexis and Luke's journey across Europe, the two of them discovering each other in various ways, and the climax - the big issue and how it is resolved. There is a nice ending to this story!

I struggled with Alexis, initially. I understand her issues, and I think I know how she felt. But she is such a coward! Running away from her family, so many people who were worried about her, all the way to another continent? It's just so immature! But to be fair, Alexis does grow throughout the story, and doesn't remain cowardly for the entire book.

The dynamic seemed weird to me - Luke knowing exactly who she was the whole time, Alexis having no idea. It's almost creepy, someone following you, even if he is a family friend, sent by family. The dynamic of this book just seemed weird because of that. You have to get past it!

I would recommend ANY of Katee Robert's books! Especially her O'Malley series. Especially her Brazen books. Basically anything she has written. This one is no exception! It's not my favorite of hers, but I liked it a lot. Romance readers, you will enjoy this quick and dirty (hehe) novel by Robert!

3.5 stars -> rounded up to 4 stars. I wonder if Robert has more Out of Uniform books up her sleeve? I loooove a man in uniform. Or out of his uniform. That's fine too. Gimmee more books!