Review: What A Wallflower Wants by Maya Rodale 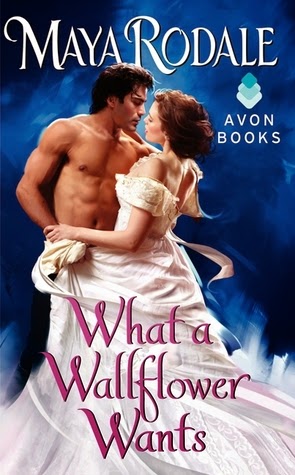 In the third novel in Maya Rodale's charming Wallflower series, London's Least Likely to Be Caught in a Compromising Position finds temptation in a devilishly handsome stranger . . .

Everyone knows that she's the only graduate from her finishing school to remain unwed on her fourth season—but no one knows why. With her romantic illusions shattered after being compromised against her will, Prudence accepts a proposal even though her betrothed is not exactly a knight in shining armor. When he cowardly pushes her out of their stagecoach to divert a highwayman, she vows never to trust another man again.

He's a blue-eyed charmer with a mysterious past and ambitious plans for his future—that do not include a wife. When he finds himself stranded at a country inn with a captivating young woman, a delicate dance of seduction ensues. He knows he should keep his distance. And he definitely shouldn't start falling in love with her.

When Prudence's dark past comes back to haunt her, John must protect her—even though he risks revealing his own secrets that could destroy his future.

Second thing - it's been a while since I've read/reviewed a historical romance novel, hasn't it? July 27th was the last day that I reviewed one. I have this one and another one releasing in September, but I just got both of them, so I can't read/review them a month in advance, like I usually do (I'm in the middle of the October releases, if you hadn't noticed). But, I'm squeezing in this one because I love Rodale's books, and this one turned out to be quite awesome!

Prudence is the last of the wallflowers to shirk her awful nickname and "title" of wallflower. Emma and Olivia are married to wonderful men, and the finishing school's ball is coming up. Prudence needs to marry, otherwise she will look like a fool and a failure. When she is stranded in an inn one night, a stranger decides to pay for her stay. John Roark is a handsome, titled stranger, and Prudence has caught his eye. But both of them have terrible secrets - are either of them ready for the other?

I read book one of this series - Emma's story - and really enjoyed this one. For some reason, I totally missed out on book two, and skipped it. This one is my favorite though. Prudence is so different from your typical husband-hunting girl in season. Something awful happened to her, and while we know what it is that happened, the actual even itself is revealed slowly to readers.

Prudence has a lot of spirit and backbone - I really liked her. She isn't a ninny at all, she isn't weak, she isn't stupid. She's really funny to read about, but she's also made of iron, because she is so incredibly strong and hard-willed. Something awful happened to her, but throughout the story, she learns to hold her head high and not let it define her.

I thought John would be a total rogue, but he isn't! He's quite the gentleman... sort of. You'll have to read the book to know what I mean by that. John is seriously a good man, a nice person, clever and flirtatious, but also intuitive and understanding. Definitely a favorite historical romance hero.

I loved learning about these two characters' pasts. Prudence's secret is more obvious but more painful. My heart broke for her on so many occasions, especially as John was discovering them for himself. John's secret kind of took me by surprise - I didn't really expect that at all. Good old John... although, he isn't that old. *winks*

The romance starts as a attention-is-caught-quickly kind of thing, but the hero and heroine progressively fall in love. It's obvious that Rodale won't play any games with the romance in this book, which is a relief. We know that Prudence and John are meant for each other, but each of their secrets are like barriers. Nevertheless, I really liked the romance. It was sweet and well-developed, but also quite sizzling and steamy.

Overall, I really enjoyed this book! I'm kind of sad to see this series end, but it ended with the best book! I can't ask for much more than that.

I think I would have wanted to see more steamy scenes between John and Prudence. I understand, given the nature of certain things, that this might have proven difficult, but I feel like it would have added to Prudence's character development. In general, I wanted more physical interactions from those two. We get plenty of emotional/sentimental interactions though!

As far as historical romances go, yes! Sure! This one was different from most of the ones I've read, since both of the protagonists don't really seem to act all high-society-bred... and both of them are hiding BIG secrets. I liked this book so much!

4 stars. I hope Rodale has a new series coming out soon! I do enjoy her historical romance novels.