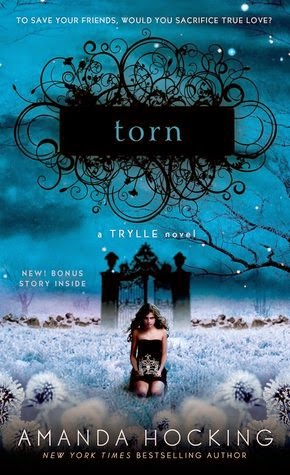 When Wendy Everly first discovers the truth about herself—that she’s a changeling switched at birth—she knows her life will never be the same. Now she’s about to learn that there’s more to the story…

She shares a closer connection to her Vittra rivals than she ever imagined—and they’ll stop at nothing to lure her to their side. With the threat of war looming, her only hope of saving the Trylle is to master her magical powers—and marry an equally powerful royal. But that means walking away from Finn, her handsome bodyguard who’s strictly off limits…and Loki, a Vittra prince with whom she shares a growing attraction.

Torn between her heart and her people, between love and duty, Wendy must decide her fate. If she makes the wrong choice, she could lose everything, and everybody, she’s ever wanted…in both worlds.

Ahhh, this book was good. I so enjoyed it. I liked the first book, Switched, but this book is exactly what a sequel should be like, exactly how the second of a three-book trilogy should function. So much more makes sense, and I feel like so much more has been solidified.

Wendy runs away from her mother's palace in Minnesota, and goes back home to Matt and Maggie... with Rhys. Only to be captured by the Vittra, putting herself, Rhys, and Matt in danger. She meets Loki, the Vittra prince, who isn't who she thought he would be. He lets them escape, then gets caught by Elora, but never tries to capture Wendy. The King of the Vittra needs Wendy, but so does the Queen of the Trylle... Torn really is the perfect title for this book, on so many levels.

I think I like Wendy a lot more in this book. Not that I didn't completely like her in book one, but I understand her more in this book, and really feel for her. A sense of duty rules her life, and takes away many choices. Wendy is kind and sometimes selfless, and she has a certain humanity to her that the Trylle and the Vittra don't have.

I said above that this book function perfectly as a sequel novel, book two of three. Book one was all about Wendy and who she is. This book introduced the big picture, the huge problem that the Vittra pose, and why the Vittra want her so badly. Wendy is taken to the Vittra stronghold, and I think this is perfect and totally necessary. It's great to see both sides of the troll feud. Now we know what is at stake for both the Trylle and the Vittra.

Honestly, I don't see one side or the other as the "good" side or the "bad" side. I think they are both equally not ideal, and I wouldn't want to be involved in either kingdom, but duty rules the life of a Princess, so I understand. Both sides of the feud are justified, and both have their pros and cons.

Okay, okay. The romance. I thought the romance was a little confusing, in book one. We have Finn, Wendy's tracker and bodyguard. Wendy is totally fixated on him, when everything starts to change in book one, and she learns what she - and he - is. Then there is Tove, the Trylle Markis who seems to be a nice match for a Princess, at least from a political perspective. Sometimes, I thought Rhys was a possibility too.

Well. Rhys is more like a brother to Wendy. Finn broke Wendy's heart - but the thing is, to me, Finn seemed like that infatuation that you have when you dive head-first into a new world. Tove... well, something huge is revealed about to Tove, so I'm not worried about that. So who does that leave? Why, Loki, of course! I'm a HUGE fan of Loki. I really hope the romance stays solid in his direction, because he and Wendy are really great for each other, at least in terms of political situation, personality, and values. Plus, they're totally attracted to one another. So.

That being said, I'm not entirely sure why everyone was so up in arms about Loki being introduced as a love interest. I mean, I was never feeling Finn to begin with - he's like that whirlwind love interest that doesn't quite stick. Tove always seemed like a friend, and Rhys, a brother. I think Loki and Wendy really connect. But that's just me.

I feel like there is going to be a massive mess of crazy battles in book three. The big showdown, in terms of Trylle versus Vittra, should be fun! I hope. I'm pretty excited about book three! Especially for the romance. Team Loki!

I think I wanted a little more depth from this story. YES, it does a great job of setting up the big picture. There are lots of crazy things going on, like curses and death and weird procreation problems and things. But it seemed a bit cliche? Maybe something even more mind-blowing and creative. On the surface, the conflicts are good though, they make a great story.

And I want more about TROLLS. I feel like the troll thing is glossed over a lot. I almost forget that Wendy and everyone are trolls - they might as well be human! The only thing that is constantly reminded is the aversion to most foods. But the Vittra/Trylle feud might as well be two different races of the same species... and that species could be homo sapiens. The troll thing could be a bit more prevalent, you know?

At this point, sure! I'm really enjoying the story, and the romance. It's more of a detached interest, since I'm binging the series, but I'm invested enough to keep going, you know? I'm rooting for Wendy! And Loki. Mostly Loki.

4 stars. Be on the lookout for my review of Ascend, book three, to be posted on September 25th! At this point, I have three books to read before I get to that one... I can't wait!