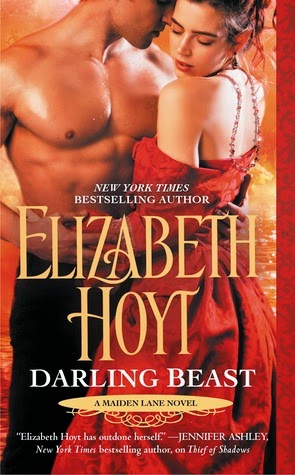 Falsely accused of murder and mute from a near-fatal beating, Apollo Greaves, Viscount Kilbourne has escaped from Bedlam. With the Crown's soldiers at his heels, he finds refuge in the ruins of a pleasure garden, toiling as a simple gardener. But when a vivacious young woman moves in, he's quickly driven to distraction . . .

London's premier actress, Lily Stump, is down on her luck when she's forced to move into a scorched theatre with her maid and small son. But she and her tiny family aren't the only inhabitants—a silent, hulking beast of a man also calls the charred ruins home. Yet when she catches him reading her plays, Lily realizes there's more to this man than meets the eye.

OUT OF ASH, DESIRE FLARES

Though scorching passion draws them together, Apollo knows that Lily is keeping secrets. When his past catches up with him, he's forced to make a choice: his love for Lily . . . or the explosive truth that will set him free.

Ohhh, guys, it's been over a year since I've read an Elizabeth Hoyt book! Her Maiden Lane series is my favorite historical romance series EVER, so you can imagine how antsy I was to get my hands on this one. THANK YOU, GRAND CENTRAL!!

Apollo Greaves has just escaped Bedlam, with the help of his sister and his new brother-in-law, the Duke of Wakefield. Apollo is currently redesigning the garden in the ruined Harte's Folly when Lily Stump moves into the theater with her seven-year-old son and nursemaid, Maude. Lily is a well-known actress of London, but she hasn't had much success recently. When the two meet, it's two worlds colliding, worlds of secrets, worlds of danger, worlds of sparks...

We all know my favorite book of the series was Duke of Midnight, and that still sticks, but this one is probably tied with the remaining five books for my number two favorite. I could not wait to dive into Apollo's story, and to a relatively new character's story! Lily was an interesting character, and I was intrigued by the story of her having a seven-year-old son.

Apollo is on the run from Bedlam, and Lily needs a place to stay. Set in the lush background of a horribly burned theater and garden, most of the interactions between Lily and Apollo occur there, in the garden. Lots of time for the author to show off Apollo's physical prowess. Lots of time for Indio (Lily's son) to become beholden to Apollo, a potential father-figure that he never had.

I really liked Lily - she isn't a noblewoman, so she has no title or rank. She's a successful but struggling actress that is desperately trying to hide her son from society's keen eye. Lily has a spine of steel, but she is also very soft and gentle. Caring for Apollo comes naturally to her - after she gets past her initial suspicion and wariness.

Apollo... ah, poor guy. He cannot speak for a good portion of the book, because of injuries sustained at Bedlam. You really have to feel for the guy - it was heartbreaking to read about his interactions with everyone else, via pen/paper or gestures. However, I think the inability to speak made him a very astute and observant person - if he wasn't already. I really like Apollo!

The romance is very sweet. Lily and Apollo fall in love so seamlessly, despite Lily not knowing much about Apollo - she doesn't find out that he is a viscount, or that he is on the run for (alleged) murder, until close to the end of the book. Imagine her surprise. Nevertheless, I found the romance sweet, not very steamy, but that was okay.

I like how story progressed in this book. We get to see many characters from previous book, like Maximus, Artemis, Hero, Phoebe, James... but we also meet new characters, like the Duke of Montgomery, who is quite the character. I had hoped that book nine would be about him, but I see that book nine features Asa. That's cool.  In any case, I also like how things wrap up - finding the real murderer of Apollo's friends is important, so that Apollo can have his name cleared, and so that he can take his place as Viscount Kilbourne. The ending is definitely a wonderful ending, in my opinion!

I can't think of anything specifically... I think I had hoped for more between Lily and Apollo? There are plenty of sentimental scenes, which deal with feelings and emotions and totally sweet gestures, But in terms of the physical, it's kind of all plopped in at the end, several scenes squeezed in just as the book finishes. Which is okay... but dispersing the steaminess would have been more effective? In my opinion. But this is much of a complaint, more like an observation.

YEESSS. So much. Read the entire Maiden Lane series, read book six, read this book, read them all. It's a companion series, so you don't quite have to read the previous six to read book seven, and so on. Elizabeth Hoyt is hands-down my favorite adult historical romance author - I just love her work!

4 stars. A lovely addition to this fabulous series! Book eight now... I cannot wait to read James and Phoebe's story! And ooo, book nine, Asa. Maybe Hoyt can get a contract for a book ten, featuring Montgomery!