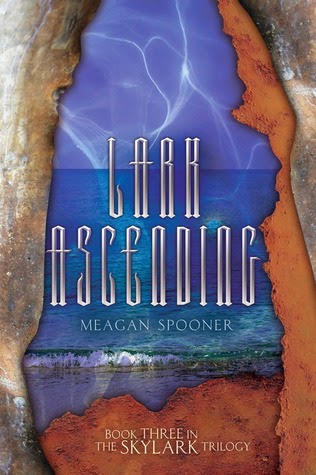 The thrilling conclusion to the Skylark Trilogy: Revolution is brewing in the city within the Wall. After months beyond the Wall, Lark returns with Owen by her side, prepared to overthrow the Institute once and for all. But Lark's triumphant homecoming is short-lived when another leader emerges to unite the rebels: Eve, a mysterious Renewable. Lark wonders if Eve's powers will bring them strength or bring humanity's final downfall.

THIS. This was the book I needed from this series. I struggled a little with books one and two - I liked them, but I wasn't totally interested. In my review of Skylark, I mentioned that I liked the book overall, but was confused about things. In my review of Shadowlark, I was still confused about things, and wanted more from the sequel novel. While I totally do NOT remember most of what happened in books one or two (it's vague, just enough for me not to be hopelessly lost), I can say confidently that this book, Lark Ascending, made the most sense in the series. It sucks that we have to come this far to see this, But, I'm glad I stuck with this series!

Lark is going home - she is returning to her city, to see if what is wrong can be righted. She finds the rebels of the city (half of the city is controlled by rebels, the other half controlled by the Institute/architects), some familiar face, and a newcomer... a Renewable named Eve, who was a slave to the Institute not too long ago. Lark doesn't trust Eve completely, especially since everyone seems to be under her thrall. Eve is powerful - but will she help the rebels, or will take matters into her own hands?

Spooner attacks so many issues in this book, unlike the previous books. Maybe the previous books were setting up for this one. In any case, Spooner addresses many problems: Lark's light/dark powers, Oren's shadow side, Eve's enormous power as a Renewable, the Institute and its real goals, the truth behind the "apocalyptic" event in history that destroyed everything... so many truths are revealed in this book. It's incredible how everything seems to come together. FINALLY.

I understand Lark's abilities so much more. I understand the "shadow" side of Oren, and I really *get* Eve and her powers. Everything makes sense in this final novel, which is good, because I had soooo many questions after finishing book one and then finishing book two. My questions were answered, rest assured.

A word of caution (sort of): I remembered very little from book one to book two, and then book two to book three. Remember, I didn't LOVE the first two books, so after I finished them, they didn't really stick with me. But I found that it was really easy to get back into this world, despite not remembering much. This is always a good thing!

Lark definitely grew even more, in this novel. She had to take charge of several matters, even though someone else was handling the rebels and plans, even though she never really wanted to put herself or anyone in danger. I have to say, I do like Lark, and I get her.

The romance is a bit rocky in this book, but not in a bad way. It goes to show that Lark and Oren don't have it all figured out, they aren't super similar and perfect, and they go through obstacles like anyone else. In general, I'm very pleased with the romance. I was confused in the first book, but I ended up really liking the romance in this series.

I'm glad I kept reading! This series is certainly an interesting one. The world-building and intriguing concepts drew me in, but the poor structure of the first two books didn't really do the series any favors. The last book (this one) made me glad that I read the series!

I almost wish for a more bloody ending... I know that sounds weird, but I don't think anyone actually died. You know how usually a friend or mentor or several people who matter but aren't the protagonists die? I'm not going to say that the ending was perfect (it was NOT), but then, in terms of death and whatnot, no one died... just saying. That stuck out to me.

In general, the overall feel of meh that I got from books one and two stuck with me as I was reading this one, but it was less oppressive than it was in books one and two. That's a good sign.

If you've read Skylark, or Skylark and Shadowlark, definitely make a point to read this book. It's totally worth your while to read the conclusion to this unique series. However, if you haven't read either book, then ehhh, don't bother. I wouldn't have read this series if I hadn't won a copy of book one from the author. I was under no obligation to read/review the book, but I like to make sure that my giveaway winnings don't just stack up and collect dust, you know?

4 stars. Definitely a fantastic ending to a series that needed a push. This book was that push. I'm glad I read these books! Now I can say I've read all five of Spooner's books/soon-to-be-published books (Skylark, Shadowlark, Lark Ascending, These Broken Stars, This Shattered World)!