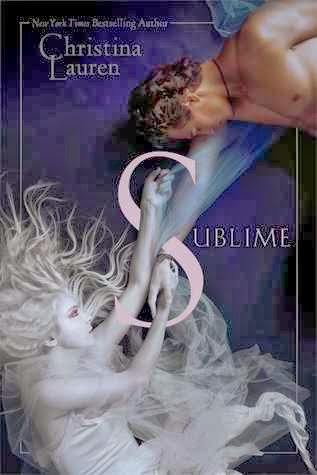 When Lucy walks out of a frozen forest, wearing only a silk dress and sandals, she isn’t sure how she got there. But when she sees Colin, she knows for sure that she’s here for him.

Colin has never been captivated by a girl the way he is by Lucy. With each passing day their lives intertwine, and even as Lucy begins to remember more of her life—and her death—neither of them is willing to give up what they have, no matter how impossible it is. And when Colin finds a way to physically be with Lucy, taking himself to the brink of death where his reality and Lucy’s overlap, the joy of being together for those brief stolen moments drowns out everything in the outside world. But some lines weren't meant to be crossed…

Here we go with the Pretty Cover Syndrome. Although, this cover is more haunting and ethereal, than really pretty. The positions of the two people on the cover are really cliche, but the people themselves are rather interesting. Nevertheless, I feel for the cover syndrome, and paid for it.

Lucy is dead, but she doesn't know it until later in the book. She just wakes up one day, walks to the boarding school that is nearby, and starts attending. Colin sees her for HER, unlike most of the students, who don't really see her until they really stare at her. Colin and Lucy fall in love. They're totally drawn to each other. So why is Lucy here? Is she haunting the school? Is she waiting for Colin? Who was she when she was alive? How did she die? Nothing seems to make sense, but nothing seems to matter when Colin and Lucy are together. But they may pay for the measures they take to be together...

One thing that I liked was how captivating this story was (or seemed to be). I wanted to know more, I wanted to find out what was going on, I wanted my questions to be answered. The authors really had me going, because I just could not figure out this book, as I was reading! Problem was, I couldn't figure it out after I finished the book. So.

The romance is very steamy and very evocative and slow-burn and I love the physical nature of Colin and Lucy's relationship. On the emotional side, it was all insta-love/insta-lust, so the feelings were kind of supposed to be just THERE... but I like how sizzling the relationship was.

Moving on to the next section!

My biggest problem: while I LOVED not being able to figure out what was going on in the book (while reading), I finished the book and looked around, like, that's it? None of my questions were answered! I'm so confused! Literally EVERYTHING was left to my imagination! We have no idea why Lucy came back! We have no idea why it's Colin! One reason was given, but the authors made it seem like that wasn't the real reason. And then things happened with OTHER people like Lucy, and in the end, it contradicted everything that we knew to be true of Lucy and the other dead people. I. Don't. Understand. Anything.

Also the romance was very insta-love-y. While I mentioned that I love the physical nature of the relationship, I just could not understand how the two of them seemed to love each other that deeply from the start. Not typical teenage stuff... just saying.

I know this doesn't seem like a lot of dislikes, but the ending and the feeling of dissatisfaction left me with a bitter aftertaste - I wanted to know more, I didn't get more, and I'm not going to get more (this is totally a standalone novel, given the ending alone).

Naahhh. Great cover, successful authors (apparently; I wouldn't know, as this is my first novel of theirs that I have read), horrible story. Seriously, I spent the whole book wondering what was going on, which is okay while reading... but not okay once you reach the end of the book and things still aren't cleared up.

2 stars. Not a one-star-read because this one had me going for a while - I mean, I finished it really quickly, because I wanted to know what was going on. But not any higher than two stars because seriously, this book needs a negative rating from me. I just did NOT like it.