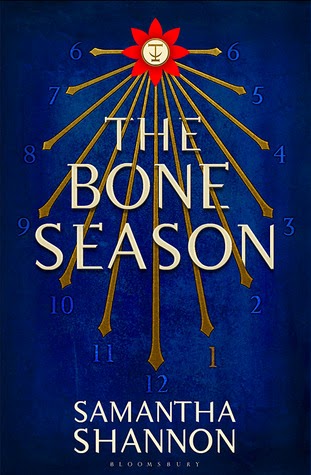 It is the year 2059. Several major world cities are under the control of a security force called Scion. Paige Mahoney works in the criminal underworld of Scion London, part of a secret cell known as the Seven Seals. The work she does is unusual: scouting for information by breaking into others’ minds. Paige is a dreamwalker, a rare kind of clairvoyant, and in this world, the voyants commit treason simply by breathing.

But when Paige is captured and arrested, she encounters a power more sinister even than Scion. The voyant prison is a separate city—Oxford, erased from the map two centuries ago and now controlled by a powerful, otherworldly race. These creatures, the Rephaim, value the voyants highly—as soldiers in their army.

Paige is assigned to a Rephaite keeper, Warden, who will be in charge of her care and training. He is her master. Her natural enemy. But if she wants to regain her freedom, Paige will have to learn something of his mind and his own mysterious motives.

The Bone Season introduces a compelling heroine—a young woman learning to harness her powers in a world where everything has been taken from her. It also introduces an extraordinary young writer, with huge ambition and a teeming imagination. Samantha Shannon has created a bold new reality in this riveting debut.

First, I'd like to thank Pili at In Love with Handmade for pushing this one - it's my Pili-Pushed book for September. I wanted to read this one anyway (ended up with an ARC and a paperback copy from the publisher), but I needed the extra nudge from Pili, for sure.

Wooaaahhhh, I can see what all the fuss is about. To be completely honest, I waited this long to read this one because it was soooo hyped up. It still is. But when I got an ARC of this one last year, I was like, meh, because everyone was saying that this would be the next Harry Potter series, or something. Which turned me off, because DON'T MESS WITH HARRY POTTER. Those books were legend. Nothing can compare to them, NOTHING. *end rant*

Anyway, comparisons aside, I totally understand the love for this book. It was pretty EPIC. It's an adult fiction novel, so it's rather dense, compared to YA novels, but not as dense as some adult novels are. It's in-between, kind of. I rather like this. I saw some complaints about this, on both extremes, but honestly, I liked that this book was more complex and rich and dense than YA books, but not as dense and whatnot as most adult books.

Paige Mahoney is a dreamwalker, a rare type of voyant. She is part of the syndicate of Jaxon (a mime lord)... until she gets caught by the NVD. She is taken to Oxford, outside of Scion London, where she is herded with other voyants, and some amaurotics (no voyant abilites). The Rephaim are herding the voyants, using them to fight the Emim. Neither the Rephaim nor the Emim are human. Nashira, the blood sovereign of the Rephaim, knows that Paige is special. Her blood-consort, Arcturus Mesarthim, takes Paige under his wing for training. The Rephaim are cruel and vicious and care not for humans, but Paige is determined to use her ability and find a way out of Oxford, and to take down Nashira.

I'll start with Paige. To begin with, I was totally judging her by her name - I HATE the name Paige. But whatever, it seems like Brits like that name, so it's cool. I really like Paige. I totally get her, understand her, and would get along with her just fine. She's not irrational or impulsive, but she is very blunt and direct and fiery. But again, not irrational or impulsive. The intelligent kind of feisty. Yup, she and I would get along.

Paige suffers greatly, in her past, but in the present. She is considered lucky to be under the tutelage of Arcturus Mesarthim, because he's super powerful and the blood-consort of Nashira and he NEVER takes humans to instruct... but Paige hates him. He doesn't treat her like a slave or less than dirt, which makes her very distrustful of him. At the same time, he is the blood-consort of Nashira, and is honing her abilities for Nashira's benefit. Or is he?

I like the intricacy of the story. You need to pay attention while reading this book, because there are many details and bits of information that are important. For example, Bone Season XVIII - super important, but if you don't pick up on it in the beginning, you'll have to go back a little and refresh your memory. Basically, pay attention. The author adds detail with much precision, it seems.

The fantasy aspect of this book is very interesting, I was impressed with the originality. We are dealing with voyants - Paige is a dreamwalker, so she can walk in the aether, fracture from her body into the aether... even possess other bodies and make them move as she would want them, and so on. There are more common voyants, like soothsayers or mediums, and cartomancers, oracles, etc. I love the interesting types of voyants that Shannon creates!

The world-building is pretty neat. Scion London (or SciLo) is a place of fear, especially for voyants. But Paige gets captured, and then we're in Oxford, and it's even more fear-ridden, in Oxford. Human voyants are brought into Oxford every ten years, as a Bone Season harvest type thing. This is Bone Season XX.

NO ONE TOLD ME THERE WAS ROMANCE. But rejoice, because there is! I knew it was coming... and oh, how sweet and fire-filled it was. I AM HAPPY. Kind of. The ending was a slap in the face, because it took the ENTIRE book for the romance to collide/physically manifest (if you know what I mean), and then... the ending... okay. I don't believe that will be the end of the romance. Nope nope nope, it can't be. I REFUSE TO BELIEVE THIS.

The ending... well, I know I haven't been waiting as long as some people, for book two, but um, NEEDZ BOOK TWO. This one came out in August 2013, and book two is coming out in January 2015... yeesh, I'm sorry, people. Only some months to go!

It definitely took me a while to really get into this book. I was a hundred pages in, and I wasn't bored, but I wasn't invested in the story. Then I was about two hundred pages in (about halfway), and was a little more invested, but still, ehh. Again, not bored, but not interested. But then things started getting good, and I was all like YES YES YES I AM FLIPPING PAGES LIKE NOBODY'S BUSINESS.

Hey fantasy fans... adult fiction fans... you'll like this one. Give it a shot! If you haven't already - I feel like one of the few bloggers who haven't read this one until now. Ha! But seriously, this one was pretty awesome. I'm almost sorry I waited so long to read this book. *Almost*, because I'd have to wait LONGER for book two if I had read this book back when I got an ARC, which was before book one's release date O_O

4 stars. Cool beans! Now can I haz book two? Because... that ending... certain things must be addressed. OR ELSE.