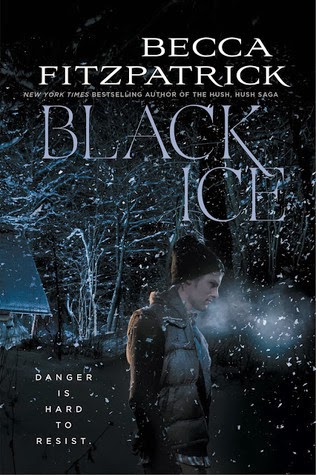 Sometimes danger is hard to see... until it’s too late.

Britt Pfeiffer has trained to backpack the Teton Range, but she isn't prepared when her ex-boyfriend, who still haunts her every thought, wants to join her. Before Britt can explore her feelings for Calvin, an unexpected blizzard forces her to seek shelter in a remote cabin, accepting the hospitality of its two very handsome occupants—but these men are fugitives, and they take her hostage.

In exchange for her life, Britt agrees to guide the men off the mountain. As they set off, Britt knows she must stay alive long enough for Calvin to find her. The task is made even more complicated when Britt finds chilling evidence of a series of murders that have taken place there... and in uncovering this, she may become the killer’s next target.

But nothing is as it seems in the mountains, and everyone is keeping secrets, including Mason, one of her kidnappers. His kindness is confusing Britt. Is he an enemy? Or an ally?

BLACK ICE is New York Times bestselling author Becca Fitzpatrick’s riveting romantic thriller set against the treacherous backdrop of the mountains of Wyoming. Falling in love should never be this dangerous…

I liked Hush, Hush, Fitzpatrick's debut novel, but I didn't really like the rest of the series. Crescendo was okay, but I didn't like the direction that Fitzpatrick took with the romance. Silence and Finale, meh. I didn't care for them. But I was so happy when I saw that Fitzpatrick was writing a new book (a couple of years ago). But then the release date was in 2014... and I was like, dang, two years and counting?! That's quite the wait. Well, it was worth the wait. This is Fitzpatrick's best novel, in my opinion.

Britt and her friend Korbie plan on backpacking the Teton Range, but unfortunately, her ex (whom which she is still in love) wants to join them. In a twist of events, Britt and Korbie get stranded in Britt's car, and have to abandon the car and gear to get out of the snowstorm. They stumble upon a cabin, housing two men (Shaun and Mason). Shaun holds the girls hostage, leaving Korbie injured in the cabin, but taking Britt with him and Mason to get off the mountain. While Shaun is insane, Mason is less sure about the hostage situation, and seems to want to help Britt. Nothing adds up in the mountains of Wyoming, but one thing Britt is sure of: she needs to escape.

The story begins in an interesting way. Britt and Calvin (her ex) are talking, and Britt invents a boyfriend so that she won't seem so pathetic in front of Calvin. She points to a guy getting gas. This guy happens to be Mason (the man who will assist Shaun in holding her and Korbie later). But no one knows this. Mason plays along, totally fooling Calvin. But as the story goes on, we see Mason as a kidnapper, someone almost cruel. Or is he?

Personally, I am a HUGE fan of Mason. I never got the bad-guy, kidnapper vibe from him. In fact, I got the why-are-you-two-here-you-will-get-hurt-by-Shaun-PLEASE-LEAVE vibe from him. He acts cruel to Britt and Korbie at first, because he recognizes that Shaun might hurt them. Mason has his own motives, and he isn't working in tandem with Shaun. He doesn't have the same goals as Shaun. He's not a terrible guy. He's a young man, college drop-out, who is looking for something.

Britt is different from Nora (from Hush, Hush). Honestly, I think Britt is very smart, even when she is terrified. Britt never stopped thinking, and never stopped trying. She was always suspicious of things, even if she never suspected the Big Reveal (climax). I could totally understand why she wouldn't. But I like her. She has depth, character, grit.

The romance is soooo beautiful, in my opinion. At first I was like, Stockholm Syndrome? I hate love stories that involve Stockholm Syndrome. But I didn't get that vibe here. Britt was intrigued by Mason from the first scene of the book, when he played along with her fake boyfriend scheme. Mason is hot and cold, but he has good intentions and a good heart. Also, he's kind of hot. Just saying. I shared a swoon from this book on Thursday, so you can that out.

There is NO love triangle. Calvin isn't really a factor in this case. You'll notice in my swoon post that the name "Jude" is used... I promise there is no love triangle. Just trust me. I won't spoil anything here, but I'll DM you if you really want to know.


I like that the author set the book up in which there are constant flashbacks from Britt's past with Calvin. Britt is SO in love with Calvin. He's Korbie's brother, and Britt has been in love with the older boy since they were kids. Then one day, he kind of just notices her, and they start dating. I never got the sense that Calvin was serious about her, that he cared about her as much as she cared about him. But dude, I totally understand her feelings and her loyalty to him. First love is the hardest to let go of, in my opinion.

The setting is gorgeous and punishing and harsh and awesome! Fitzpatrick did an excellent job of writing the setting and portraying the mountains of Wyoming. It almost makes me want to live near the mountains and snow. Almost. We get all four seasons in a healthy dose hear in Baltimore, so um, no. LOL.

The story itself is quite interesting. Britt is forced to lead Shaun and Mason to Idlewilde, but she has Calvin's map, so she leads them to another cabin with a watchman. There, she and Mason run away and leave Shaun. Things heat up between Mason and Britt, but then Britt must decide if she really trusts Mason... and she needs to find out who the bad guy is. Someone is killing women on the mountain, and it might not be Shaun.

The Big Reveal, as I like to call it, isn't super shocking (in my opinion). I thought it was pretty obvious, but I liked the setup and reasoning behind The Big Reveal and the perpetrator. I was also dying to know how Mason and Britt would get their happy ending (if they would at all). I won't share any details, but I'm satisfied with the ending!

Maybe it's just me but I expected more of a twisty story... a lot of things were based on luck. Like Britt taking Calvin's map. Or Britt getting forced into the storage room by Shaun, in which she same something suspicious... I don't know. I think I just wanted more mystery, but it seemed like the mystery was a bit obvious and a bit lucky. Still. Great novel.

4 stars. I'm quite pleased with this novel! I'm happy to have had a chance to read it. It's a wonderful standalone novel, and I can't wait to read Fitzpatrick's next standalone, Sapphire Skies!