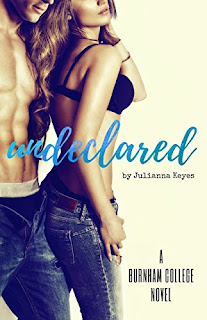 ***Warning: this is a New Adult book, and for the eyes of mature readers***

Kellan McVey is Burnham College’s most prolific athlete, partier, and ladies’ man—and that’s just how he likes it. Returning to reign for his third year, he wants nothing to change. Then Andrea Walsh shows up.

It wasn’t too long ago that Andi and Kellan were lifelong friends, mortal enemies, and, for one hot summer, more. Then Kellan left and Andi stayed behind.

Kellan thought he’d moved past that last summer’s heartbreak, but with Andi sitting next to him in class, befriending his friends, and battling for the same once-in-a-lifetime job opportunity, he’s starting to remember why he hated her…and why he loved her.

Kellan has a long list of reasons that falling for Andi again is a terrible idea, though every new moment together challenges that theory. But Andi’s all too familiar with Kellan’s love ’em and leave ’em approach—and she’s found someone else to get serious about.

Burnham’s campus king has never had to fight for a girl, but if he wants Andi to give him another chance, he’ll have to do the one thing he’s never had the nerve to do: admit it.

Undeclared was without doubt my most anticipated New Adult publication of 2017. I loved Undecided - so much it became my new favorite NA book - and I couldn't wait to read the follow-up. While I didn't love this book like I loved Undecided (would that even be possible?), I enjoyed it and definitely recommend it.

Undeclared is Kellan's story, and it starts at the end of summer, leading into the beginning of hir junior year. Before heading back to Burnham for the new academic year, Kellan seeks out his childhood and former hook-up, Andi. He and Andi did not part on good terms two summer ago, before Kellan left for Burnham and Andi stayed in Avilla. Years later, she is still angry with him. And as it would turn out, she is starting her first year at Burnham, with a volleyball scholarship. Kellan is notorious for his promiscuous behavior, but what everyone doesn't know is that he left Avilla two years ago with a broken heart, and wanted a fresh start from Andi. But now that they're back to being in the same space - and having the same friends too - Kellan and Andi can't ignore their brokenhearted past, or their unknown future.

Clearly this is a second-chance romance story, and I will be very upfront by saying that I do not usually like second-chance romances. It's because someone got burned a long time ago, and now here is the story of two hurt people (at least one, anyway) falling in love again... it's not always pretty, it's never fun, and I'm not here for that kind of story. However, I've read several of Keyes' adult novels, and one was a second-chance romance. I loved that book (Time Served). And I loved Undecided (which was not a second-chance romance, by the way), so there was no way I wasn't going to give this book a chance.

Both Kellan and Andi are hurt about what happened two summers ago (when the "broke up", Kellan went to Burnham, Andi stayed in Avilla). Andi has always openly loved Kellan, but Kellan could never force the words into his brain, let alone out of his mouth. Fast-forward to now - there is even more angst and heartbreak between the two of them. With Kellan's literal list of women he's hooked up with between him and Andi, and Andi being tired of waiting for Kellan, you know this story isn't going to be easy. And it wasn't. But... that's one of the things I liked about it.

This book is written in Kellan's point-of-view, which was awesome! Exclusively his first-person POV. I loved getting in his head, when it came to track, Andi, his promiscuous past, his friends. It broke my heart, experiencing his feelings whenever his sexcapades were brought into conversation by one idiot or anything, because you can tell how Kellan isn't proud of himself anymore. Kellan has matured so much, between Undecided and Undeclared, but also in Undeclared. He has so much more depth than what everyone expects (the jock playboy who will sleep with anyone). This book is about Kellan, and not just his romance with Andi. He matures and becomes a better guy, a better student, a better athlete, and a better person in general. I like Kellan 2.0.

I was surprised when I actually liked Andi, from the start. I thought I'd dislike her initially because she was the one that put the brakes on their "relationship" those summers ago, and honestly she was a little mean to him, when they first start interacting at Burnham. But then I put myself in her shoes... honestly, she was much nicer than I would have been. My petty butt would have been vicious.

Anyway, Andi was fine in the beginning and she grew on me even more. I didn't really like that she was interested in another guy at first (I like the romance linear), but I didn't mind because that ended up trickling out less than halfway, and she wasn't interested in him like she was in Kellan. Even though Andi wasn't one to play games, she was quite good at getting Kellan to notice her and want to seek her out. Andi is smart and also protective of her heart - and with good reason.

Watching the pair stumble along and find their way was hard, heartbreaking, but also sweet and sometimes steamy. They fight constantly in the beginning, and that leads to some other passionate encounters... they are great together. The romance is different because they both already loved each other - but they grew into those feelings, and that was fun and swoony to watch. They have to hash out and work through a lot of stuff, but it was worth the angst and occasional (small) drama.

No love triangle, no cheating, no surprise babies - it's all Kellan and Andi (though at first, like I said, it seems like Andi might be into someone else). I don't really like the diversion bit (Andi being interested in someone else) but it served a purpose. The romance is both bittersweet and swoony, steamy and passionate.

I loved how the male relationships are so important in this book. Crosbie, Dane, Choo, and several other male characters make a lot of appearances in this book, and they are so crucial to Kellan's story. They're a hilarious and solid support system for Kellan, whether he knows it or not. She's not a dude but Nora (Crosbie's girlfriend) is also frequently in this book, and I loved all of her and Crosbie's snippets. They are the cutest!

I've probably said enough! This book was great overall. I'm not a big fan of second-chance romance novels, but this one was good. I think Keyes did Kellan's story justice.

I didn't love this book like I loved Undecided (again, probably because of the second-chance romance aspect), but I liked it a lot and I don't think it disappointed at all. I definitely missed the funny back-and-forth banter of Crosbie and Nora's relationship, but Kellan and Andi's relationship had its own tone and quality to it, and for that, I can't fault the book. I do recommend this book if you've read Undecided. If you haven't read Undecided and are thinking about starting with this book (Undeclared)... don't - read Undecided (first). You won't regret it!

4 stars. A solid companion sequel and addition to the series. I liked this book and I adored Kellan even more than I already did. I think he really redeemed himself in this book, with Andi and in general. Take whatever you thought about him in Undecided and be prepared to take a closer look at this guy!