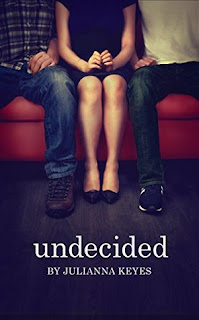 I rarely break out the five-star rating. It's my least-often-used rating of the five - I'm pretty sure I rate more book with one star, than five stars. And yet, I've rated two of the three Julianna Keyes books that I've with the elusive five stars. Time Served (five stars) and In Her Defense (four stars) are two excellent adult romance novels by Keyes, but Undecided, her first New Adult contemporary romance novel, is her best (in my opinion). I do not like New Adult (I've had terrible luck in the past with New Adult contemporary romance novels), but I think this is my favorite NA book ever!

JUST SO YOU KNOW -- there is NO love triangle in this book. When I first saw this book, I would have passed it straight, given the title and the cover. But I recognized the author's name, and decided to inquire about a potential love triangle. She assured me that not only is there NO love triangle in this book, but she isn't a fan of them. The title is has more to do with Nora's academics and social life balance, as well as her feelings for Crosbie (should they act on their feelings?). The cover DOES have two males, one on each side of Nora. One is Kellan, Nora's new roommate and new friend; the other is Crosbie, Kellan's best friend (and the guy whom Nora falls for). No love triangle! I promise!

Nora needs to be boring this year. Last year she partied too hard, failed half her classes, and lost half her scholarship, as a result. She's moving out of the dorms to save money, and guess who her roommate is going to be? Kellan McVey, a track-and-field star and player who is also trying to clean up his act. He offers her a semester free of rent (his parents pay the rent, anyway), and a quiet living space. Nora can't say no! But she doesn't expect to fall for Crosbie, Kellan's best friend and teammate, who is at the apartment often. Crosbie lives in a frat house, and he's almost as bad a player as Kellan. But there is a sweet and thoughtful and magnetic side to Crosbie that Nora doesn't expect. The two fall for each other; but Nora has skeletons in her closet, skeletons if Crosbie finds, things between them might be ruined irreparably.

Guys. GUYS. I don't like New Adult but this New Adult novel blew me away! For context - yes, I have read Jamie McGuire's Beautiful Disaster, Tammara Webber's Easy, J. Lynn's Wait For You (and many others by her), The Deal by Elle Kennedy (I liked this one!), and plenty of other NA books. Some were good, but most were repetitive stories (sorry!). This book was fresh and unique and so enjoyable!

Nora is a reformed party-girl college student. She is washing her hands of her partying ways, and she's going to live in the library from now on (not literally). I like Nora - she's headstrong and decisive, and she goes after her goals. She says she's done with boys and the way she had sex last year, but something about her new roommate's best friend attracts her. Nora comes across as nerdy and boring, but she's kind and intelligent and a wee bit sarcastic. One thing I like about all of Keyes' heroines - they are strong, independent ladies, and they know their mind.

This book is written exclusively in Nora's first-person POV, but I can't go through a review without talking about Crosbie. Oh Crosbie. He's not quite a player/manwhore like Kellan, but he's got a list of girls (Crosbabes). The thing is, he's such a nice guy. He's an athlete and a frat bro, but he isn't a douche or a***ole. He's nice to Nora, but he's also considerate and sweet and pretty great. He's more than a pretty face and rippling muscles (eight pack, I think? Muscled arms?). I have a crush on him for sure! Never thought I'd say that about a track runner. Crosbie is not a one-dimensional sexy dude - he felt like real people I know in college!

The banter between Nora and Crosbie is amazing! It is sarcasm-infused, as well as they joke around each other. Their humors line up really nicely so it's like they are always synced! Their interactions were always on point, even when they were disagreeing about something (which wasn't too often).

The romance between these two was both sweet and SUPER steamy. The emotional/"crush" part takes up about 50% of the novel, and it's so lovely to watch! Honestly one of my favorite aspects of reading a contemporary romance novel (across any age level - YA, NA, adult) is watching the characters fall in love. The physical part of the relationship in this book starts around the 50% mark, and holy guacamole those two. Nora and Crosbie sizzle and steam and burn together. This New Adult book is really hot - even for your average NA book. But it figures - Keyes' adult romance novels are INTENSELY steamy. Time Served? Hands down one of the hottest romance novels I've read (I've read plenty too! But hence why that one got five stars from me. *winks*).

Did I mention the no-love-triangle bit? Please believe me when I say this! I HATE love triangles. The title and the cover of this book is misleading, in that aspect! There is no love triangle, no cheating, no secret babies/children/pregnancies/abortions/etc. The "secret" that Nora has that Crosbie finds out - it's really not that bad. And it has nothing to do with a love triangle or anything I just mentioned. YES, at first Nora thought that she would start to develop feelings for Kellan, the school's player playboy (since she would be living with him and seeing him all the time); but it's Crosbie that catches her attention and steals her heart!

New Adult books always have drama surrounding the climax of the book. In this book, the drama is Crosbie finding out Nora's secret. The thing is, I hate drama, and I will tell you right now, the "drama" is not bad at all. Crosbie is mature and smart - I'll leave you with that. There is no unnecessary drama and/or miscommunication in this book (thank goodness). Both Crosbie and Nora act like grown people who are at a crossroads, but love each other. I LOVE that they communicate, and they don't just leave things as they stand. I'm trying to be as vague as possible, I promise!

Ahhh, this book. It was quite possibly as perfect as it gets (for me). I don't necessarily consider myself an expert on NA books, but I will say that I've disliked most of the NA books I've read, and yet, this book was lovely. I trust Keyes and I will definitely be looking out for Kellan's story in the (hopefully not-so-distant future!

I really can't think of anything terrible that stuck out to me! This is rare occurrence.

I totally recommend this novel! Specifically to anyone who enjoys New Adult romance and/or adult romance. This author knows what she's doing in terms of both age levels, and I have complete faith in her whenever I see a new book by her. Seriously, if you want a strong female protagonist, imperfectly sweet and swoony male protagonist, HOT/STEAMY romance, and a great HEA? Try Julianna Keyes' books. Especially this one!

5 stars. Hands down the best New Adult book I've read. I recently read Elle Kennedy's The Deal and I really liked it, but this one takes the cake. Being a "new adult" means I sometimes I find it even harder than your average person to connect with some of the protagonists in New Adult books, but I really connected with Nora, and Crosbie!