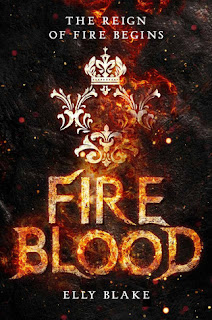 In this action-packed sequel to Frostblood, the future of Ruby's world and a court ruled by the love of her life depends on the uncovered secrets of her past..

Against all odds, Ruby has defeated the villainous Frost King and melted his throne of ice. But the bloodthirsty Minax that was trapped inside is now haunting her kingdom and everyone she loves. The answers to its demise may lie to the south in Sudesia, the land of the Firebloods, and a country that holds the secrets to Ruby's powers and past....

Despite warnings from her beloved Arcus, Ruby accompanies a roguish Fireblood named Kai to Sudesia, where she must master her control of fire in a series of trials to gain the trust of the suspicious Fireblood queen. Only then can she hope to access the knowledge that could defeat the rampaging Minax--which grows closer every moment. But as sparks fly in her moments alone with Kai, how can Ruby decide whom to trust? The fate of both kingdoms is now in her hands.

Yes, I am worried about That Sentence in the synopsis (and I'm not happy about that line). Yes, I am still looking forward to reading this book. Consider me your guinea pig! I did love Frostblood a lot. =)
Posted by Alyssa at 12:00 AM