Happy Friday, friends! Today I'm reviewing Ex-Con Parts I, II, and III, by Katana Collins. I received the Ex-Con Serial for review (all three parts) so I'm going to review the series all at once. I'm not sure where each part breaks off, since the serial combines the three seamlessly. Off I go! 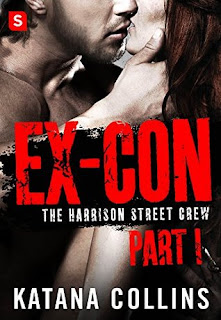 Volume One of a three-part volume by Katana Collins.

Ex-convict Shane McGill is as rugged and wild as they come. Bad to the bone and back on the streets, he’ll do anything and say anything to survive. Even if that something means joining the one car club he had worked so hard to avoid. But there’s one person out there who can match him toe-to-toe...the hot mechanic pin-up doll of a woman with the body of a goddess and tomboy attitude would even give him a chance. 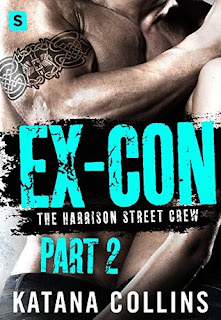 Volume Two of a three-part volume by Katana Collins.

Charlize “Charlie” Wakeman fixes cars and doesn’t suffer fools. But when the hot as hell ex-convict Shane McGill enters her mechanic shop, she can't resist one wild night with him. It was just meant to be a fling…the wildest, most thrilling fling of her life. But Shane’s too ruthless, too bad to ignore, and Charlie can’t stop herself from coming back for more. 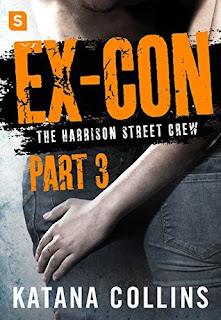 Volume Three of a three-part volume by Katana Collins.

Shane McGill learned one thing from prison—if you get a second chance, don’t screw it up. Shane doesn't regret a single second of his life once he's found Charlie. She’s the happiest, hottest, most important thing to happen to him. But as tensions rise in the Harrison Street Crew, his relationship with Charlie takes on a new level of heat, and danger…


This is a review of all the combined serial version. I received the Ex-Con Serial for review, and the serial combined all three parts of the book into one seamless story. I do not know where each part ended and the other began, so I cannot do a separate review for each part of the serial.

I read an excerpt from Part I of the serial, and I was hooked. I haven't read too many books featuring ex-cons - the exceptions being Julianna Keyes' Time Served, and Sophie Jordan's amazing Devil's Rock series (All Chained Up, Hell Breaks Loose, and Fury on Fire - so far). I love Time Served and the Devil's Rock series, and after reading those books, I've been less leery of ex-con stories. The excerpt of Part I of Ex-Con that I read was phenomenal and so intriguing, and I'm really glad I stumbled upon it by chance, because I ended up loving this serial novel!

Shane McGill has been released on parole, after serving four years in prison for a crime that isn't quite revealed until close to the end of the serial (probably in Part III, if I had to guess - again, I don't know where each part starts and stops). His beloved car has been sitting untouched for four years, and he needs work done on it. He makes a deal with Charlie Wakeman, a sexy mechanic: he'll work at her garage for free and she'll fix up his car. Neither of them expect the intense chemistry between them to boil over. Neither of them expect the other to be involved with one of the city's dangerous gangs. Neither of them expect the other to discover all of each other's painful secrets, and still fall for each other.

I read the book as one cohesive story (and not by parts), and I absolutely love how the story was told. The progression and pacing of the story is beautifully written. I wasn't quite expecting that, since the story is split into parts, but I loved how well each part fit into the other, and how much happened in this book.

Both characters are so complex and unique. Shane has just completed his time in prison, and wants a fresh start. He has been denying it to himself, but he knows he can never truly escape from HSC (the gang he is involved with). He agrees to do street races with them, which is how he gets involved with them again, after being in prison. Shane has to repair his car, his life, his problems with HSC, his relationship with his little sister... I really felt for the guy. He is so good and so noble, a true white knight in shining armor, even though he's an ex-con and a criminal. He is also super hot (like steam coming off the pages). I didn't think I would like him this much, but I did. He is such a good guy and a decent person. He's an alpha male with a brain and a good head on his shoulders.

Charlie is a feisty, independent, take-no-crap kind of girl. She likes fixing cars and having her own garage, but she owes a lot of money on the garage, which is how she started street racing for HSC. That, and she loved the thrill of it. Charlie got out of an abusive relationship and sought out the thrill of street racing. The topic of the abusive ex-boyfriend (ex-fiance, really) comes up a lot in the book, and it becomes a huge part of the story. Her ex is her best friend's brother, and the best friend (Michelle) is a really important person in Charlie's life. I liked Charlie, though occasionally her "you-can't-tell-me-what-to-do!" rants got annoying. Sometimes she wouldn't see reason because her head was so far stuck up her butt, trying to be Ms. Independent.

The female friendship in this book is wonderful! I love how Michelle and Charlie always have each other's back, but they also tell each other how it is. Michelle never holds back, which Charlie definitely needed sometimes. These two ladies have been through a lot together, and I love how powerful and strong their friendship is.

Okay, okay, the romance. I absolutely loved the romance. Things started off steamy and progressed into inferno-like fiery pretty quickly. Which I didn't mind at all! The emotional side of things also progressed rather quickly, but I didn't mind and I thought this work well in the story. The chemistry between Shane and Charlie is on fire! The pair were liable to start burning up, every time they were in the same room. And yet, things weren't all physical between them. I love how sweet Shane is with Charlie, and how Charlie doesn't take crap from him BUT also isn't quick to judge him. They are a wonderful (HOT) pair, and I loved watching them fall for each other.

The "other" plot besides the romance is interesting because it involves both characters, though they aren't aware of this at first. Both Shane and Charlie are involved in street racing, and Shane cuts a deal with HSC to get Charlie out (which puts him back in, unfortunately). Shane works through issues relating to the reason he went to prison, and his relationship with his sister. Charlie works through her own issues, involving her keeping silent about her abusive ex. Meanwhile, someone is trying to frame Shane for something... it all comes together, at the end of the book (which is the end of Part III).

Overall, I am highly satisfied with this serial! I'm glad I had the opportunity to read it as a cohesive novel, though releasing it in parts is an interesting idea. I enjoyed this book a lot - it's a wonderful and steamy story about an ex-con who is a decent guy on the wrong side of the tracks, and a mechanic who wants a little independence after a horrible relationship. It was the first book I read by Collins, and I liked what I read!


Not a big deal, but sometimes Charlie got on my nerves a little. I understood her need for independence, after being in an abusive relationship for so long. But sometimes she shut down others (Michelle and Shane, specifically) and dismissed their advice and concern because she was so focused on being independent. I feel like she threw tantrums and stomped her feet too many times, yelling about how she didn't want anyone to tell her what to do. I understood where she was coming from, but she acted really stupid sometimes. No one was trying to control her - they were trying to give her solid, unbiased advice, but she acted like everyone was trying to tell her what to do. Girl, calm down!

Again, not a big deal - this happened maybe two or three times, and I understood where she was coming from. But it was a little annoying to read!


I personally recommend this series, if you like adult contemporary romance. This story is very different and unique and it challenges the way one might view an ex-con. Both characters have dark secrets and both have a lot of emotional healing to pursue. I dare you to read this book and NOT fall in love with these two - it's impossible, I promise! Their chemistry is hot and their romance is hard-fought and heartwarming, in the end.


4 stars (for each part, and the book overall). I cannot wait to read the Outlaw serial! Patrick and Michelle had some serious chemistry in this book, and the sneak peek at the end was so hot... I need all of the parts of Outlaw as soon as possible!